The second highest number of queries to the national Alzheimers helpline came from Cork last year. 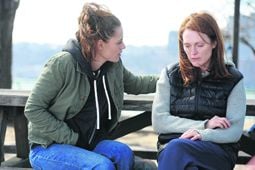 Julianne Moore (right, with Kristen Stewart), plays Alice Howland, who is in the early stages of Alzheimers in the Oscar-winning drama Still Alice. It is estimated that there will be 147,000 Alzheimer’s sufferers in Ireland by 2041.

THE second highest number of queries to the national Alzheimers helpline came from Cork last year.

In Cork, there are currently 5,425 people living with dementia, with a total of 48,000 suffering nationwide. And by 2041 that number will have risen to 147,000, making it a significant public health issue.

The helpline, which is open six days a week and is manned by trained staff and volunteers, is the only national dementia helpline in the country.

The emerging trend of people with early stage dementia contacting the helpline directly has been welcomed by the ASI as it strives to continue to empower people to live well in the community for a long as possible following a diagnosis.

Helpline manager, Samantha Taylor said: ‘As our ethos is to place the person with dementia at the centre of everything we do we are encouraged to see more people with dementia contacting us directly as well as on behalf of their loved ones.

‘The numbers of people diagnosed with dementia are expected to treble by 2041, so a national dementia helpline is a vital resource.

‘We would appeal to anyone who has concerns about dementia either for themselves or for a loved one to call our helpline and speak to one of our trained advisers today. Don’t wait, just make that call.’

The data also demonstrates how female relatives made up the vast majority of callers (77%) to the helpline in 2014, which would support recent research released by Alzheimer Research UK.

Women appear to bear the brunt of dementia, both in terms of higher prevalence rates and by virtue of the fact that they are 2.5 times more likely to look after someone with dementia.

The study warned that dementia is leaving women marginalised, both as carers and later as patients.

In Ireland the rate of women developing dementia far outweighs that of men. Latest figures reveal

Ms Taylor added that it was clear from the complexity of calls and emails that people living with dementia and their carers need support throughout every stage of their journey.

‘This condition affects, not only the person who is diagnosed and their immediate loved ones, but all family members, relatives and friends, and in a wide range of ways,’ she added. The ASI helpline is open Monday to Friday from 10am to 5pm and on Saturday from 10am to 4pm on 1800 341 341.