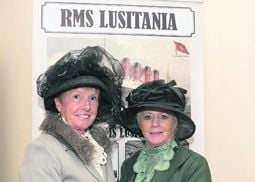 Locals Pauline Pollard, left, and Joan O’Donovan at the official opening of the Lusitania Commemorations in the Community Hall in Courtmacsherry.(Photo: Martin Walsh)

MARINE Minister Simon Coveney spoke about his close affinity with the sea when he visited Courtmacsherry last weekend, as part of the Lusitania100 commemorations.

Minister Coveney, himself a seafarer, talked about his great fondness for the RNLI and the great voluntary work they do. The Minister was loud in his praise of the crew of the lifeboat who rowed out the 12 nautical miles to the rescue and the carnage they witnessed.

Others who contributed to the opening ceremony included Brian O’Dwyer; Darra Gannon; Gerard and Richard O’Flynn; County Mayor Alan Coleman; Sean O’Farrell; and Declan Keegan, whose grandmother (May Barrett) was one of the survivors.

MC for the occasion was Vincent O’Donovan, and the Clonakilty Brass Band gave an hour-long performance before the start of proceedings.

A group of ladies who had travelled from Cobh for the weekend, in traditional dress of the time, matched the local ladies, as both groups recalled the ‘Category One’ ladies on board the Lusitania.

Due to the weather, the event planned for the pier had to be moved to the Community Hall, which was packed to capacity. Present were people from many parts of the country, and also from America including Pennsylvania, California, New York and Boston, all of whom had relatives travelling on the boat.

A very moving ceremony took place in the Pier House at 6pm, prior to the official opening, when the local committee brought together descendents of the original lifeboat and some relations of the survivors of the tragedy.

It was an occasion greatly appreciated by both groups, especially the survivors who expressed their admiration and appreciation for the efforts and organisation of the local committee.

After an illustrated lecture and presentation by esteemed Lusitania author and diver, Paddy O’Sullivan, on Saturday night, it was off to the Blind Strand after First Mass on Sunday morning for a re-enactment of the RNLI Lifeboat Callout.

For this, the Church choir performed the Lifeboat song Home From the Sea and descendents of the fourteen crewmen narrated the story.

Captain Turner got due mention a few times as he was plucked from the water by a fishing boat.

There are currently three exhibition centres in the village – the Community Hall, the Lifeboat House, and the Church of Saint John.