IT’S the first Chinese-built car on sale in Ireland and it’s also electric.

Which might seem not quite the mix to sport the iconic MG badge.

But the MG brand is owned by the Chinese state-owned company SAIC Motor, one of that country’s ‘Big Four’ carmakers, and the MG ZS EV is the company’s first production electric car under the MG name.

The car is based on a previously existing small SUV developed by the company and launched in 2017 with a 3-cylinder petrol engine.

When the Frank Keane Group took on the Irish MG franchise late last year, the decision was to concentrate on electric and hybrid models.

The ZS EV sits in the middle of the size space between Opel’s Crossland and SEAT’s Ateca, both of which I have reviewed recently. And while there’s no reason to believe it should be otherwise, it is well competitive with both in style, roominess, and finish. Was I surprised? Well, only to the degree that the first Chinese cars aimed at Europe which I saw at a Geneva Motor Show some years ago had a little way to go then. Bias lingers, unfortunately, until experience demonstrates that it shouldn’t.

The MG badge fits well in the smart exterior of the ZS EV, which has good lines and details that are clean and very non-fussy. 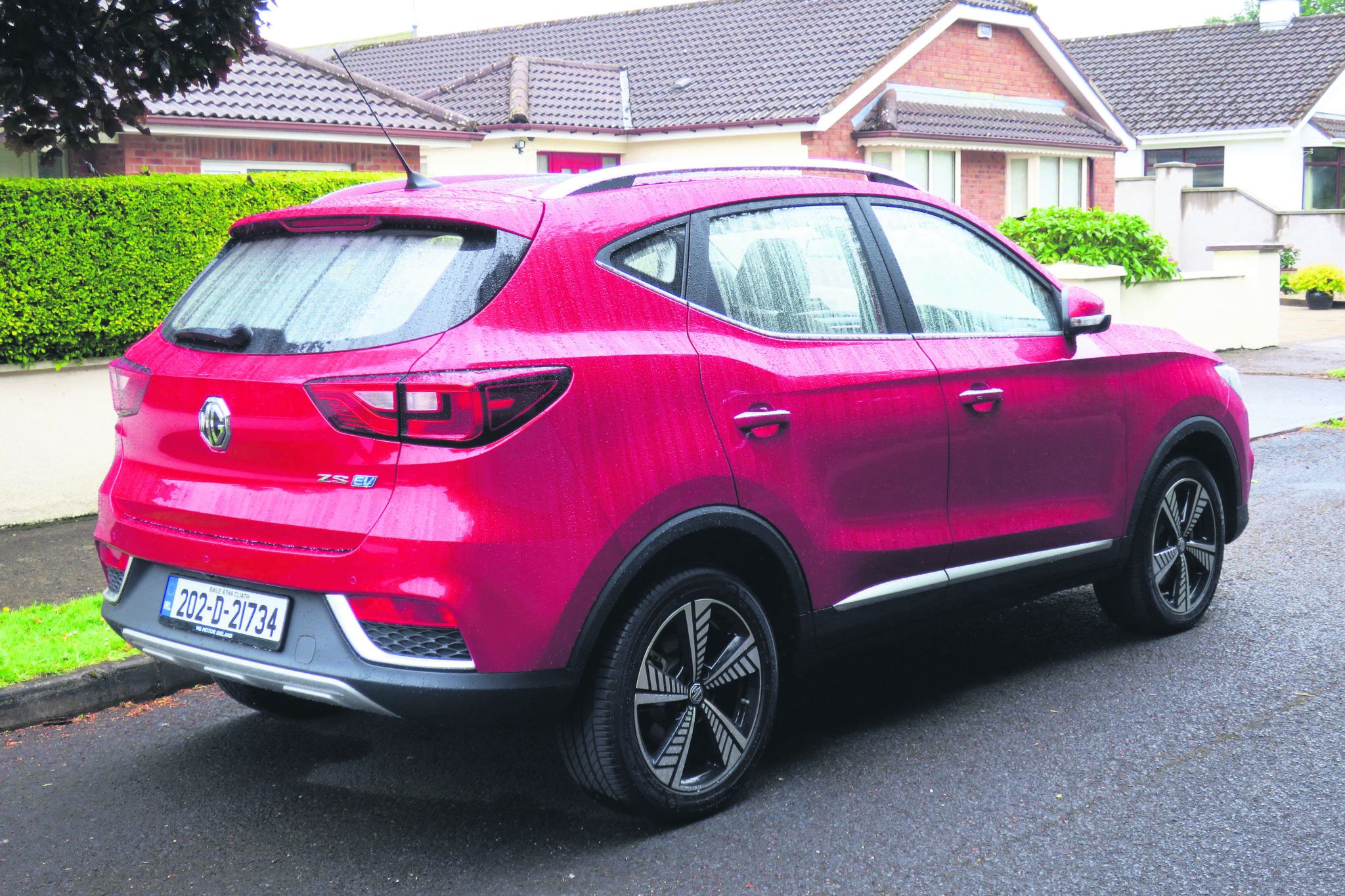 There’s an edge of enthusiasm in the style even as an SUV which seems to fit the sports heritage of a badge going back to the 1920s. In the red of the review car, it does look the sporty part.

Inside there’s a bit more shiny detailing than we’re maybe used to these days, but it’s just nicely short of overdone.

The materials of the dash and trim are up with anything in the class, and in the upper Exclusive of the two grades it was enhanced by artificial leather with contrast stitching in various areas including the seats and steering wheel.

In case you might forget, the big MG logo in its hexagon on the wheel boss keeps the brain’s sporty synapses flickering.

Neat traditional dials offer clear information, although some of the details in the info pad between them could use larger graphics. The screen in the centre dash is a good size.

It may be officially a B-segment car, but like most crossovers in this space there’s more than ample room in the rear, and a 448L boot capacity in its well-finished area is respectable. The Exclusive grade also gets an opening panoramic roof.

As mentioned, it is, of course, a fully electric car.

With that comes swiftish acceleration of 8.6s to 100km/h if you use the Sport drive mode. As with all EVs, there’s no engine sound, one reason why road noise may seem more apparent. But it’s all a good experience. 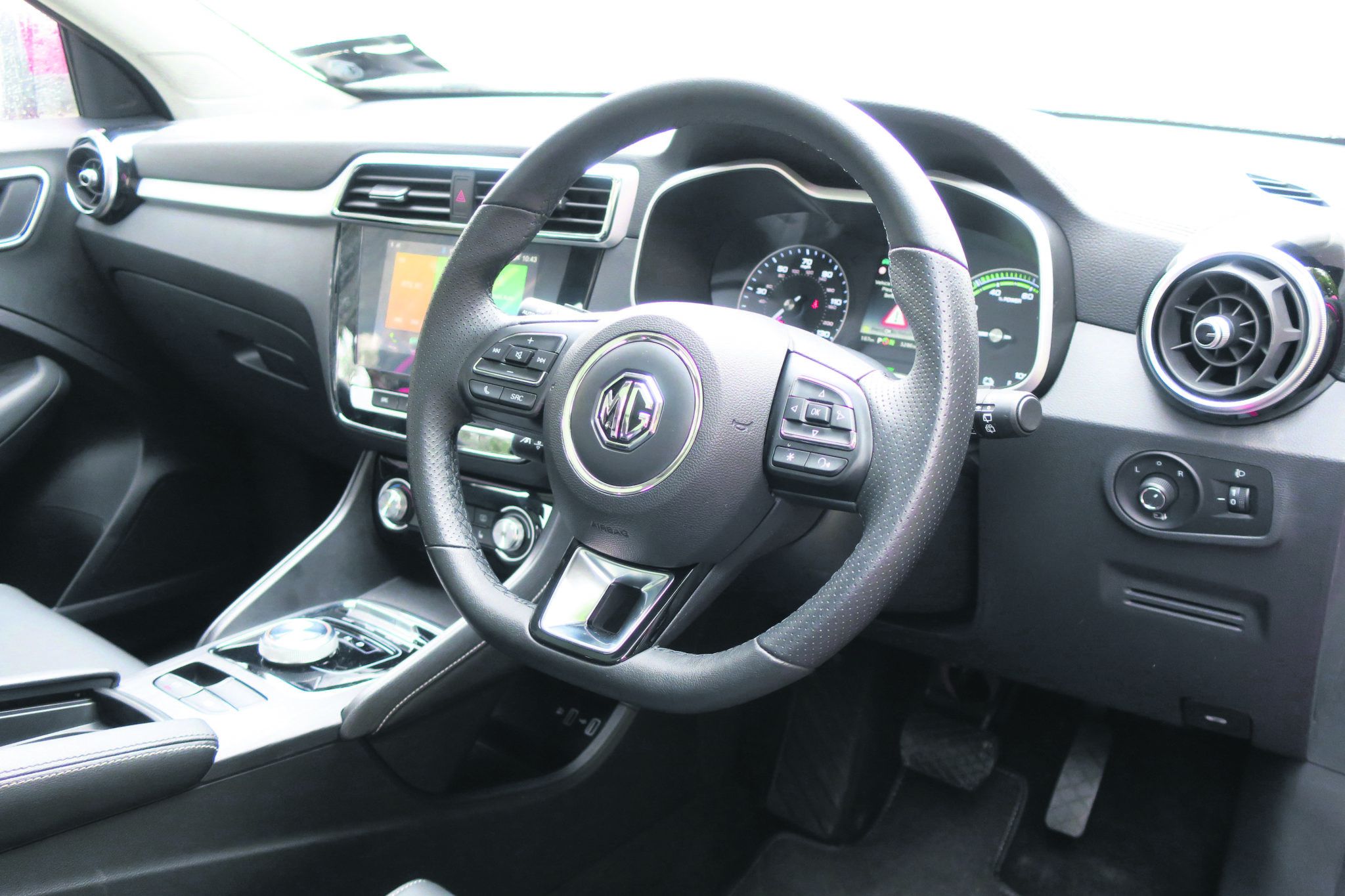 One thing I’d like to see: shifting the regeneration strength is by a toggle switch on the centre console, but I prefer when steering wheel paddles are used, because they allow for more responsive regenerative driving downhill, or in changing traffic.

The battery in the ZS EV offers a rated 263km, which is on the middle range in these times but that does allow for a more affordable car.

The upside is that the vehicle can be charged quite quickly at a suitable public charge point. I took the opportunity to measure this at my local Circle K and found that you could get a 30km get-you-home in 10 minutes, and take on 90km in 23 minutes.

I also found that by travelling the same distance on standard roads and traffic instead of by motorway, I got 20pc extra range.

OK, nerd stuff, maybe, but in normal day-to-day driving, the range seems quite easy to live with.

I found the MG pleasant, responsive, and a reasonable handler to drive, and certainly I wouldn’t put off anyone looking to it for a decent-sized electric family car. A good sized car for the money.