Ber Downey on her spinning bike at home, just six weeks into her treatment.

Ber Downey on her spinning bike at home, just six weeks into her treatment.

Brian and Ber at a triathlon just a few weeks before her diagnosis.

On her spinning bike at home, just six weeks into her treatment.

Urging people to support Daffodil Day, a Clonakilty mum-of-three shares her cancer story to offer hope to anyone struggling with a diagnosis, and to encourage all women to attend their routine screenings

WHEN a letter arrived in the post advising her to book a routine mammogram with BreastCheck, Ber Downey’s first thought was: ‘Why are they sending this to me? This is something for older women.’

At the time the Clonakilty woman had just turned 50, was a busy mum-of-three and was working full time as a community mental health nurse.

She was also in peak fitness, regularly competing in triathlons and thinking nothing of taking a fast 120km spin out on her bike.

Looking back to that time in 2018, sure she felt tired, she remembers. But who doesn’t?

The next month the family enjoyed a glorious holiday in France, and shortly after returning Ber got a letter from the screening service with a date for an appointment. It was for a Wednesday, her busiest day at work, so she rescheduled for their mobile screening unit in 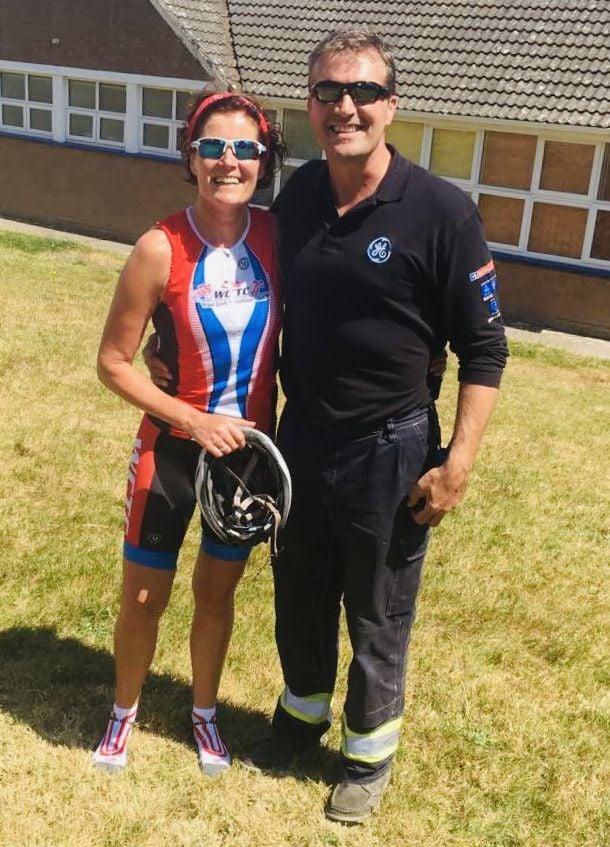 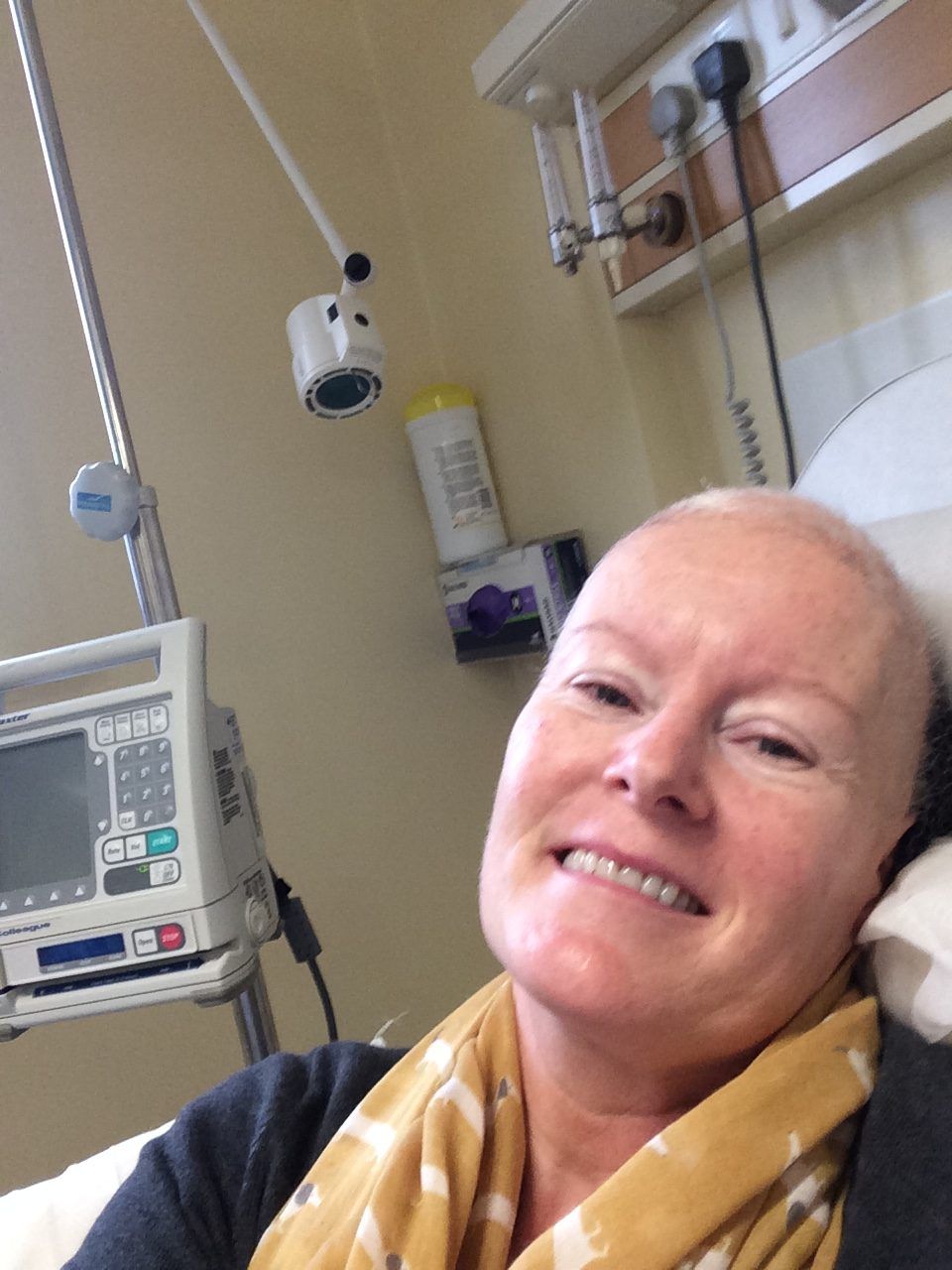 Receiving treatment at the chemo unit in CUH 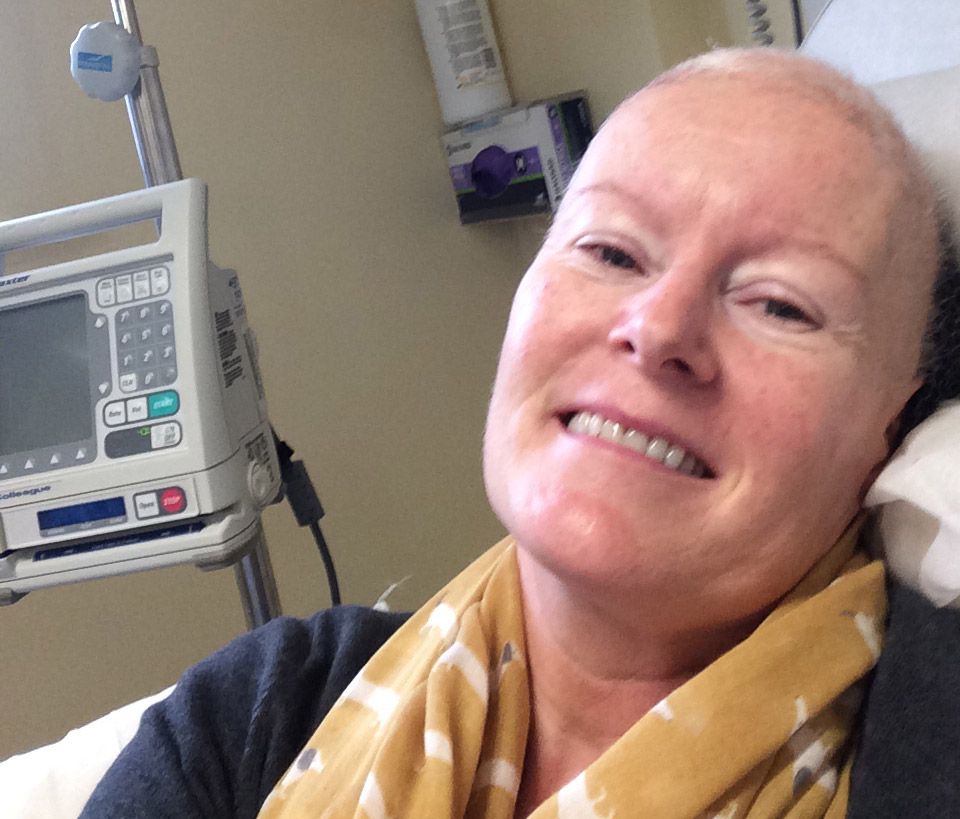 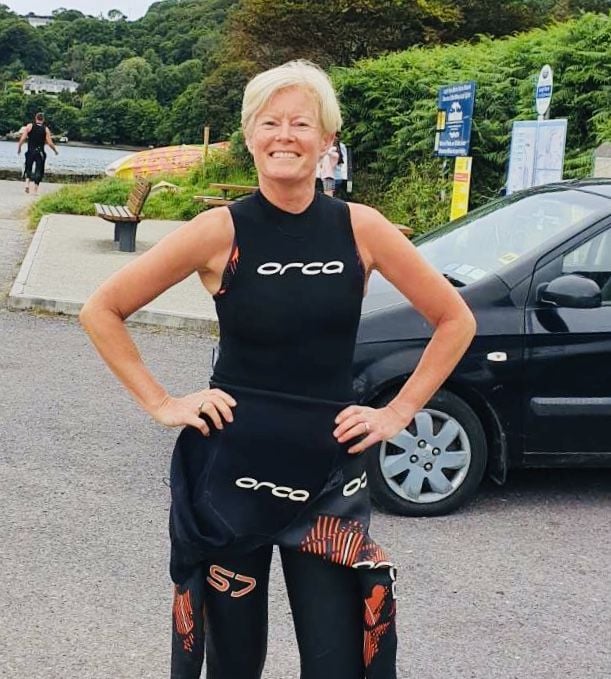 On her spinning bike at home, just six weeks into her treatment.

She popped in on her lunch break and got the job done, and thought nothing more of it. That was on August 23rd 2018, and within two weeks Ber had been given a breast cancer diagnosis after an aggressive tumour was detected.

‘Initially it was very frightening and traumatic,’ Ber remembers. ‘It came as a huge shock. There was no family history of the illness, I was very fit and healthy.’

Ber says her immediate instinct was to protect her three kids, Moss (now 21), Áine, (19) and Cian, (17), from her illness, while still being open about it.  ‘They were just starting their first week in college, Leaving Cert and Junior Cert respectively. The timing was awful for them. My husband Brian and I knew that telling them would be like an explosion in their worlds, but we wanted it to be like a controlled explosion.’

Describing herself as a strong and positive person, Ber said she broke down her treatment plan, her mastectomy and 14 months of chemotherapy, like she would do a triathlon training plan.

‘There was the surgery, six weeks recovery, then 14 months of treatment, so I broke it down in my head into stages. It made it feel more manageable,’ she said.

After surgery she was unable to drive for three weeks, and friends would regularly call to take her to the beach for a walk where she focused on building herself up for her chemotherapy.

‘Every day I pushed myself to walk a little bit further. I’d encourage anyone in that situation to really focus on those small things and be grateful for them.’

Her weekly chemo, which began that November, left her very ill: ‘I went from being someone who could cycle 120km at speed, to someone who some days couldn’t even get dressed or get out of bed, but I always chose to focus on the things I could do. Some days that was just being able to sit up in bed and have a cup of tea, another day it was being able to come downstairs and lie on the couch and watch TV with the family. I just went with it, did what I could, and let the rest go.’

Ber, originally from Mullingar, said she was overwhelmed by the kindness and offers of help from people. Friends rallied around her throughout her treatment, cooking dinners and leaving them on the counter top while she slept, collecting the kids, driving her to hospital appointments and making a difficult time that little bit easier.

‘I know that I am also very lucky to have Brian by my side. He is my rock and was an incredible support to me and the kids. We are talkers and that really helps when times are tough. I would encourage anyone who is going through a cancer diagnosis to talk about their experience, if not to a loved one, then to access the free counselling that the Irish Cancer Society offers.’

Having worked as a mental health professional for 20 years, Ber had tools she could apply to her path to recovery.

‘I chose to be grateful I was diagnosed and had treatment options, instead of being angry about it. I think that helped how I approached everything that followed,’ she recalled.

As soon as she was able, Ber got back to training and after nine weeks of chemo she was back on her bike, and building herself up slowly.

‘The first cycle I did was 16km surrounded by five close friends. The sense of achievement was enormous. I felt like I had just won the Tour de France!

‘There were some days I was able for it, and lots of days I definitely wasn’t. I suffered massive fatigue and nausea from my treatment,’ she said.

But sport and fitness was a huge part of her identity: ‘I love being out in nature, swimming, cycling and walking. It makes me feel very alive. I was very determined to maintain as much of that as was possible throughout treatment. Also, it was very good for the children to see me training as it was a strong message to them that I was doing well.’

Ber lost her hair as a result of chemo, which was very upsetting. ‘I had red curly hair and when I lost it, I felt I was no longer me, but I really was a cancer patient. There was no hiding from it. There were lots of side effects of chemotherapy that were unpleasant and challenging but I tried to focus on the bigger picture which was that the chemo was killing cancer cells and that was the priority. The side effects would eventually pass.’

In July 2019 she swam the 2km distance around the island in Lough Hyne with the support two friends.

November 11, 2020 marked Ber being one year free from cancer and she decided to mark the milestone by signing up for a half Ironman (2km swim, 90km bike and 22k run) in Barcelona next October.

‘So I’m back training and I’m back at work, but it’s not something you can just forget about to be honest. You learn to live with a cancer diagnosis. It was a traumatic experience and really puts life into perspective – what’s important and who is important to you. I now definitely feel more mindful of what’s going on in my body and am very diligent for any changes.’

Ber says she wants to give hope to anyone who might be struggling with treatment or recovery.

‘I went from a professional who worked full-time and who was training for triathlons to being a full-time patient over night.

‘But I’m back on my bike, and that’s the message I want to give to anyone who might be struggling is that you can get back to doing what you love doing.’

She said it was also essential women kept their screening appointments.

‘I was doing regular self checks and would never have found that tumour until it was possibly to late. I was very lucky.  There’s no doubt that screening saved my life.’