Denis and Collette of Roury Hill Farm near Glandore with students from Purdue University’s Indiana College of Agriculture, who were part of the first farm tour group since the pandemic. (Photos: Anne Minihane)

WEST Cork Farm Tours has hosted its first group of visitors since before the pandemic.

The group of agricultural science students from Indiana visited the farm of Denis and Collette O’Donovan in Glandore where they were ‘blown away’ by the pasture-based system.

West Cork Farm Tours is a business collaboration between local family-run farms set up in 2017.

The tours see the farmers collaborate with local hotels and tour operators, to give both national and international visitors an immersive insight into a family-run dairy farm, and the experience has even featured in the Lonely Planet guide books.

It had been growing steadily until the pandemic hit, but the families are looking forward to getting stuck in once again this season.

Those also involved are John Joe and Theresa O’Sullivan, along with pig farmers Willie and Avril Allshire, all based in Rosscarbery.

Denis said the group of 21 students, and two tour guides, were ‘really impressed’ by the Irish grass-based pasture system.

‘In their part of the world it’s a high input indoor system and they had never seen anything like what we do. We have Glandore Harbour as our backdrop and we struck lucky with the weather on the day so it couldn’t have gone better,’ he said.

The group got to taste some of the O’Donovan’s milk, as well as a sample of Carbery’s Dubliner cheese, which is made from their milk.

‘They couldn’t get over the taste and texture,’ said Denis. 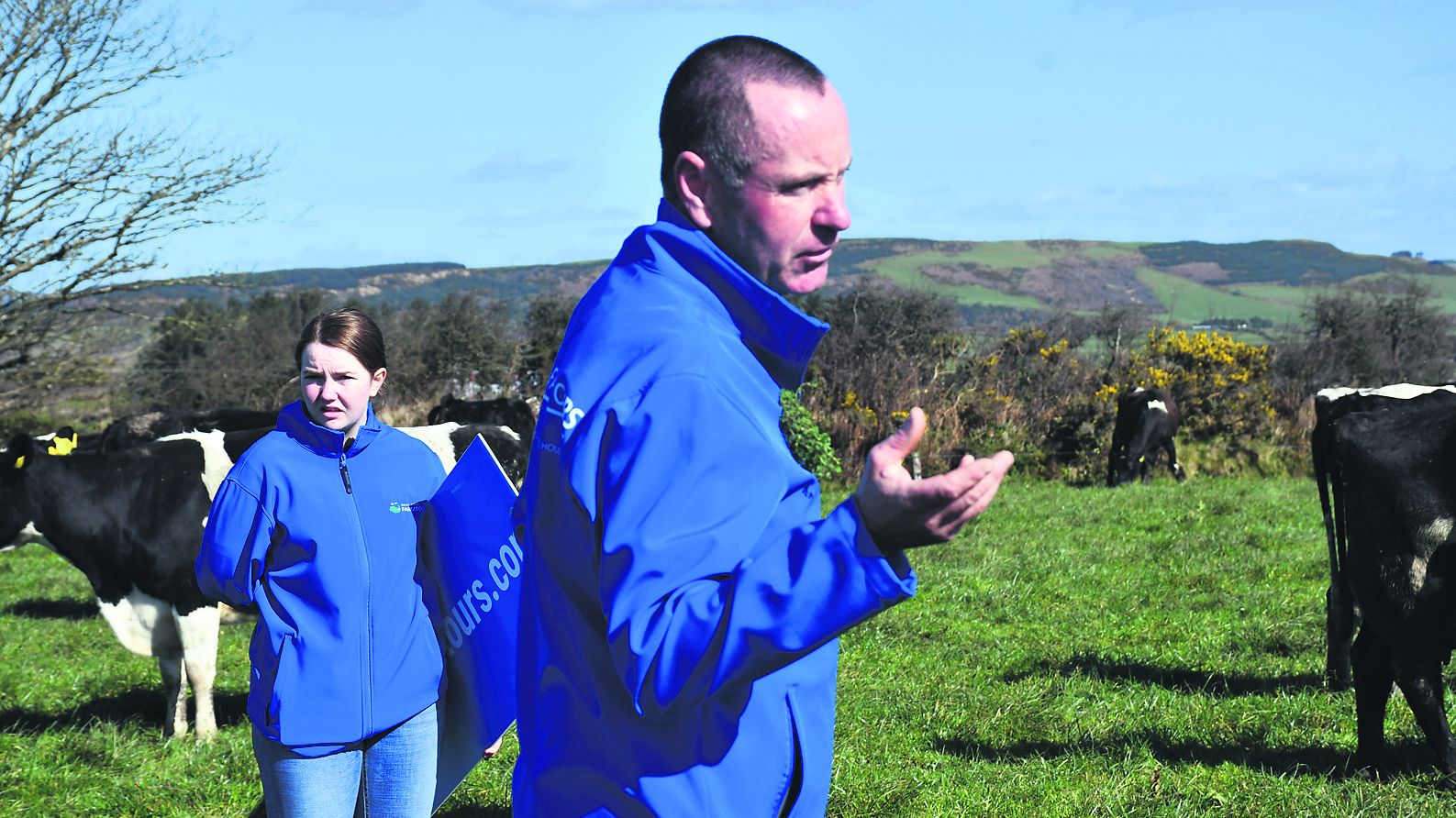 Denis O'Donovan talking to the students from Purdue University, Indiana, USA at his farm at Roury near Glandore.

The group were also very surprised by the sustainable practices Denis has introduced on the farm, including planting a clover paddock to lock in nitrogen.

‘I also explained to them that in Ireland we have the lowest water usage when it comes to producing milk. We only use 7L of water to produce 1L of milk,’ he said.

By comparison, Denis pointed out that it takes 3,500L of water to produce 1L of almond milk.

‘Yet people are being urged to move away from dairy. I’ve no problem if it’s for health reasons, but if it’s environmental reasons to save the planet, they’re very misled,’ he said.

Agriculture in the US isn’t as targeted by government in the challenge to lower emissions, and the group was surprised to learn what’s happening on the ground here.

‘It’s a bit of a bugbear of mine that our government wants to cut emissions from agriculture, yet 90% of the world’s milk will still be produced at a higher cost to the environment from indoor confinement systems,’ said Denis.

Along with the other farmers, they’re looking forward to rebuilding the business post-pandemic, with a Dutch group due shortly.

‘A lot of the work for the tours is done years in advance. The seeds for the Indiana visit were sown two or three years ago, so it is a bit like starting from scratch again. But you only get out what you put in, and we’re committed to this for the long haul. It’s great to be back in action!’ 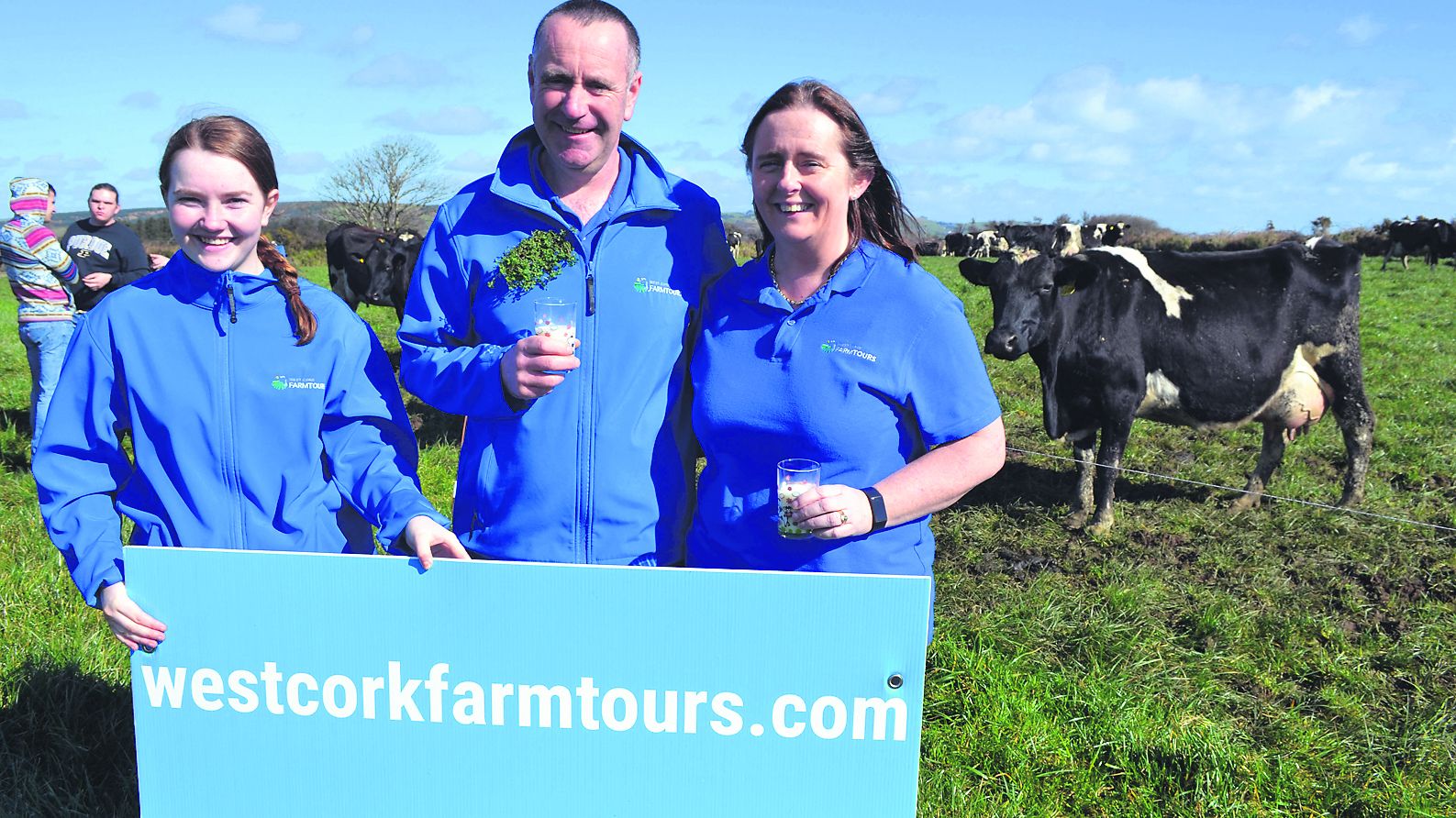 Denis and Collette with UCC agriculture science student Kitty O’Brien, left, who is doing her placement at the farm.