Dairy farming is a critical enterprise in the region with almost 1,900 dairy farmers and 150,000 cows involved, with each farm averaging 80 cows. (Photo: Shutterstock. Graphic: Star Creative)

The latest regional review from Teagasc has some really fascinating statistics. Emma Connolly took a closer look at the local make-up of farms and who is doing the work

The information is revealed in the just-published Teagasc Cork West regional review.

Thomas Curran, Teagasc regional manager Cork West said: ‘Farming in West Cork is vital to the local circular economy in our many towns and villages. It supports a large number of jobs and upstream and downstream industries in the region.’

He said dairy farming is a critical enterprise in the region with almost 1,900 dairy farmers and 150,000 cows involved, with each farm averaging 80 cows.

‘The average dairy farm income is estimated at €94,000, a 28% increase on the 2020 average. The increase was underpinned by a number of factors including good grass growing conditions, increased milk yield per cow and an increase in the price paid for milk. However some increases in production costs were also observed including feed and fertiliser costs which increased by 16% and 10% respectively. Currently the “typical Irish dairy farm” has a herd size, a stocking rate and an average farm size of 83 cows, 2.05 LU/ha and 60 ha respectively. Market forecasts support a strong predicted milk price for 2022. Feed and fertiliser prices have already increased threefold and will reduce profit margins from the enterprise.’ 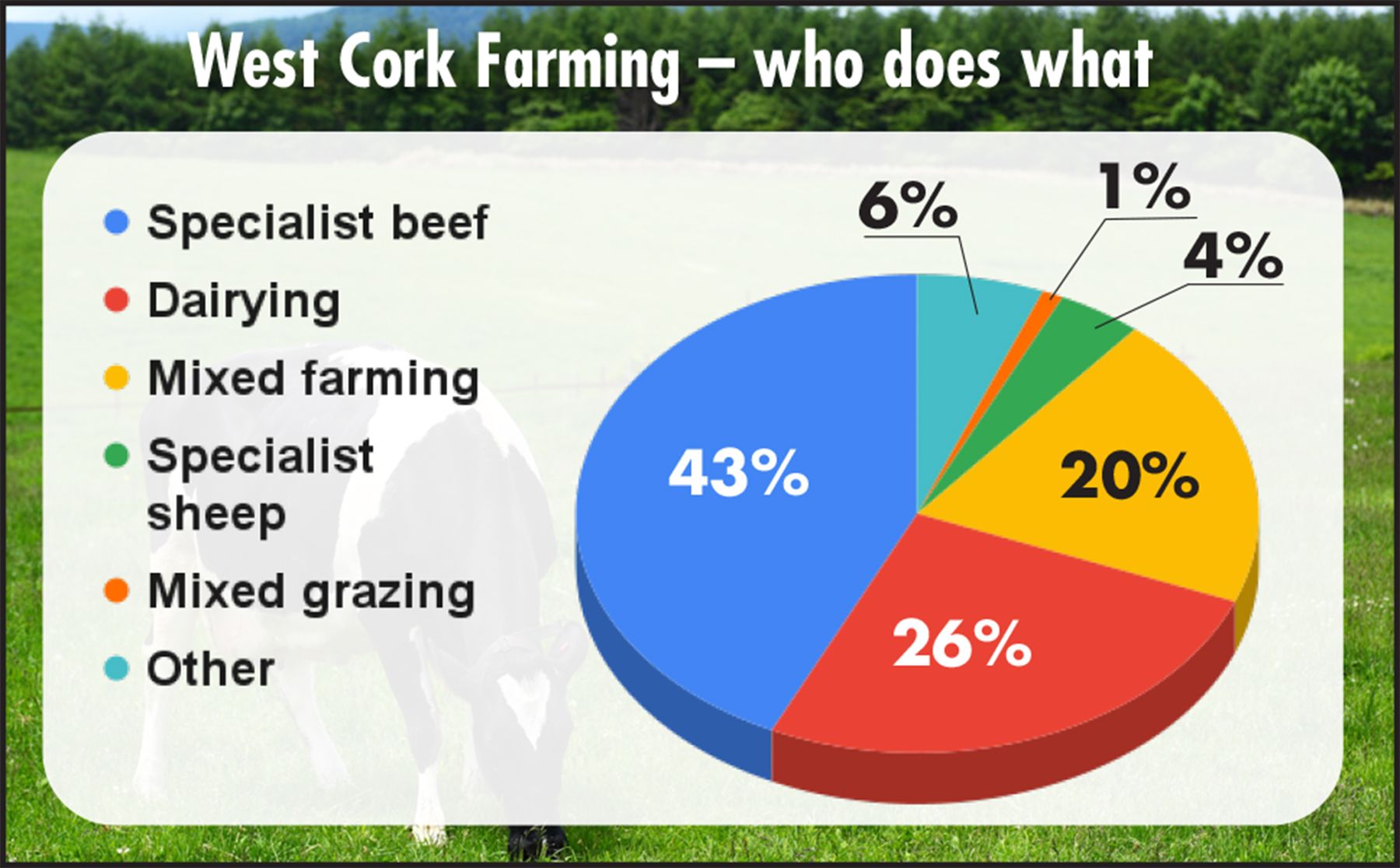 Beef farming is also a significant farm enterprise in West Cork with the majority of farmers in the suckler to weanling enterprise.

‘There is a good proportion of beef finishers in the Macroom and Bandon areas. Beef farmers are generally lightly stocked in the region. High cattle prices in general saw some farmers move to calf to beef systems during the year. 2021 was good year for beef prices in both strong factory prices also driving strong prices in local marts. However, costs also rose during the past 12 months. Weanling and store live prices rose by an average of 8% and 9% per Kg respectively with beef carcass prices 12% higher than in 2020. Total costs rose by an average of 8% due to rises in feed (+20%), fertiliser (+7%) and energy costs (+16%). Driven mainly by strong market prices, gross margin per hectare increased on both on cattle rearing farms (5%) and cattle finishing farms (10%). Both systems saw a modest increase in net margin per hectare,’ said Mr Curran.

Sheep farming is very important in the western and north western part of the West Cork region and on the Beara and Sheep’s Head peninsulas, he said. There are 1,420 sheep flocks in the region totalling 124,531 sheep including 92,190 ewes.

‘Prices were very strong and remained so throughout the year. However, total costs also increased by around 20% resulting in an estimated 26% average increase in gross margin on mid-season lowland sheep systems.

‘It will be critical for sheep farmers to maximise the use of our cheapest feed, grazed grass, to maximise net margin. This is despite high fertiliser costs as to finish lambs on meal is simply not economic and 2021 has taught us that,’ said Mr Curran.

Tillage farming is an important enterprise in the eastern part of our region from Kinsale running northwards towards Killumney.

‘The average gross margins increased by 90% compared to 2020. This resulted in a predicted net margins increase of €525 per hectare compared to 2020. There are significant challenges for 2022 with nitrogen fertiliser prices close to three times the cost in 2020. However this cost is somewhat offset by the continued buoyant prices for cereals at the moment. There is little scope to reduce nitrogen inputs in 2022, with research showing that savings of between 25-35 kg of nitrogen per hectare will result in a minimal loss of yield and increased margins. Rapid incorporation of imported cattle or pig slurry may be an option to help reduce fertiliser costs on some farms,’ said Mr Curran.

There are 13 integrated sow herds with an average herd size of 549 sows plus two breeding herds (average herd size 180 sows) in the Cork West region. In addition to this there are seven finisher herds. Sow numbers have dropped by approximately 2,000 sows (8 herds) in past few years, with five of those now operating as finisher farms. The regional advisory reviews can be viewed at teagasc.ie