John 'Bobs' Daly in action in a Compromise Rules game against Wellington AFL in September 2019.

KIERAN McCARTHY (KMC): Let’s rewind to June 2018, you move across the world to Wellington in New Zealand, get in contact with the local GAA club to join and find there’s already a West Cork link in place. Fill me in.

JOHN DALY (JD): It was winter when I arrived in Wellington which meant the GAA calendar was in the off-season. I did, however, get in touch with then club secretary Kate McCarthy straightaway as I wanted to get involved as soon as the season started. Kate was a physio in Ballineen for a while before she left for New Zealand. Kate served as club secretary for a few years and she's now club vice-president.

KMC: It’s a small world indeed, and seeing how you were coming from a strong GAA background with St Mary’s here at home, how much did joining Wellington GAA club help you settle in New Zealand?

JD: It's great to be able to come to the other side of the world and play our national games. The network you build up through the GAA club is also a great help in getting settled in a new city and country. Through the GAA club here I've met heaps of people from different counties back home who I would not have otherwise met. In a way you actually learn more about Ireland as you're exposed to a more diverse group of people. We have a lot of players here who wouldn't have played that much at home, but they've embraced GAA here wholeheartedly and that is great to see. It can be difficult being so far away from, but the clubs definitely give people a sense of belonging.

KMC: You featured in these sports pages in October 2018 for your GAA exploits with Wellington GAA – what have been the highlights so far?

JD: Winning the Best Player of the Tournament Award at the 2018 Australasian Games was special, as well as winning the club Footballer of the Year gong that season. The first bit of team silverware came when we won the New Zealand Football Sevens tournament in October 2018. That was brilliant as we had to fend off our rivals Christchurch McKennas in extra-time after extra-time to win it.

KMC: Off the pitch, you’ve been very active with Wellington GAA as well and, to be honest, I’d never heard of hurlacrosse before now. Explain that one to me.

JD: I have been the club's Public Relations Officer for the last year. One of the highlights in this role was organising a hurlacrosse exhibition game against Wellington Lacrosse. As you might imagine, hurlacrosse is a compromise rules game between hurling and lacrosse.

We contacted the lacrosse club here in Wellington and met up with their player/coach Ben McCarthy. Ben is a New Zealander, but he told me his great grandfather hailed from a village between Dunmanway and Bantry. Small world, eh!

Anyway, we had a few practice runs at hurlacrosse during the year and we held an exhibition at our social’s Gaelic football finals day in February this year. It was a hit – both sets of players and the spectators loved it and we're looking forward to more games later this year. Hurlacrosse has been played in LA, Germany, Ireland and I believe we held the first game in the Southern Hemisphere. We'll take that claim to fame.

KMC: What’s the GAA scene like in New Zealand and how competitive is it?

JD: We have one club in Wellington; Queenstown, New Plymouth and Hamilton have a club each while Auckland and Christchurch have about five clubs each. We're part of the Australasian Gaelic Football and Hurling Association so we compete against teams in Australia in a couple of tournaments each year.

The season starts in August/September as we're coming out of winter. We train for about two months in the lead-up to the Australasian State Games (early October) and the Feis Sevens tournament (late October). We then play a Social Gaelic Football league in Wellington in November, December and January. People of all levels play socials. It's great fun as quite a few Kiwis play and we have a lot of Irish people who didn't play at home turning out also. During this time the clubs in Auckland and Christchurch are able to play their own leagues and championships as they have a number of clubs in their cities. Mid-January we go back training in preparation for the New Zealand Championships in late March. Last February, along with some players from Christchurch, we sent a hurling team to the Melbourne Pearse's Sevens tournament. The New Zealand Championships were called off in March this year due to Covid-19. 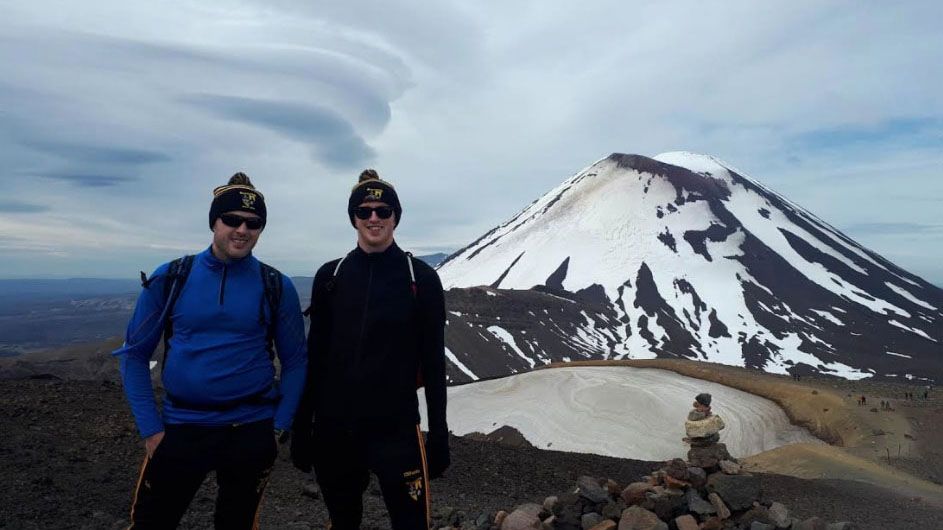 John 'Bobs' Daly (right) and his brother Chris pictured on the Tongariro Alpine Crossing in New Zealand. They are pictured next to the snow-capped Mount Ngauruhoe, which was used as Mount Doom in The Lord of the Rings.

KMC: Looking from the outside in, we all know New Zealand loves its rugby, so how much of a sports-mad country is it?

JD: For a country with a population just below Ireland's, New Zealand does punch well above its weight on the world stage though. People are very active here and participation levels in all types of sport are high. My major gripe with sport in New Zealand is that the fandom at games we enjoy at home just doesn't exist here. Attendance, in general, is abysmal. You'd easily have 45,000 at a national league game between Dublin and Mayo in Croke Park. The Hurricanes (Wellington) and the Crusaders (Christchurch) – the two biggest teams in New Zealand and in Super Rugby – would struggle to get a crowd over 10,000 when they play each other. You do have to fly between cities here, but I still don't understand the poor attendance. I really do miss going to GAA games at home. Even club championship games in West Cork have a more raucous atmosphere than Super Rugby games in New Zealand.

KMC: Talking of home, you’ve been away nearly two years – does absence make the heart grow fonder for family, friends and St Mary’s?

JD: I haven't really suffered home sickness since being here. My brother Chris came over for a month last November and brought some Barry's tea with him. It was a nice treat. You can get Barry's tea here, but it comes at a premium.

The fact that I play hurling and football here means that I don't miss playing with St Mary's too much, but the days when the lads are playing championship I do wish I could teleport back for the games. I haven't been home since coming out here. Hopefully I'll be able to come home for Christmas 2020, but we'll just have to see how this Covid-19 situation plays out.

KMC: Work-wise, what are you up to?

JD: I work in Communications for the Ministry of Education. It has been pretty hectic since we went into lockdown  five weeks ago. Schools are closed here, but classes are still taking place online. I have been working from home since lockdown began.

KMC: It’s great to hear everything is going well. We always hear glowing reports about New Zealand but what do you think makes it a great country to live in?

JD: If you like adventure and the outdoors, then it's definitely for you. In summer, road trips to white sandy beaches with turquoise waters abound and in winter you've got plenty of skiing to look forward to. The weather is favourable; Wellington is the world's windiest city, but it definitely beats West Cork's seemingly incessant rain. There are also plenty of multi-day hikes through some stunning landscapes up and down the country.

New Zealanders in general are amiable people and quite laid back. There's certainly an emphasis on a healthy work-life balance here. And, unlike Australia, there are no snakes and poisonous spiders here!