The Cork senior footballers stand for the national anthem before their Division 2 win against Down at Páirc Uí Chaoimh. (Photo: George Hatchell)

THE late Carbery GAA chairman John Corcoran rarely missed a beat – and his call at the division’s AGM in 2014 to bring inter-county football to West Cork still hits the right note eight years on.

‘I am again calling on the county board to allocate at least one senior inter-county fixture involving the Cork football team to this division where the majority of the Cork football support resides,’ Corcoran said back then, and those words came to mind again after last weekend’s crunch Division 2 tie between Cork and Down at Páirc Uí Chaoimh.

It was a huge game for this struggling Cork football team – but the turnout was very disappointing. With the South Stand again closed, the fans who turned up were dotted around the North Stand.

Cork’s powers-that-be will want to get more fans rowing in behind the footballers, but that is linked to their struggles at the moment. Success breeds success and bigger support. Maybe we need to take the football teams to the fans? In 2019, the Cork U20 footballers played a couple of their John Kerins Cup tournament games in Clonakilty. It was a popular move and a huge success. It brought inter-county football to the people and provided a great opportunity for parents to expose their children to this level of competition. I know national league games have to be played in county grounds but naming a West Cork venue as a county ground would surely help to re-generate support. Something for Cork GAA chiefs to ponder, perhaps.

The good news this week is that Cork footballers are alive and kicking in Division 2 after their four-point win last Sunday, a result that condemned Down to the drop. This victory leaves Cork’s survival in their own hands ahead of Sunday’s final-round trip to Tullamore to take on Offaly. This was an improved Cork performance, too.

From the throw-in Cork were better set up in defence. Rory Maguire and Kevin O’Donovan took up positions either side of the top of the D, shutting down the space in front of the Down full-forward line, particularly dangerman Pat Havern. Cork kept three players up at all times – Steven Sherlock, Cathail O’Mahony and Brian Hurley – with John O’Rourke, Eoghan McSweeney and Daniel Dineen offering support around the middle third and defensively. Ian Maguire and Colm O’Callaghan were physical and combative all through with O’Callaghan having his best outing of the year, contributing two points at vital stages.

This was the first feeling of a national football league victory at senior level for quite a few of the Cork team. It will be a major confidence-booster for this group heading to Offaly this weekend. Down are relegated. Cork sit above Offaly on scoring difference with both teams having accumulated three points from six games. A Cork victory will guarantee Division 2 football next season, and a draw would also keep us above Offaly due to better scoring difference. It's all in Cork’s own hands.

If Cork are relegated, the likelihood is that the Rebels would then drop down to the second-tier Tailteann Cup in the summer, as it’s unlikely Cork will beat Kerry in the Munster SFC semi-final. But would playing in the Tailteann Cup for a season be the worst thing that could happen for this group?

Talking to fans at the game last Sunday there was a feeling that a run of games in the Tailteann Cup would help with the development of this group from football and confidence perspectives, considering that the age profile is so young and that there’s a way to go from a conditioning point of view for many of the panel. Still, there’s no doubt that relegation would be a body-blow to the pride of Cork football. 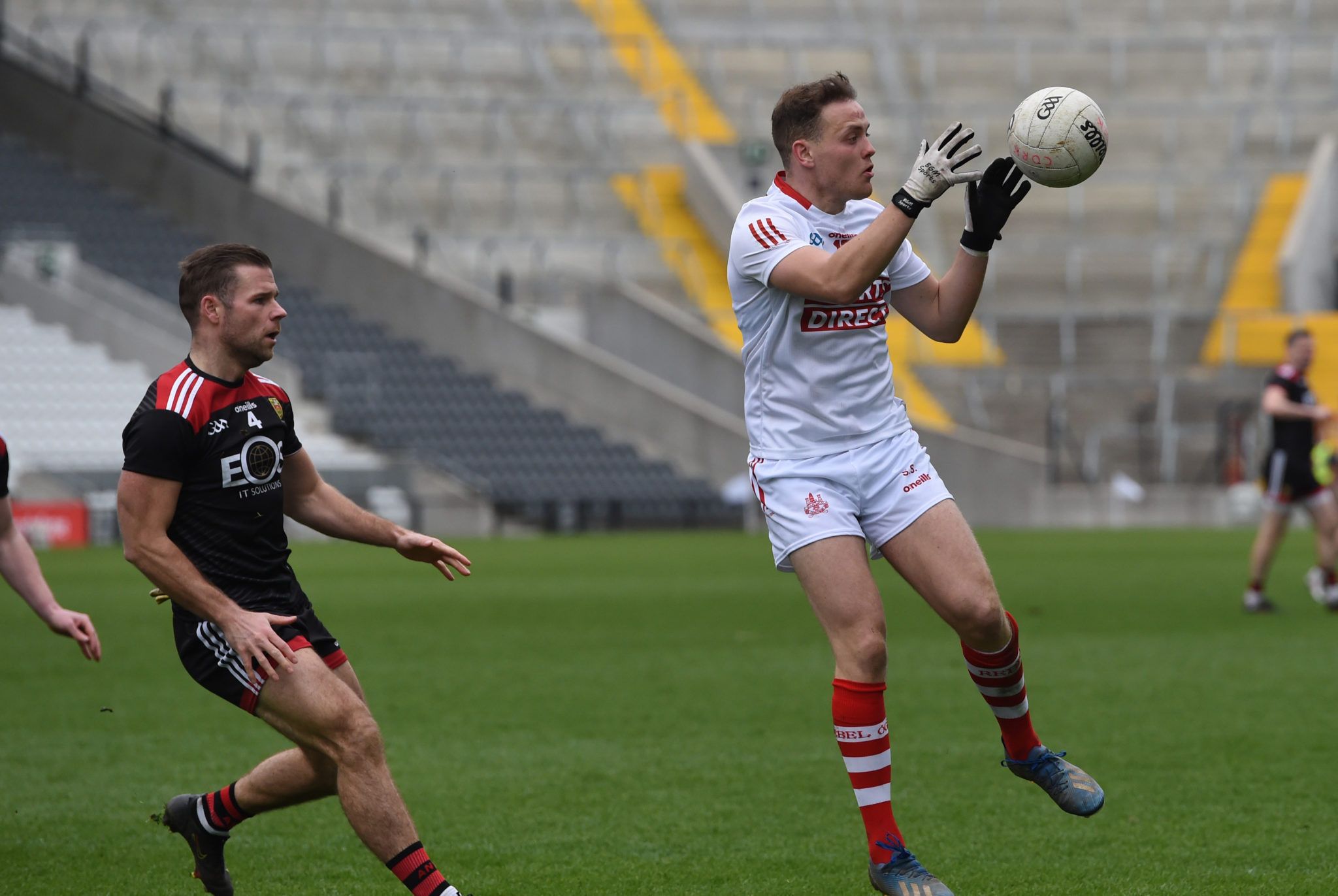 Last Sunday this Down team suited Cork physically which meant the home side coped better in the tackle and under the breaking ball. Shot-stopper Micheál Martin had a decent day in goal, retaining 19 of his 24 restarts and pulling off a great save at his near post prior to Steven Sherlock’s goal midway through the first half. Again, as in previous games, Martin over-favoured kicking to the right and had a short kick-out that went majorly wrong in the first half which could have led to a Down goal if they were more patient.

Kevin Flahive had his hands full with No. 14 Pat Havern but, as mentioned earlier, was better protected. Kieron Histon joined the ever-growing injury list, limping off early to be replaced by U20 player Tommy Walsh from Kanturk who didn’t look out of place. Mattie Taylor really led from the front throughout – he was defensively better and chose his times to drive forward, contributing a superb late point to help seal the win. John O’Rourke was busy throughout and linked the play well but Eoghan McSweeney and Daniel Dineen struggled at times to fulfil the all-encompassing role that the modern-day half forward has to.

Cork's ace in the pack was the firepower brought by the aforementioned full-forward line. Brian Hurley had an off-day but still commanded a lot of attention from the Down back line but Sherlock and O’Mahony contributed 1-10 between them. The question mark surrounding whether Sherlock can transfer his club form to inter-county football has been answered. He finished his goal bravely from a well-timed John O’Rourke handpass. Both Sherlock and O’Mahony generally shot on sight with O’Mahony’s effort, with zero back lift and under pressure, from the 45-metre line in the second half the pick of the bunch.

However, there were plenty of opportunities when they could have been given the ball earlier with the foot, which would lead to the overall speed of play increasing. That along with a better strategy on the opposition kickout, where Down secured 100 percent of their own restarts, are areas that will lead to further improvement this weekend against Offaly.

Cork conceded less frees in scorable positions. They turned the ball over less. They scored 1-11 of their total from play – scoring 12 out of 17 shots from play is a major improvement. They need to step it up again this Sunday against Offaly in a championship-like game where the winner survives but the loser is relegated. But there is a platform to build on after an important win.