At premier senior level, Group B contains the Carbery trio of Castlehaven, Newcestown and Carbery Rangers, as well as Éire Óg, while in Senior A, Bandon, Dohenys and O’Donovan Rossa are joined by Muskerry men Ballingeary in Group A – and this quartet are delivering tension and drama, and after the opening two rounds it’s all in the balance right now.

Like the premier senior, the senior A championship sees 12 club teams split into three groups of four, and the final round of group games will be played on Sunday, October 17th, and there’s a lot on the line, especially in Group A.

There is not much between the standard of the top Senior A teams and those hanging on by their fingernails at the grade higher, as current Kevin McTiernan cup holders Éire Óg, fresh up to premier senior having won the 2020 Cork SAFC title, have shown in their graduation to the top tier this year. A slightly different qualification process is involved in the Senior A championship. Two teams will progress from each group of four to the play-off stages. This will result in six teams qualifying, with the two top group winners (as against one at premier) qualifying for the semi-finals with the remaining group winner and the three second-placed teams qualifying for the quarter-finals.

Right now, any two of the four teams from Group A in the SAFC can make it to the knockout stages. After two rounds, Bandon top the table on three points, only two ahead of O’Donovan Rossa at the bottom, sandwiching Ballingeary and Dohenys in between who both have two points. It really is all to play for in the final round when Skibb play Ballingeary in Aughaville and Dohenys play Bandon in Enniskeane. 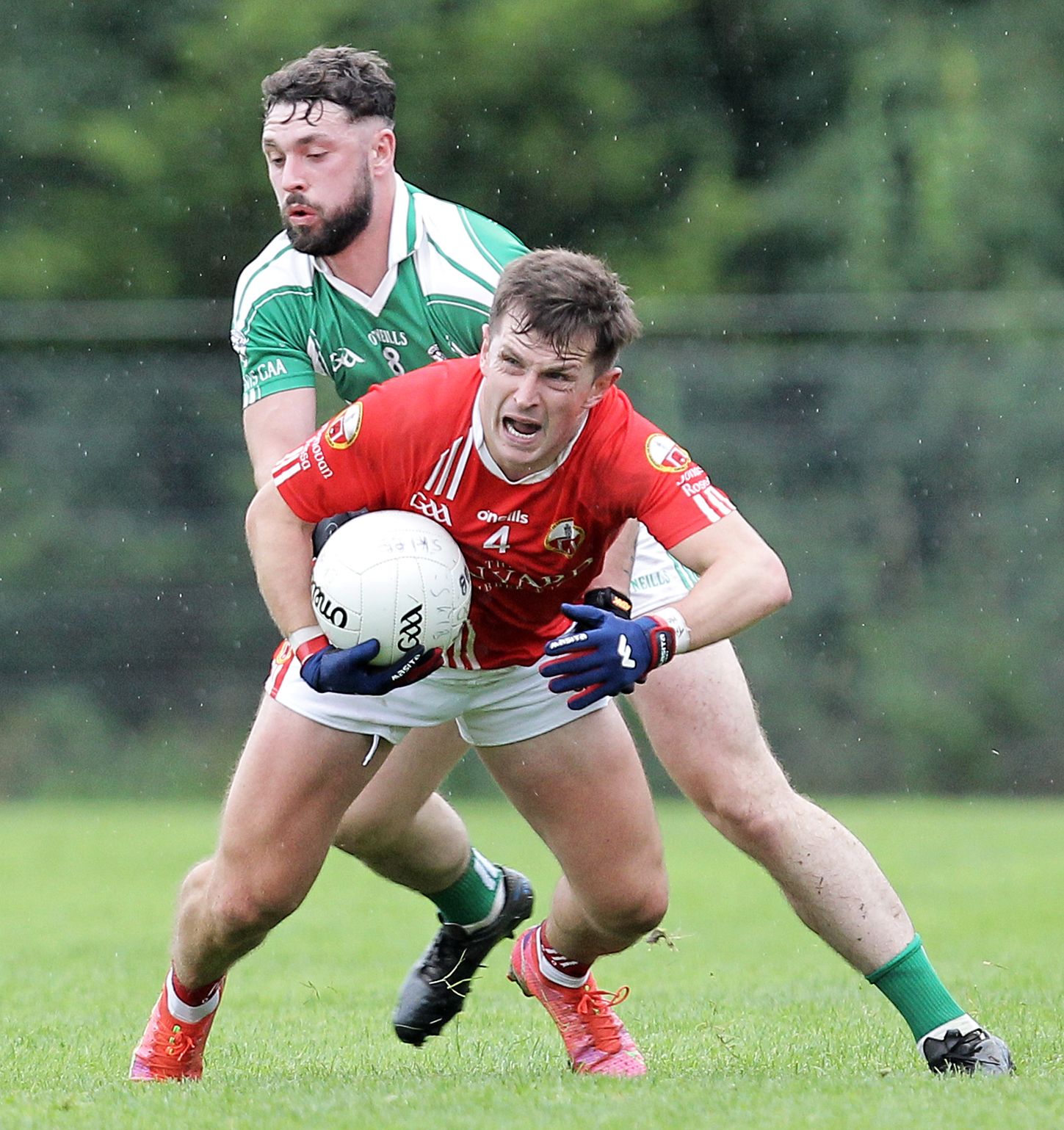 O'Donovan Rossa's Daniel Hazel is tackled by Dohenys' Cathal O'Donovan during the Cork SAFC round two game at Drimoleague.

Dohenys had a very poor showing in their opening contest against Ballingeary, going down by nine points, 2-13 to 1-8, and so went into their second-round clash against near neighbours Skibb with their championship future at stake. No matter how bad the Dunmanway outfit are going they don’t fear anyone. They have courage and fight in spades and that is exactly what they brought to Drimoleague against Skibb. It was, more or less, the same team that lined up in round one but this time they brought a huge work rate, were tenacious in defence and in Mark Buckley and Fionn Herlihy they have match-winners up front.

A tremendous performance in the second half saw them run out winners by 0-17 to 0-11. The sides were level at half time, 0-5 apiece, following a defensive and cagey opening half which was littered with missed chances. Dohenys started the second half with far more focus and kicked the first three points. They kicked seven in a row midway through the second half, and that was their platform for victory. Kerry import Colm O’Shea added creativity and vision to their forward line, Eoin Lavers had a big outing at midfield and Mark Buckley put the game to bed with four superb points in the last quarter.

Dohenys drew with current Group A table-toppers Bandon in last year’s Cork SAFC, and the latter eked out a valuable draw, 2-10 to 1-13, in Ballinascarthy against Skibb in round one this year. In round two they had a narrow one-point victory, 1-10 to 1-9, over Ballingeary, just holding on having failed to score for the last 20 minutes. A loss of shape, some poor option-taking and two black cards invited Ballingeary into the game. Bandon’s fadeaway in the final quarter can probably be attributed to their dual commitments, as it was their fourth consecutive Sunday in action. We need to remind ourselves how far Bandon has come in football in a short period of time. It's only 2016 since they won the county junior football championship.

It was only the width of the upright that prevented Ballingeary midfielder Conor Lynch from landing an equaliser in the dying minutes in a game that Bandon had dominated up to the second water break. Even though they owned the ball in the first half they only went in a point up with Ben Shorten’s opportunistic first-half goal keeping the Gaeltacht side in touch. Barry Collins kicked six points against Skibb and again proved Bandon’s chief score-getter in this game, registering five from play. A draw against Dohenys in the final game will see Bandon progress but expect fireworks in this one. When they met in the group stage last season, it finished level, 0-12 apiece. 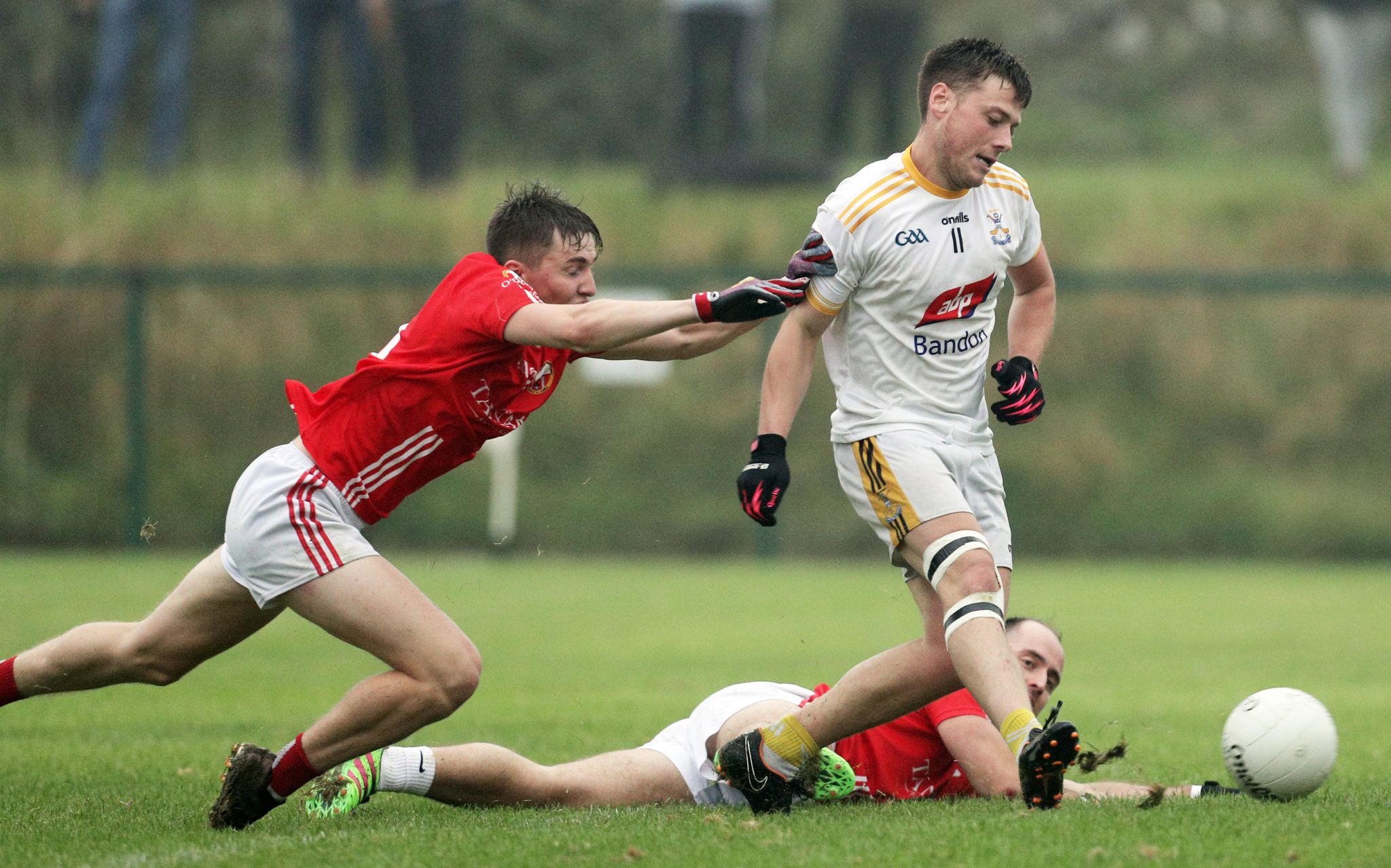 Bandon's Matthew McNamara breaks past O'Donovan Rossa's Shane O'Driscoll and Eoin O'Donovan to score his side's first goal in the Cork SAFC round one game at Ballinascarthy last month. The game finished level, 2-10 to 1-13.

O’Donovan Rossa could rue letting a three-point lead slip with time up in their opening round game against Bandon. They had the two points in the bag only for conceding an injury-time Michael Cahalane goal. Lady Luck again turned its back on them in round two when key forward Kevin Davis picked up a serious injury after 20 minutes and wing back Eoin O’Donovan received a straight red. It’s very unlikely that Davis will feature in Skibb’s final group game on October 17th where they need a victory to put them in with a chance of progressing. Ballingeary are a battle-hardened outfit having been competing in Division 1 of the county league for the last few seasons so any win will be hard earned. The Muskerry men need a result, too, so there’s a lot on the line for both. When they met in the group stage last season, Skibb won a battle.

So, as it stands, in the Senior A championship, Bantry Blues are out of the running for the knock-out stages and will probably face a relegation play-off for the second successive year, having condemned St Nick’s to the grade lower last year. The relegation final will be a straight play-off between the two lowest ranked teams (in terms of points won and scoring difference) amongst the three bottom-placed teams from the groups. Currently, Bantry have no points in Group C while both Kiskeam and Bishopstown have no points in Group B. Knocknagree, St Michael’s and Mallow are already through to the quarter-finals and also have a chance of securing semi-final berths as best group winners with victories in their final games. Everybody else has something to play for but all West Cork eyes will be watching to see how things pan out in the scuffle for progression in Group A.