Castlehaven's Andrew Whelton is challenged by Clonakilty's Joe Grimes during the Bon Secours Cork PSFC round one at Rosscarbery. (Photo: Paddy Feen)

ON the weekend when David Clifford finally turned from Prince to King, ending an eight-year wait for an All-Ireland crown for the Kerry faithful, the Cork club football championships exploded into action.

The standout tie of the weekend was the clash of the last two beaten finalists, Clonakilty and Castlehaven, in the Bons Secours Premier Senior football championship in front of a huge audience at Rosscarbery.

I expected fireworks galore and a rip-roaring contest but after being spoiled with entertainment in the Kerry v Galway classic earlier that afternoon, this one never really got going. It was a cagey, low-scoring affair until the last ten minutes when Clon sensed that the game was going away from them.

I fancied Castlehaven to come through this one based on their superior fire power and so it materialised, as the Hurley brothers, Brian and Michael, kicked eight of their ten points to get their team over the line by two, 0-10 to 1-5.

As is becoming the norm, both teams set up with numbers behind the ball. Gearoid Barry assumed his usual sweeping role for Clon. Maurice Shanley picked up Michael Hurley with Thomas Clancy going shoulder to shoulder with Brian Hurley. To counter Clon’s defensive system that served them so well in last season’s championship run to the county final, the two Haven attackers took up wide positions, leaving Barry with the decision to make on which Hurley to cover.

After a slow start Castlehaven scored six on the bounce to take them in 0-7 to 0-2 ahead with Clon’s first-half play lacking aggression and purpose and, most of all, a focal point in attack. The game looked over.

Then Sean McEvoy struck an early second-half goal but Clonakilty failed to build on it, getting turned over time and again by aggressive Castlehaven defending.

In saying that, there was a big penalty shout when Clonakilty goalkeeper Mark White was taken down in the square on one of his forays forward. Also, a late highball was flicked on by Clon midfielder Joe Grimes only to hit off Haven shot-stopper Anthony Seymour and go out for a 45.

Castlehaven boss James McCarthy will be happy to win but unhappy with his team’s performance. They will have plenty to work on prior to their joust with Nemo Rangers in Round 2 on Saturday evening, August 13th in Clonakilty, which will probably decide who tops the table in Group C.

Nemo got away from Newcestown early in the other game in this group and won 2-10 to 1-5, but they will be eyeing their Clonakilty clash on Sunday, August 14th in Bandon as a huge opportunity to get their season back on track.

Meanwhile, in Group A of the Premier senior football championship two goals from the O’Rourkes, John and Peadar, did the trick for Carbery Rangers in a four-point victory (2-10 to 1-9) over Carrigaline that wasn’t really a reflection of the Rosscarbery men’s dominance.

A goal and a point late on for the Carrigdhoun team put more of a gloss on what was a very poor performance by them. Ross scored 2-10 but kicked 13 wides and three more dropped short. Ten of these came in the first 20 minutes yet they went in at half time 1-5 to 0-4 up.

Jack Kevane, Alan Jennings and the O’Rourkes were the pick of the bunch. Minus Mark Hodnett and with James Fitzpatrick and John Hayes only playing cameo roles on this occasion, manager Declan Hayes will have been very happy to get off the mark with a win. 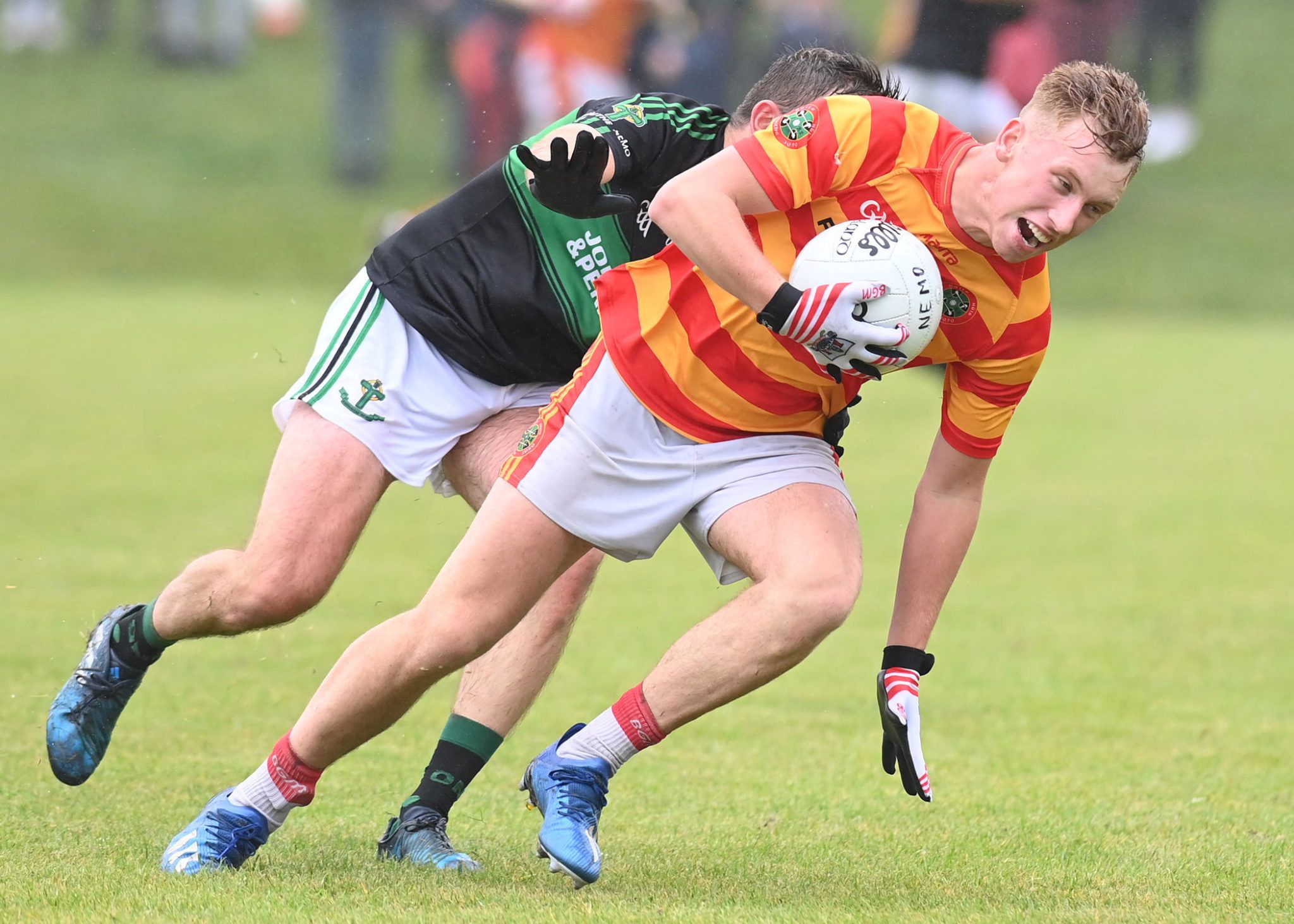 Newcestown’s Seamus O’Sullivan slips away from this Nemo Rangers challenge.

The Barrs looked every inch of the champions that they are in their facile Friday evening victory (1-12 to 0-9) over an Éire Óg side that seemed to be carrying momentum following a very promising opening season at this level.

Despite not having the injured Steven Sherlock, the holders still carried too much firepower. Newcomers Ethan Twomey and Ben O’Connor fitted in seamlessly and Brian Hayes gave ex-Kerry full back Mark Griffin all kinds of trouble at the edge of the square. Eire Óg were too passive and slow in their play. After Ian Maguire barrelled down the middle and finished to the net midway through the first half, the Barrs showed their patience and maturity to dictate the rest of this clash. The tie between Eire Óg and Carbery Rangers – on Sunday, August 14th in Bandon, at 4pm – is a huge game, as it will most likely decide who finishes second in Group A, behind the Barrs.

In Group B, Valleys took their chance with a one-point victory (0-10 to 1-6) over a Douglas outfit that was minus the services of Sean Powter, Kevin Flahive, Brian Hartnett and Nathan Walsh. Three unanswered points at the death gave them victory at Ballygarvan. Valleys are a team full of heart and they never give in. They can now look forward to a clash with Mallow who sprung the biggest surprise of the round with a 0-10 to 0-6 victory over Ballincollig. Being newcomers to the grade and having had atrocious league form this year I had tipped them to struggle to stay in the grade this year. But that is the beauty of sport.

These three groups will really take shape after what will be a hugely-anticipated round two in mid-August. With the likes of Eire Óg, Douglas, Ballincollig, Clonakilty and Newcestown behind the eight ball already, it’s already hotting up.