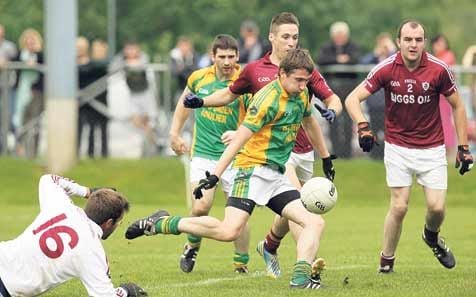 THIS is also Kilmacabea’s third week in a row in football action, having had to wait fifteen weeks after beating Argideen Rangers in the first round by 0-16 to 0-4. They passed the big test in the third round when beating Tadhg Mac Cárthaigh by a point, 1-9 to 1-8.

Last weekend they met Muintir Bháire in the quarter-final and goals by Ger O’Donovan and Sam O’Driscoll gave them a hard-earned 2-10 to 1-9 victory. The Kilmacs have good defenders in Niall Hayes, Niall McCarthy, Sam O’Driscoll and Donie O’Donovan, hard-working midfielders in the Collins brothers, Martin and Joe, and scoring forwards in Ger O’Donovan and Richie O’Sullivan.

Clive Sweetnam is another to keep an eye on.St Mary’s are the reigning champions, but were surprised by Castlehaven in the first round. They got back on track in the second round, struggling over Bantry by 1-11 to 0-5. They gave a true indication of their potential in the fourth round when beating Ilen by 0-18 to 1-2, but again were not at their best when squeezing past Clann na nGael in the quarter final, 1-10 to 0-9. Their team is full of fine footballers, including defenders Stephen Cronin, Stephen Keohane, Rory O’Connor, and forwards Jason Collins, Brian Murphy and Niall Kelleher. The backbone of the side is provided by the three Daly brothers, John, Peter and Chris.

Prediction – The Kilmacs are on a good roll right now and have momentum. Mary’s have only clicked into gear once this season. Motivation seems to be their main problem, but they should have too much experience and power for the battling Kilmacs.