Great memories: Pictured at the closing dinner for the 2015 Wilson Trophy in the UK were, from left, Maddie O'Connell, Billy Clarke, Sonia Minihane, Aidan McLaverty, Eimear O' Leary, their host for the Wilson Trophy and Cian O' Regan. 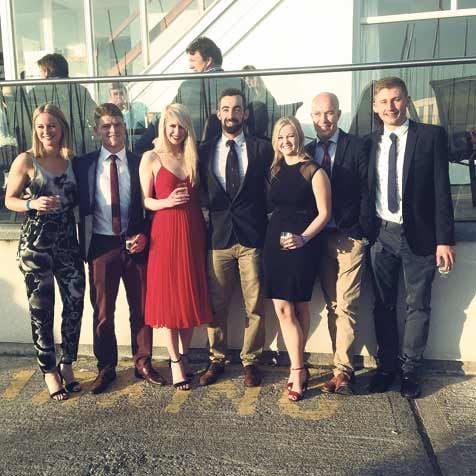 Great memories: Pictured at the closing dinner for the 2015 Wilson Trophy in the UK were, from left, Maddie O’Connell, Billy Clarke, Sonia Minihane, Aidan McLaverty, Eimear O’ Leary, their host for the Wilson Trophy and Cian O’ Regan.

Twelve Cork sailors, including 10 from West Cork, will represent Ireland at the world championships after they were selected for representation following Irish Team Racing Association trials in February.

Speaking to The Southern Star, Sonia Minihane outlined that with the talent, skill and experience that these two Cork crews possess, they have set their sights on being involved in the business end of these world championships, which will be held from July 20th to 24th.

‘We would definitely be hoping to make the finals,’ Sonia said.

‘What happens over there is that there will be three or four days of racing against the different nations so you have a couple of rounds of racing everyone.

‘Based on your percentage wins you go through to the quarter-finals. It’s the top eight teams that go through, so we are targeting that. It’s anyone’s game from there once it gets to the knock-out stages, but we are confident we will be in contention right to the very end.’

No stranger to the big sailing occasions and with an impressive medal haul from various world championship disciplines over the years, it’s easy to see why Sonia and her Cork crewmates are aiming high in England next month, when they will battle with the best crews in the world, such as Great Britain, USA and Australia.

‘For most of us this will be our second team racing world championships,’ Sonia said.

‘Most of the people on the teams would have been to world championships in different classes as well. A lot of people have had podium finishes at these world events so there is a lot of experience in the teams, and a lot of very impressive accomplishments.’

To the outsider looking in, Sonia explains what exactly is involved in this sailing discipline.

‘Team racing is a discipline which pits six boats (three per team) against each other in a test of skill, speed and tactics to cross the finish line in a winning combination. The teams are scored by place of one to six when crossing the finish. If the addition of the three scores of the team is under 10 then you are in a winning combination,’ said Sonia, who’s from Riverdale, Skibbereen.

‘It is a fast-paced type of sailing which is dependent on excellent boat handling skills and rapid tactical decision making.’

It’s frantic and frenetic, at grand-prix speeds, as these sailors call on their skill to caress their boats around the course, and these world championships are also the culmination of dreams for these sailors, who have trained for years to reach this level and a chance to become a world champion.

Sonia – daughter of Terry and Maureen – began her sailing adventure in her teens, following in the footsteps of her older brother Gavin, who she credits with planting the seeds of interest in her mind.

‘I was always on water as a child but I only got into sailing at a later age,’ said Sonia, who works for the Bank of Ireland in Dublin.

‘When I was 15 I moved to Schull Community College, and that’s where I got involved in sailing. David Harte would be extremely involved in team racing and would be known around the country as a top coach – a lot of us were taught by him and we were on the schools’ team racing circuit. We kept it going through college and after that.’

Former UCC student Sonia has also enjoyed her fair share of good times in the last few years, and among the many highlights include 2012 and 2013 UCC Alumni Regatta champion, first Silver Fleet in 2013 UK Team Racing National Championships, 2012 Irish University Sailing Association Eastern champion, and she was also a silver medallist at the 2014 European 2k Rome Invitational.

A cousin to Revelin Minihane, who was part of Team Oracle USA who won the Americas Cup in 2013, sailing is in the family, and so is success – a winning combination ahead of the team racing world championships in July.