TAKE OFF: Shane Howard (Bandon AC) on his way to winning the men's long jump at the 2020 Irish Life Health National Senior Championships in Santry, Dublin.

The reigning Ireland long jump champion is hell bent on running faster and then jumping longer than ever before.

He wants to break the magical eight-metre barrier, but has a distance to cover to get there. Howard’s current outdoor PB is 7.61m set in June 2019, but it’s waiting to be broken. And ahead of the national senior championships later this month, the signs are encouraging for the Bandon AC star.

‘Everything in training is tracked,’ he explains, ‘and my jumps are up, my speed is up, so it’s pushing in the right direction.

‘It’s definitely there, I just need that one lucky day to get it. Sometimes that’s all it is when it comes to field events, to get that one good jump or that one good throw.’

Howard was confident he would smash his PB last year, but then the pandemic struck, turned the year upside down and when competitions returned last August his form was tailing off. He wants to reach that eight-metre mark, and if he does doors will open.

‘The national championships are the big one, but for me the main goal this year is definitely to break my PB and keep stepping up and pushing on for next year,’ the 26-year-old explains.

‘The big championships this year are the Olympics but that’s out of my reach but looking to next year there are the European senior championships. If the qualifying standard stays the same, it’s 7.95m so I need to push to get there and to get to that eight-metre mark – that’s the gold standard for any long jumper.

Right now, ahead of the national championships, defending long jump champion Howard feels everything is moving in the right direction. He jumped a season’s best of 7.42m at the recent Belfast Irish Milers Meet before he jumped even longer, 7.49m, at the AAI Games in Dublin last weekend. 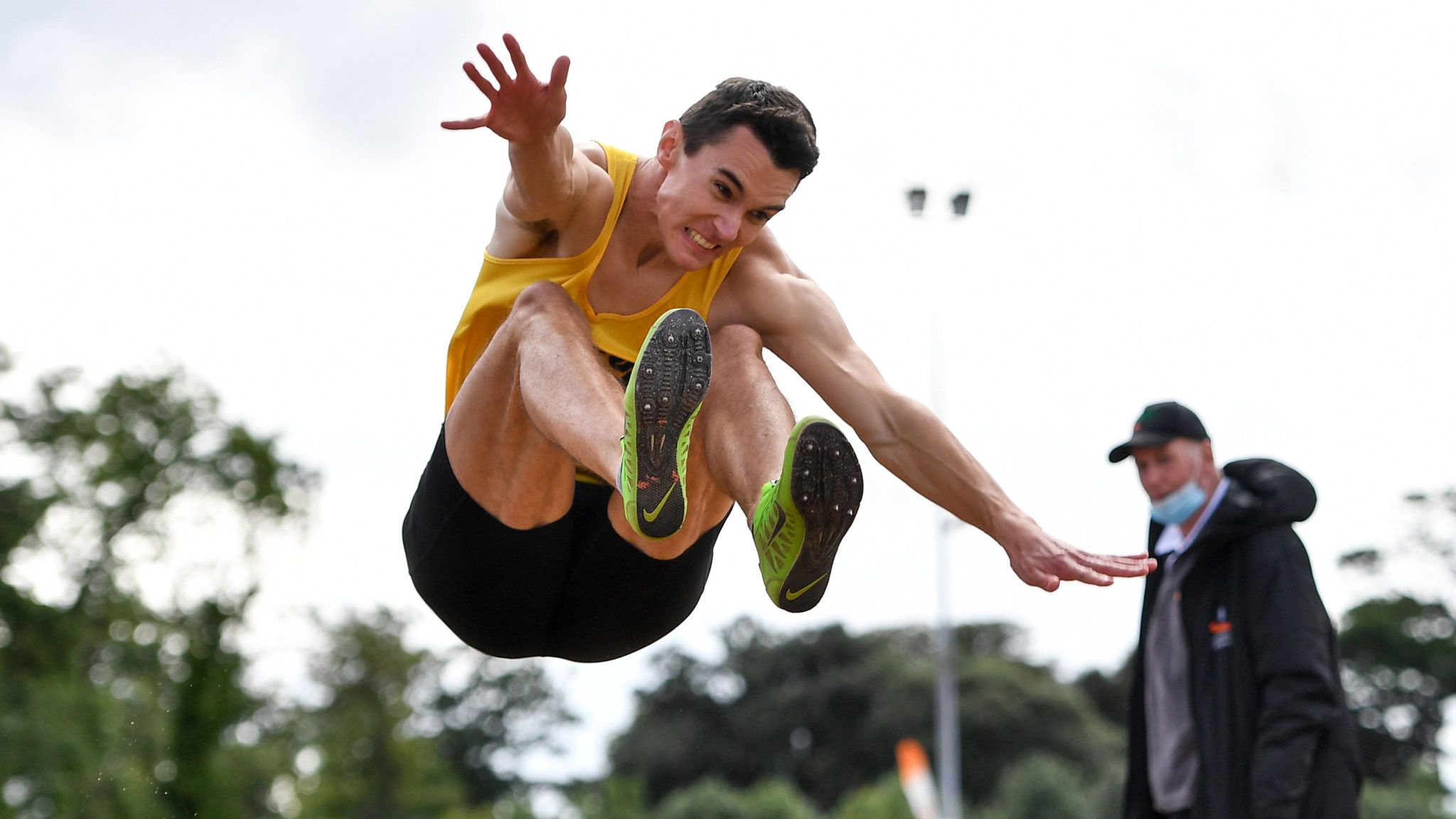 FLYING WITHOUT WINGS: Shane Howard soars through the air.

There are a lot of pieces to the long jump jigsaw – the run up, the take off, the flight and the landing – and they are falling in place for Howard.

‘Speed is a big aspect to it. You have to have speed, otherwise you are going nowhere,’ the Rathcormac man explains, and he can cover the ground quickly as his 100m PB of 10.88 proves. In the run up, Howard needs to get as close as he can to his maximum controllable speed.  It’s similar, he explains, to the start of a sprint race, that acceleration into the running before running taller close to the take-off board.

The take off is key, Howard stresses. This is where it gets technical, too, and he enjoys this aspect of the long jump. Working as a senior project engineer at Stryker in Cork city, he likes problem solving – and it’s a talent he also puts to good use outside of office hours. He had to. In late 2019, because of osteoarthritis in his left foot – his jumping foot – he changed his jumping foot to his right. For a long jumper, that’s a big deal. But he took it in his stride and found a new rhythm to ensure he hits the take-off board exactly where he needs to, to convert his horizontal speed to a vertical lift.

‘The technical side attracted me to the long jump. There is a lot of work that we do in the winter, in and around take-offs and technique. That’s a big part of it for me, I enjoy that, and constantly improving that and getting better,’ he says, before explaining the importance of the take off.

‘Your take off is going to dictate everything in your jump,’ he stresses.

‘There is not a whole pile you can do in the air that is incorrect. If you get a good take off you are just going to travel through the air. The take off is crucial to use that speed that you are coming in with, to get into the air and get that distance.’

Being blessed with a natural spring helps Howard at the take off. The flight stage is directly linked to the first two parts, run up and take off. Get those right, and a long jumper will soar through the air, before the landing. Hands over his head, Howard’s heels are first to hit the sand and then he needs to move his body around that mark.

‘Generally, it happens so fast, you are just in autopilot,’ he says.

‘I can only think of one thing in my jump, otherwise it’s too much to get right for competition.’

In recent years, Howard has got it right on the big stage. He won his first senior national title in early 2019 when leaping to Irish indoor glory. Howard followed up with his first senior outdoor title that summer to become the undisputed Irish king of the long jump. Last year he defended his outdoor national title, so he’s going for a hat-trick later this month.

He’s hoping for nice, warm weather at the national championships at the Morton Stadium in Santry. A light breeze would help too, he smiles, but once it doesn’t go over two metres per second. With the right conditions, Howard’s confident he can break his PB and keep moving onwards, upwards and flying high.