Cork forward Eimear Scally is wary of the Meath challenge this weekend.

The Royals stand between Cork and a place in another All-Ireland decider. The two teams know one another well having already met in the group stages in Birr last June. By their own admission, Cork were glad to emerge two-point winners on that occasion.

A similarly tough test awaits in this Sunday’s semi-final. Make no mistake, the 2020 All-Ireland intermediate champions are a serious threat. Manager Eamonn Murray has Meath flying as evidenced by the Leinster side’s 3-15 to 1-14 defeat of a battle-hardened Armagh in the last eight.

Cork forward Scally certainly knows the challenge Meath are going to pose in what should be another hard-hitting encounter.

‘We knew what to expect when we first played Meath (earlier) this year. They were strong and fit. I don’t know what Eamonn Murray is feeding them in Meath but, by God, they just keep going for the entire 70 minutes!

‘We have played them and know what they are like. We ground out the win the last day. That was the most important thing. Cork knows a lot more about Meath this time around, as do they about us.

'I’m sure it will be a humdinger. We are playing one of the best teams in the country. Anyone you meet in the top four is going to be good so everyone is looking forward to the challenge.'

Scally returned to the Cork senior panel in May of this year following a lengthy sabbatical. By her own admission, the Éire Óg forward was no longer enjoying her football when she decided to take a step back in 2020. Now, delighted to be in again with Ephie Fitzgerald’s set-up, regaining match sharpness proved as tough as expected.

‘Yeah, it was definitely tough,’ the Éire Óg player admitted.

‘I suppose I hadn’t really played any football since March 2020. I was also injured so decided to take some time out. That was definitely the best decision for me as I wasn’t enjoying my football.

‘What came back to me was the fact we are always telling young kids that football needs to be fun whenever we coach them. For me, at that time, it wasn’t fun anymore. Now, I am thoroughly enjoying it. It was just a matter of taking a break really.

‘Thankfully, I kept relatively fit by doing a bit of gym work and going for runs. I knew I was always going to return to playing football and didn’t want to start from having absolutely nothing done.’

One appearance against Westmeath in 2020 preceded her return to the Cork senior panel in May 2021. Scally came off the bench as a late substitute in Cork’s 2-11 to 2-8 Division 1B group victory over Waterford in early June.

Following that, the Éire Óg stalwart scored a point, having again come off the bench to help Cork see off Donegal in the national league semi-finals. Another sub appearance and another 0-1 couldn’t prevent Scally or her teammates from falling to Dublin in the league decider.

But it has been during Cork’s All-Ireland campaign that a fully-fit Scally began to make her mark.

A starting place and 0-2 in the All-Ireland group victory over Meath was followed by Scally’s most impressive showing to date. Away to Tipperary, Scally kicked 2-5 (including a penalty) as Cork trounced their Munster rivals.

Stepping into Cork’s free-taking role in the absence of injured Orla Finn, Scally steadied her county’s nerves with four points in the All-Ireland quarter-final defeat of Waterford.

‘Naturally, I was a bit worried about my match-sharpness when I re-joined the Cork senior panel,’ she said.

‘A couple of tough sessions over a five-week period definitely helped me and I’m benefitting from all those sessions and feel a lot more comfortable now.

‘As for taking over the frees, I would have always been taking them for UL and Éire Óg up through the ranks so am used to it. Myself and Orla Finn are always out for half an hour before every Cork training session practicing our frees as well. Unfortunately, Orla picked up an injury but hopefully, will be back as soon as possible.

‘It is a confidence boost to convert a free or two just to get yourself into the game. There are plenty of girls in the Cork team who can kick a ball over the bar but I don’t mind taking on the extra responsibility.’ 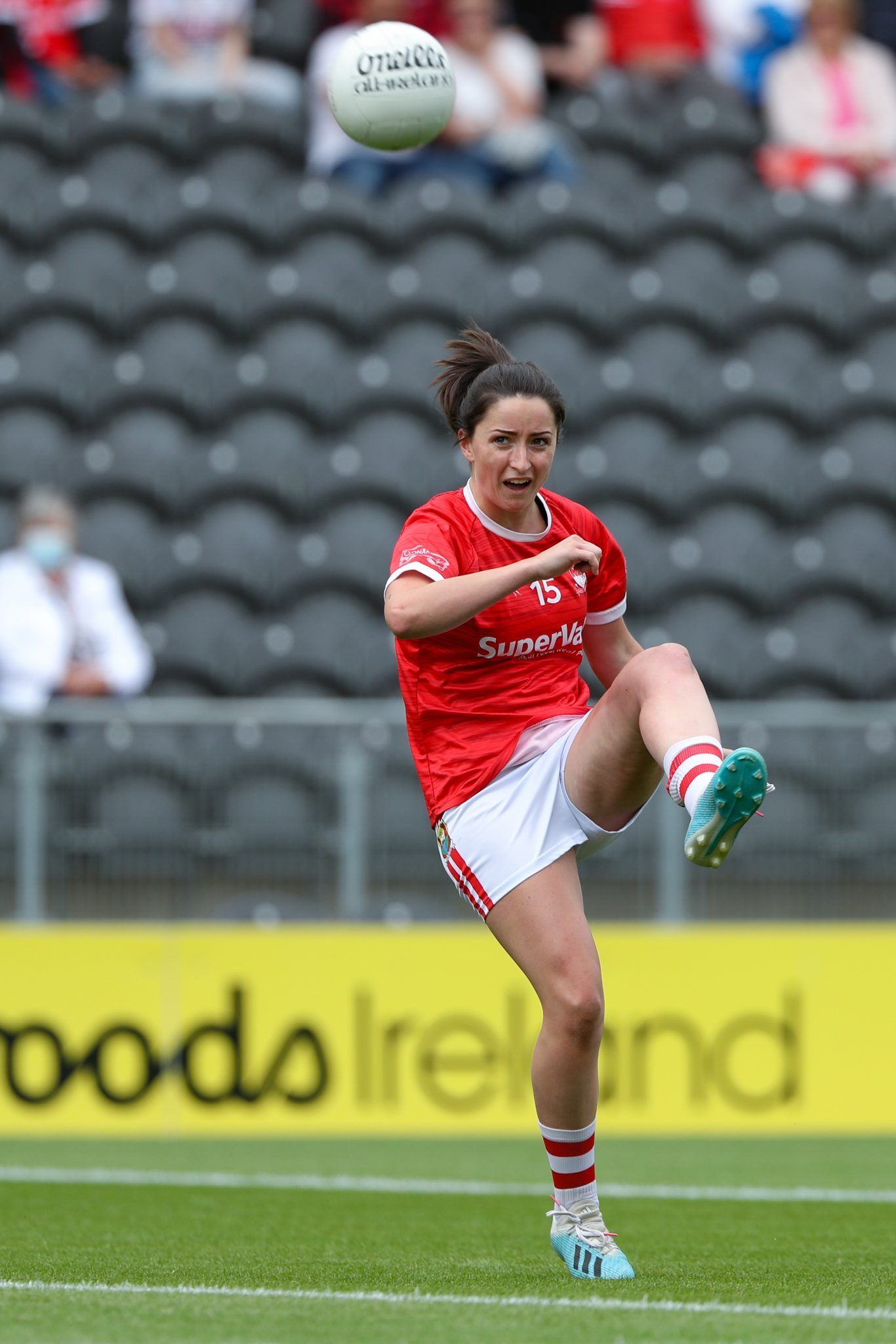 Eimear Scally has impressed since she returned to the Cork panel in May.

Although still only 24-years-old, Scally has been on the inter-county football since she was 17. As she surveys the 2021 Cork senior panel, Scally is one of the county’s most experienced campaigners despite her young age.

‘I would almost call myself one of the older ones on the panel in a sense as I’ve been there for a while now,’ Scally laughed.

‘I definitely don’t feel like I have to lead or anything like that with our younger players. If you are on the Cork senior panel then you are already good enough to be there.

‘The likes of Sadhbh O’Leary and Katie Quirke don’t need to be told what to do. One of the great things about the current Cork panel is that the (younger) players are always asking for ways to improve. Everyone is able to give each other constructive feedback.

‘I’m fortunate to know John Cleary for a long time and having grown up in the same Éire Óg club. John spent a couple of years with the Cork minors and has brought through a number of girls, helping them transition on to the senior panel. That’s why a lot of the girls that have come through have done so in a professional and mature manner.’

Meath are ready to test Cork’s All-Ireland credentials for the second time this year. But fully-fit, reenergised and enjoying her football once again, Scally is primed to help her county progress to another All-Ireland final.