The Castlehaven team celebrates after defeating Dohenys in the 2021 Cork JAFC final.

CASTLEHAVEN needed sudden death in a 30-metre free shootout to see off Dohenys in the most dramatic Cork LGFA junior A county final at MTU last weekend.

We have to go right to the end of an emotional rollercoaster of an afternoon to explain the most action-packed and controversial Cork LGFA county final for many years.

A West Cork derby between the two best clubs in this year’s junior A grade lived up to its billing in front of a huge attendance last Saturday. Castlehaven battled back to force a draw at the end of regulation time, 1-8 to 1-8, and then extra-time, 1-12 to 1-12.

That meant a 30-metre free shootout was needed to decide the outcome. A replay wasn’t a possibility – even though Castlehaven sportingly floated the idea of playing again before sudden death – as the Munster junior A championship begins this weekend and a Cork representative is needed.

The Castlehaven team celebrates their victory over Dohenys in the epic Cork ladies' junior B football final at MTU.

The drama from the previous 80 minutes continued in the shootout as two tired sets of player struggled to find the target. Mairead Crowley (Dohenys) and Rachel Whelton (Castlehaven) were the only successful kickers before sudden death was required.

Dohenys’ ninth kicker, Ruth Collins, stepped forward and split the posts to seemingly win the county. Dohenys’ wild celebrations were immediately cut short however, as one of the referee’s linesmen deemed Collins to have crossed the ‘kicking line’ which, under LGFA rules, chalked off the score.

Then Haven full-back Aideen Santry aimed high and sent her effort over the bar. Dohenys missed their final kick and it was Castlehaven’s turn to celebrate. An awful way to end an afternoon filled with marvellous football.

‘It is very hard on the team that loses in a situation like this,’ Castlehaven manager Dinny Cahalane told The Southern Star.

‘Every time we came back to level it, they went a point ahead. That was the whole game through. You have to give it to the girls and the effort they have put in. We brought a few young girls in at the start of the year and they drove the older girls all. They have all been brilliant, outstanding.’

Castlehaven won on a day they kicked 15 wides and trailed their opponents most of the afternoon. The eventual winners never gave up and fought back brilliantly to force extra-time and then 30-metre frees. That never-say-die spirit served the Haven well in winning county junior B and C titles over the past three years. It surfaced again in MTU last Saturday. It had to. Your heart goes out to a Dohenys team that thought they had the county final won in the shootout only to have Ruth Collins’ effort ruled out for an infringement. The Dunmanway club played their hearts out the entire 80 plus minutes but also went scoreless for 20 minutes of the first half when they had an extra player due to a sin-binning. Dohenys also had three late chances, two saved by Castlehaven goalkeeper Emma O’Callaghan and another Katelyn Sheehan effort that drifted wide. An absolutely heart-breaking loss, yes, but Dohenys had their chances to win it.

The Dohenys team that was defeated by Castlehaven in the Cork ladies' junior B football final at MTU.

Cork star Melissa Duggan was the best player on the pitch and scored 1-3 from midfield. The All-Star nominee couldn’t have done any more for her club. Duggan was ably assisted by full-back Claire Hurley, Katelyn Sheehan, Ruth Collins and Mairead Crowley.

Dohenys showed no signs of early nerves and led by three points when a Sarah O’Donovan goal helped Castlehaven move in front 1-2 to 0-3. A cracking final saw Jessica McCarthy sin-binned but Dohenys failed to take advantage. That was until Melissa Duggan netted a sublime goal on the stroke of half time to send her team in 1-4 to 1-2 up at the break.

A brilliant third quarter saw a rejuvenated Castlehaven reduce the deficit, 1-7 to 1-6, thanks to two Grainne O’Sullivan and substitute Hannah Sheehy points.

Tiring limbs made for a much cagier final quarter in which Katelyn Sheehan (free) and two Katie Cronin frees saw the sides draw level. Melissa Duggan had an injury-time a goal-bound shot tipped away by Emma O’Callaghan and it ended 1-8 apiece.

There were more players going down with cramp than scores during two hard-hitting periods of extra-time. Two Grainne O’Sullivan points were answered by Michelle Murphy and a Katelyn Sheehan brace. O’Sullivan struck again to make it 1-11 to 1-11 before Katelyn Sheehan’s speculative effort rattled the Castlehaven crossbar. Sinead O’Connell edged Dohenys in front before Mairead O’Driscoll landed a free amid a welter of excitement to make it 1-12 apiece. The county final finished in a draw but the drama continued in the subsequent 30-metre free shootout. 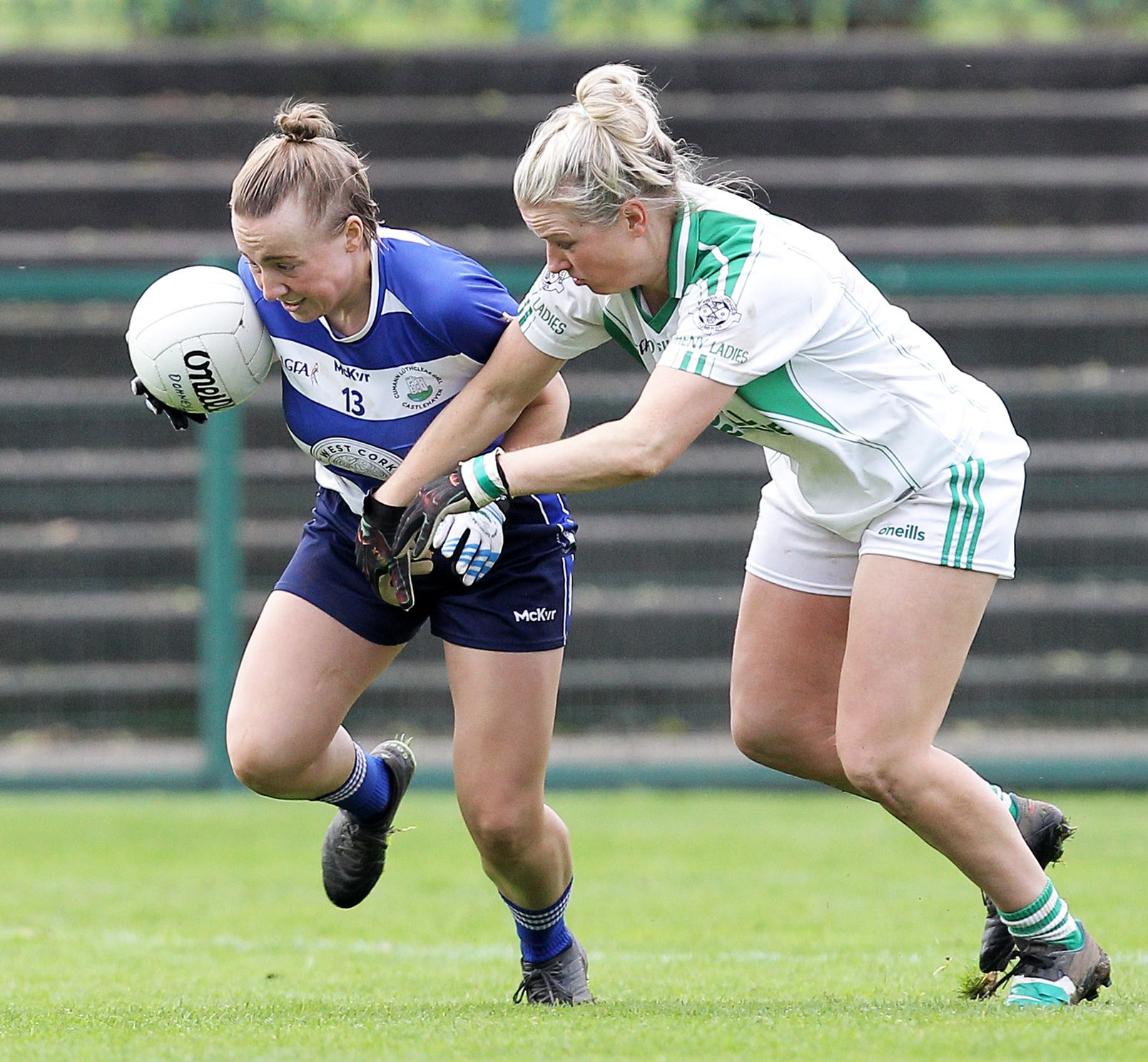 ‘Look, I suppose if we were beaten today especially in the circumstances it would have an awful bitter pill,’ Dinny Cahalane concluded.

‘We will have to regroup next year and go at it again. We are an intermediate club next year. We are looking forward to this year’s Munster club championship and represent Cork the best way we can.

‘We are not finished yet. I said at the start of the year when we went up junior A that we were not there to make up the numbers. We have won it and will drive on from here.’