Reaction: Cork manager Eamonn Ryan has demanded a reaction from his side to their last league game, a defeat to Dublin. 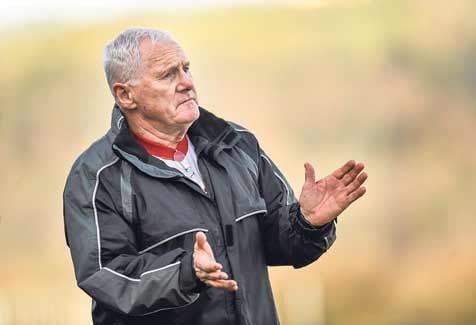 Reaction: Cork manager Eamonn Ryan has demanded a reaction from his side to their last league game, a defeat to Dublin.

CORK ladies’ football manager Eamonn Ryan wants to see a reaction from his team to their last league game – a heavy defeat to Dublin – when the Rebels take on rivals Kerry in a Tesco NFL semi-final this Sunday in Dromcollogher/Broadford, at 2pm.

A much-changed Cork lost at home to Dublin, 5-13 to 2-7, and it was the performance that disappointed Ryan, as the All-Ireland and league champions just never turned up.

Sunday, against Kerry, in this league semi-final is the perfect opportunity to get back on the right track, insists Ryan.

‘We didn’t play well in our last game against Dublin so we need to turn in a better performance and see where we are,’ the Cork ladies’ manager said.

‘It was a changed team but we still didn’t perform and we were disappointed with the performance. This weekend will tell us if we have the mind for it and the hunger for it.’

When Cork and Kerry met in the league earlier in the year, Ryan’s side just edged it by a single point, 1-13 to 1-12, and he expects little between the teams again this Sunday.

‘For the last few years we have had some great battles with Kerry and I am sure that Sunday will be no different. There has been little between the teams,’ Ryan said.

That narrow win over Kerry in February saw the good and bad of Cork in the league, and while there have been wins against Mayo, Galway, Tyrone and Laois, as well as a loss to Monaghan, Ryan admits that Cork aren’t playing as well as thay can, not yet anyway.

‘We have been up and down in the league. Without playing great we probably have more points than we deserve. We deserved to qualify but we were lucky against Galway and Kerry, while we were unlucky against Monaghan,’ Ryan said.

‘We have brought some new players on board but only time will tell whether they can make the step up.

‘We are losing some of our older stalwarts. It’s a question of giving as much game time as you can to the new players. It can be hard on the new players when they come in because they can be in awe of some of the players who have been there for years.’

Ryan also revealed that he hasn’t received any indication yet whether nine-time All-Ireland winner Nollaig Cleary will rejoin the panel this year. Over the last couple of seasons she has bided her time before making a decision to come back, and this year is no different for the experienced and highly-decorated Castlehaven woman.

‘We have no news on Nollaig. We are hoping to hear something from her in the next week or so, on what her plans are,’ Ryan said.

‘We will just wait and see. Players like Nolliag owe us nothing. They have been very loyal and very faithful and they deserve as much time as they need to make their own decisions.

‘Angela Walsh has taken a year our. She will be a huge loss. It’s inevitable that players want a break and that there will be changes. We are on the road ten years now.’