FOLLOWING on from the recent reflection on how the West Cork Rally came to Clonakilty, we look at aspects of the inaugural event in 1977 that attracted 80 entries, had 68 starters and 28 finishers.

From a West Cork aspect, there were just three local drivers involved. Drimoleague native Frank O’Mahony in a 1340cc Mini Cooper ‘S’ and co-driven by Bryan Curtin was seeded at No. 21. Rosscarbery’s John Levis, who sadly passed away recently, campaigned a Vauxhall Magnum while the late Clonakilty driver Paddy Joe Lowney drove a Triumph Stag on the 19-stage event.

Meanwhile, Innishannon’s Sam Hawkins (Ford Escort) and his brother-in-law Richard Rohu (Mini Cooper ‘S’) also competed, but it seems that the West Cork geographical border – that was often the subject of great debate down the years – had a cut-off point at Bandon. Hawkins, who was co-driven by his long-time friend Sean Hanley (Ford Escort), finished tenth overall.

The Levis family had a great association with motorsport, the West Cork Rally and the Munster Motor Cycle and Car Club (MMC & CC). John was pre-deceased by his sister, Carol, who was a very prominent member of the MMC & CC and was the very efficient secretary for the club’s flagship event, the Cork ‘20’ International Rally, for several years. The 1976 Cork ‘20’ featured stages around West Cork including Kilbrittain, Butlerstown, Ardfield, Rossmore and Clogagh.

It's hard to credit that there were just three West Cork drivers in that first West Cork in 1977. Suffice to say that was the beginning of a special era where the honour of finishing the best local is always viewed as a serious accolade. John Levis’ family, apart from running Rossa House, also ran a garage business and were the main Vauxhall dealers in West Cork.

John, navigated by Carrigaline’s Kieran Jolly and seeded at No. 76, moved up to 53rd after the opening stage around Ardfield and ended the day in 37th spot. Climbing five spots on Sunday’s opening stage at Ring, they went on to finish 26th overall – with John winning the ‘Best West Cork Driver’ award. He also competed in the West Cork in 1988 where he was seeded at 110 but failed to finish.

In 1979, he had a change of car and co-driver, as the Magnum was replaced by a Vauxhall Chevette with Rosscarbery’s John O’Mahony as his navigator. Seeded at 96, they didn’t finish.

Although John’s rallying exploits only spanned about four years, he remained involved and very interested in rallying. In the early 1980s and with the Vauxhall dealership, the Levis name was associated with the likes of Jimmy McRae and the late Russell Brookes, who won the West Cork in 1982. Although seven-time Circuit of Ireland winner and five-time British Rally champion McRae never won the Clonakilty-based event, he was always a huge attraction. Both Brookes and McCrae benefitted from the financial support through the Levis’ Vauxhall dealership.

While the rally was based in Clonakilty, places like Rosscarbery and Courtmacsherry were hugely popular hubs and the Rosscarbery aspect was built around the support of the Levis family. Aside from competing in the West Cork, John also drove in the Tipperary Stonethrowers Rally, the Thomond Rally and the popular Banna Beach Rally.

Neither Frank O’Mahony or Paddy Joe Lowney (who was co-driven by the late Vincent Cullinane) finished the West Cork Rally in 1977. O’Mahony went on to become a very popular driver but despite leading the West Cork on several occasions, he never actually won the rally. However, the TP Houlihan Trophy did end up in the O’Mahony household when his son Brian won the rally in 2013. 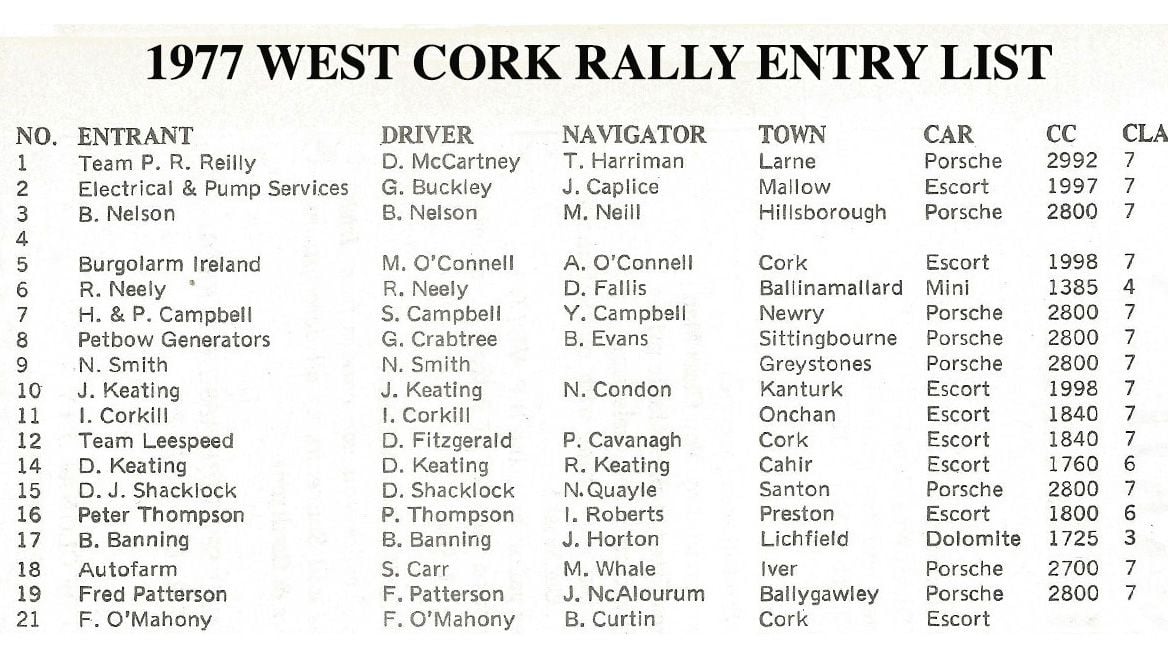 Flicking through the 1977 entry list there are some interesting names. Ronan Morgan, who was co-driver to Sean Murphy at No. 46, went on to become a hugely successful co-driver, winning the Circuit of Ireland with Billy Coleman in 1984; he is a multiple Middle East Championship winning co-driver.

Another co-driver from the 1977 list and another Dubliner, Ronan McNamee (who was navigating Bill Prendergast in a Ford Escort) won the National Aluminium Rally in Skibbereen with Brendan Fagan (Vauxhall Chevette) in 1983 and won the Galway Rally with both Fagan and Austin MacHale.

Elsewhere, the legendary Paddy O’Callaghan, who was co-driven by Bill Keary in an Audi, was seeded at No. 20, and they finished 13th. Both went on to become hugely successful in the motor trade. Paddy’s son, Liam, won the West Cork in 1994 and 1996.

Ballycotton’s Ray Benskin (Ford Escort), who finished 11th, is still competing. Co-driver Hugh McPhillips, who sat with Don Canny, went on to compete with Frank O’Mahony for several years and also (like O’Mahony) became clerk of the course for the Cork ‘20’ Rally, as did another co-driver of the ‘77 event, Alan Verso.

In terms of stages, there were a total of 19 on the itinerary. Saturday’s action began with the 23km Galley Head stage followed by Rossmore (20.50km), Dunmanway (25.30km), Drinagh (17.50km) that was cancelled due to poor communications, Skibbereen (12.40km) and Reenascreena (13.70km). The day’s four remaining stages were repeats of Rossmore, Dunmanway, Drinagh and Reenascreena. The Sunday stages were Ring (13.00km), Clogagh (16.60km), Bandon (18.20km), Enniskeane (11.60km) and Ballinascarthy (12.60km) with repeats at Clogagh, Bandon, Enniskeane and Ballinascarthy.

Coleman set the fastest times on the opening three stages and was also quickest on stages five and six. On SS 7, he and Brian Nelson (Porsche 911) shared the quickest time with Coleman best on SS 8 and 10 and Nelson topping the time sheets on SS 9. On the second day, Coleman was quickest on Ring, Dessie McCartney (Porsche 911) was best through SS 12, Nelson was best on SS 13 before Coleman and Mick O’Connell set equal best time on SS 14. Nelson posted the best time though SS 15, Coleman was quickest though SS 16 & 17, shared SS 18 with O’Connell, who was quickest through the final stage. Coleman finished 2 minutes and 50 seconds ahead of Dessie McCartney (Porsche 911) with Mick O’Connell (Ford Escort) a further 40 seconds further behind in third.

Interestingly, Coleman’s overall time for the event was three hours, ten minutes and 54 seconds. Craig Breen’s winning time in 2019 was one hour, 51 minutes and 18.6 seconds. The respective stage distances were 302.9km and 171km.