A proud moment: Sean O'Donoghue, Inniscarra GAA, photographed with family members as he receives the Muskerry GAA/Auld Triangle Sports Award for March from Michael O'Riordan at the award's function. 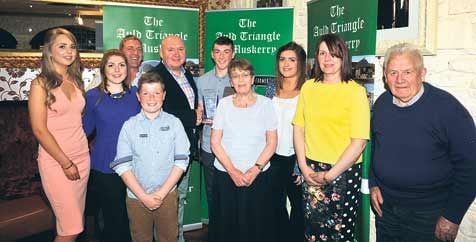 A proud moment: Sean O’Donoghue, Inniscarra GAA, photographed with family members as he receives the Muskerry GAA/Auld Triangle Sports Award for March from Michael O’Riordan at the award’s function.

REIGNING champions Kilmurry showed fine form in defeating Clondrohid in the opening round of this year’s Ross Oil Mid Cork junior A football championship at a very wet and cold Macroom on Friday night.

Clondrohid have had a good league campaign to date this season and were expected to offer a stiff challenge to the champions, but Kilmurry got on top early on, boosted by a sixth minute goal from Pádraig Berhanu. They led by 1-4 to 0-2 after the opening quarter.

Clondrohid did stage a mini-revival and a well-taken goal from Neilus Murphy in the 27th minute left only two points between the teams, but Kilmurry, with points from Berhanu and Dave O’Halloran, finished the half well to lead by 1-7 to 1-3 at the break.

The floodlights had to be switched on for the second half and Kilmurry almost completely dominated the play, Clondrohid only managing to score one further point.

Kilmurry had points from the outstanding Dave McCarthy, William Barrett and O’Halloran to lead by 1-10 to 1-4 after 40 minutes.

In the final quarter they continued to frustrate the Clondrohid scoring efforts while adding two further points before substitute Joe Ryan swooped for a late goal to further embellish the scoreline.

Kilmichael rally in second half

This may have been a first-round game with a second chance for the losers but the two teams went all out for victory and provided the enthusiastic support with a rip-roaring championship match at Carraigadrohid on Monday evening.

Donoughmore led at the break after two goals in a minute from Alan and Darragh O’Shea midway through the half helped them to a 2-5 to 1-5 interval lead. James O’Leary’s second-minute goal had given Kilmichael the ideal start to this contest.

On the restart, Jamie Twomey slammed home a third Donoughmore goal. When Aidan O’Shea added a point there were seven points between the teams, 3-7 to 1-6 and it looked like Donoughmore were heading for victory after 37 minutes.

Donoughmore now lost a defender to a black card offence, James O’Leary pointed the resultant free and Kilmichael began to fire on all cylinders with Peter Kelleher, Finbarr Dromey and James O’Leary driving them on.

Kelleher and Dromey combined to put Alan Murphy through for a smashing goal in the 42nd minute, Daniel Twomey pointed a free and when James O’Leary’s high ball in finished up in the Donoughmore net in the 44th minute, Kilmichael were sensationally back in front.

They drove on from there with points from O’Leary and Conor Cotter. Their cup of joy was full to overflowing when Peter Kelleher brought down a Daniel Twomey free into the Donoughmore goalmouth and Finbarr Dromey slammed a fierce ground shot to the net.

Donoughmore lost a defender to a straight red card as little quarter was being given or sought.

Kilmichael remained in control and could afford to concede a last-second goal to Donoughmore, Aidan O’Shea belting a 14-metre free high under the crossbar despite a crowded goal line.

It took a late goal from Conor Foley followed by a point from Mark O’Leary to give Blarney victory over the Naomh Abán second team at Kilmurry on bank holiday Monday.

In truth, the winners should never have found themselves in the position of needing these scores as they had squandered some really fine opportunities all through the game, particularly in the late stages when they kicked over six awful wides in a row before striking for the winning scores.

The score at the break was 0-7 to 1-2, the Naomh Abán goal from Gerry Lyons keeping the Gaeltacht men in contention.

When Lyons had his second goal shortly after the restart, his side were in front and the Baile Mhuirne men were still a point to the good at the three-quarter stage when they led by 2-5 to 0-10.

Shane McCarthy then pointed a free to open up a two-point gap and a string of Blarney wides followed, with the result that it looked likely that they would lose the game against the run of play.

Salvation was at hand, however, in the 58th minute when Mark O’Leary came forward in attack and gave Conor Foley a glorious chance of a goal and this time there was no mistake.

The slender Blarney lead lasted only a minute as Naomh Abán came down the field and Gerry Lyons fired over an equaliser.

On the call of time, Mark O’Leary saved Blarney blushes with a well-taken point and this was enough to see them through to round three.

Canovee are one of the top teams in the Mid Cork junior A football championship and were expected to be too good for the Cill na Martra second team when they clashed at Clondrohid on bank holiday Monday.

Expectations were realised, as Canovee led from start to finish, and seldom looked in trouble, although that is not to be dismissive of the valiant efforts of the Cill na Martra men.

Points from Mark Verling, James Moynihan and Conor Hughes had Canovee 0-4 to 0-1 in front after the opening quarter, Donal Óg O’Leary getting on the board for the Gaeltacht men.

Further points from the same Canovee trio in the second quarter were answered by a sole point from Sean Furey. Canovee led by 0-8 to 0-2 at the break.

James Moynihan and Mark Healy had points to further increase the Canovee lead on the resumption but then Cill na Martra staged a spirited rally, inspired by the strong play of Mike Desmond and Donal Óg O’Leary – four points from Desmond had the score at 0-10 to 0-6 by the 49th minute.

Canovee needed a score and it was provided by wing back Gearoid Lucey in the 50th minute.

Thereafter Canovee piled on the agony for the losers with a point from Hughes, two from James Moynihan and three from Mark Healy to give Canovee an impressive winning margin.