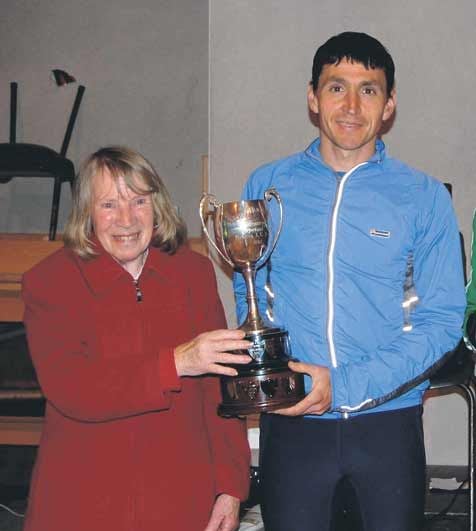 ALAN O’Shea made it two wins in three years as a high-class Midleton road race saw the first four finishers under 25 minutes for the five miles.

Course record holder and winner for the past two years, James McCarthy of the East Cork club, was absent on this occasion but his two team-mates Sean McGrath and Tim O’Donoghue made Bantry man O’Shea work hard for his victory.

The race, now known as the Joe Hourigan Memorial event in honour of the late Midleton marathoner who passed away in 1999, saw over 400 taking part and straight from the gun O’Shea was pushing the pace.

McGrath stayed with him for the first two miles but then the former Cork City Marathon winner opened a gap, going on to win by eight seconds in 24:47, just seven seconds outside McCarthy’s record.

‘It’s a good course with good running if you’re in shape so I was delighted to win and to run my fastest time,’ said O’Shea.

‘I was going to run the London Marathon but I was still returning from an injury so I’ll keep training away during the summer and maybe do an autumn marathon such as Berlin or Amsterdam.’

Sinead O’Connor had set the women’s record of 28:55 last year and although she was 14 seconds outside that time, the Leevale athlete was still pleased with her performance.

Carmel Crowley made the journey from Timoleague worthwhile with a good second place, the Bandon AC athlete recording a time of 30:01 which is her fastest in a while.