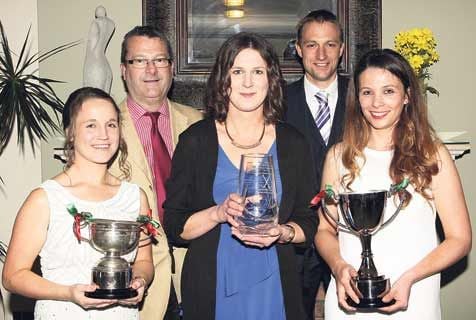 THE many success stories, great games and memorable goals from the season dominated conversations at Clonakilty Hockey Club’s social, in the Fernhill House Hotel, that celebrated another fantastic season for the West Cork women.

The addition of a third adult team was a huge success in the 2014/15 season, attracting a lot of secondary school players and beginners.

The Division 6 team was captained by Lynda O’Donovan and coached by James Moore, a new addition to the club having previously helped the club out with umpiring. It was a challenging season for the Division 6 team, facing some strong opposition with more experienced players on board. They will have learned a lot from this season and will hope to be strong contenders next season in Division 6.

The Division 3 and Division 1 teams started the season with strong numbers. As the season went on, numbers dropped for various reasons. Some players were forced to overlap between the two teams but this did not weaken either team as they progressed through league and cup matches.

One disappointment was the Division 1B girls’ loss to Our Lady’s of Dublin in the first round of the Irish Hockey Trophy. After last year’s Irish Hockey Challenge All-Ireland win the girls had dreams of another day out in Belfield, but it wasn’t to be. This defeat only made them more hungry to win the Munster competitions.

The Division 3 team, captained by Cathy McCarthy and coached by Melvin Beamish, came second in the league, behind Ashton. The girls were determined to get some silverware and achieved that in winning the Division 3 Cup in a very tight final against local rivals Bandon on a scoreline of 1 – 0.

The Division 1B girls were captained by Nicola O’Donovan until Christmas before she left Ireland for her travels in Australia, then captained by Hilary Chapple until she was forced to watch from the sidelines and then by Cliodhna O’Regan. This team was also coached by Melvin Beamish.

They finished second in the Division 1B table and were promoted to the new Division 1 Challenge after the Christmas break.

There were eight teams competing in this new league. Clon were joined by the other four teams from the top five in Division 1B and the bottom three from Division 1A. Clon went on a winning streak in the league until they were forced to settle for a scored 1 – 1 draw with Tipperary.

They beat Clonmel and Waterford in their cup campaign to face Cork Wanderers in the final, who they beat in extra time to win the Division 1B cup.

Meanwhile, a Trish Moloney goal saw Clon win the playoff against Limerick 1 – 0, as they were crowned Division 1 Challenge winners – to add to the Division 1B Cup triumph.

Next season Clonakilty will be hoping to field three teams again, Division 6, Division 3 and Division 1A – the latter will be a massive step up but a challenge the girls will revel in.

The club is looking to recruit new coaches for next season, and also new players, both experienced and beginners. Anyone who may be interested can contact the club via private mail on its Facebook page, Clonakilty Hockey Club.