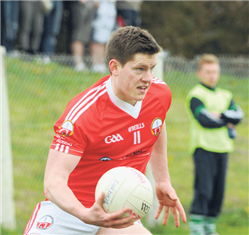 O’DONOVAN Rossa are the first team through to the last four of the Cork SFC after a 2-15 to 1-10 quarter-final win against Bishopstown in Dunmanway on Saturday night.

The Skibbereen side now awaits the winner of the Castlehaven (who beat the Barrs on Saturday night) v Ballincollig quarter-final.

A first-half goal from Thomas Hegarty helped Rossas build up a 1-7 to 0-5 half-time lead, before Bishopstown – who had beaten Rossas in round one earlier this season – levelled the game early in the second half, 1-7 apiece, with Paul Honohan getting the goal.

But credit the Skibb men as just when it looked like Bishopstown were getting on top they answered back, and Rob Long’s goal in the 40th minute gave them a lead (2-8 to 1-8) they never relinquished.

With strong performances from Donal Og Hodnett, Daniel Hazel, Eddie Nealon, Mark Collins, David Shannon (in the last quarter) and Thomas Hegarty (in the first half), Skibb weren’t going to be denied as they pulled away in the end, outscoring Bishopstown 0-7 to 0-1 in the last quarter.