CHRISTMAS came early for Newcestown’s U21 hurlers in the Clona Milk U21A hurling final in Ahiohill on Sunday morning last.

Favourites and defending champions Newcestown, going for three in-a-row, were put to the pin of their collars to beat an Owen Gaels’ outfit that were really psyched up for this clash.

When the Gaels managed to draw level at the end of 60 minutes, having looked down and out in the last quarter, it looked odds-on a draw and extra time but drawing on all their experience and renowned spirit, Newcestown came up with the winning scores in injury time.

‘Owen Gaels brought great intensity to the game, especially in the first half and we were lucky to be down only five points at half time,’ said a relieved Newcestown mentor Finbarr O’Callaghan.

‘If we ever needed a goal, we got it straight after half time, it brought us within striking distance immediately. We had to work very hard, we went up four points in the last quarter but they got a goal and a point to level it again and I thought we were heading for extra time. David Buckley came on there near the end and made a big difference and we managed a couple of winning points.’

The Newcestown team celebrates after defeating Owen Gaels in the Clona Milk U21 A HC final at Ahiohill. (Photo: Paddy Feen)

With the breeze in the first half, it was spirited Owen Gaels who dominated proceedings. The defence, superbly marshalled by Ciarán Nyhan and Padraic Cullinane, were unbending under pressure, midfielders Ciaran O’Neill and Andrew O’Leary were on top. Up front, the Gaels had a real ace in Brian O’Donovan, who rifled over three points in the first quarter, in answer to a single pointed free from Newcestown’s ace marksman, Richard O’Sullivan.

Gaels’ dominance continued into the second quarter. They hit six points, Newcestown replying with three, opening up a gap of five points by half time, 0-9 to 0-4. However, it was noticeable that most of Gaels’ scores were from frees, three from O’Donovan and one from Conal Cullinane, as they struggled to break free of the shackles imposed by a tight-marking Newcestown defence. O’Donovan and Cian Ryan did hit a point each from play. The story was the same at the other end of the pitch, Newcestown depending on O’Sullivan from frees, as he converted two, with only the impressive Eddie Kenneally scoring from play.

One wondered if a five-point lead was enough as the Gaels faced the breeze in the second half. They were dealt a real body-blow in the very first minute when O’Sullivan was fouled near goal and he buried the penalty in the top corner of the net.

It was all Newcestown in the third quarter with Eoghan Collins, Seamus O’Sullivan and Cormac O’Sullivan lording the defence, Conor Goggin and Olan Walsh getting on top at midfield, and O’Sullivan, Kenneally, Niall Kelly and Ciarán O’Donovan causing problems in attack. Two pointed frees from O’Sullivan, sandwiching Gaels’ only score in the third quarter from an O’Donovan free, closed the gap to a single point. Niall Kelly struck twice in the 45th minute to level the game and then shove his side in front for the first time in the game. Another O’Sullivan free doubled the lead and it was 1-9 to 0-10 at the second water break.

When O’Sullivan pointed two more frees early in the last quarter to stretch the lead to four, one feared for the Gaels but they lifted their game in the closing stages. Eoin Ferguson closed the gap to three, O’Sullivan (free) made it four again. Then, when a Cian Ryan shot was deflected into the Newcestown net, the lead was down to a point amid a welter of excitement. It was the Gaels’ supporters who were cheering when O’Donovan hit a great equaliser in the 60th minute and the title was really up for grabs. 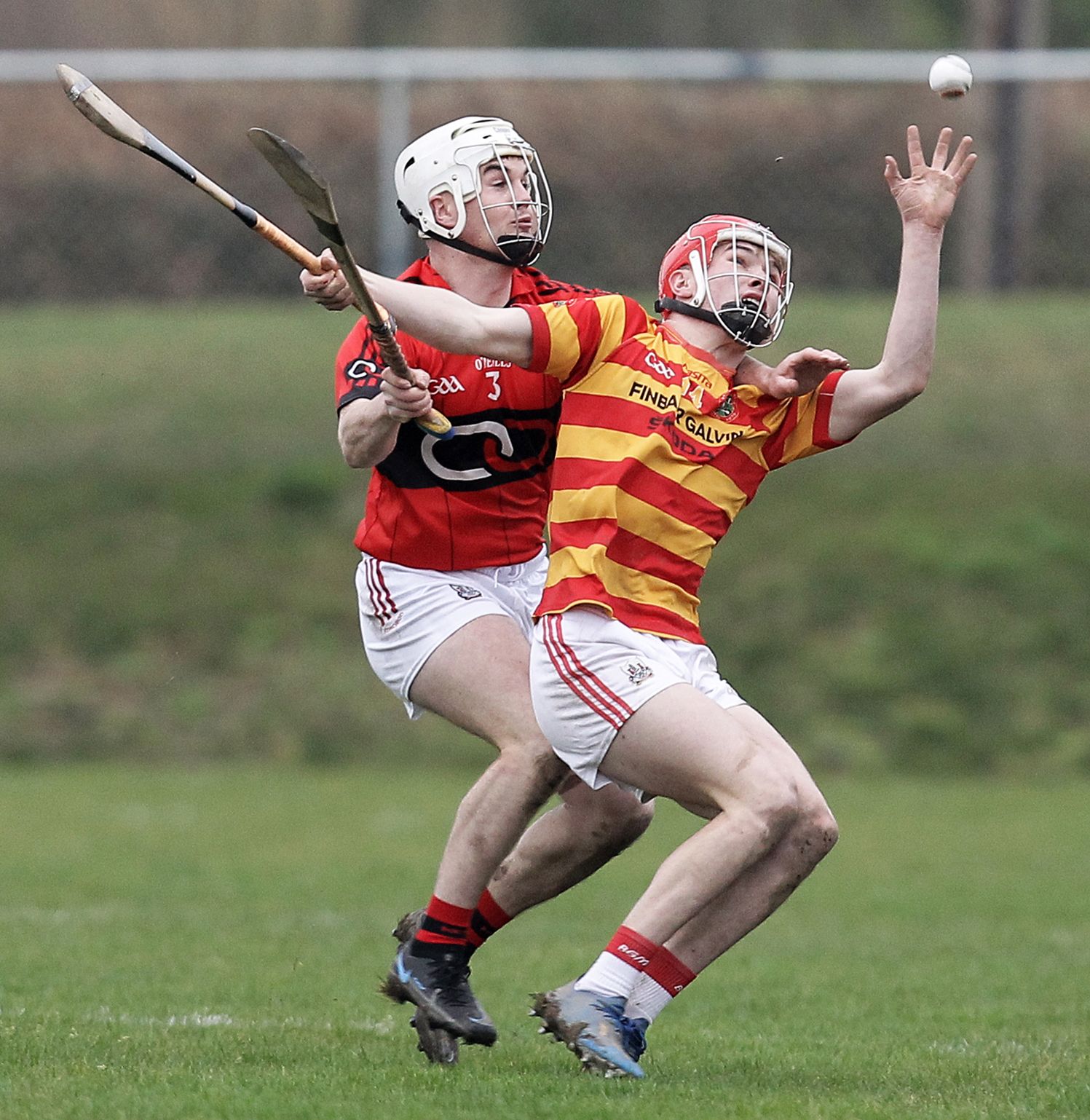 The strong David Buckley had been introduced as a sub in the closing stages and he made a big impact as Newcestown finished the stronger side. It was into injury time when Ciarán O’Donovan shoved the St. John’s brigade back in front again. Any lingering hopes the Gaels harboured of forcing a draw were shattered when Buckley hit a fine, final score for the winners.

‘It’s nice to know we’re going in the right direction with these lads and they can go on from here now. Fourteen of that team are underage again next season and it’s a pity there won’t be any county in U21,’ Finbarr O’Callaghan added.

The cup, named after the late Newcestown Gael Teddy Kehily was presented to joint captains, Conor Goggin and Timmy Coughlan, by the new chairperson of the Carbery Board, Aidan O’Rourke, a first trophy to his own club in his new role. A word of praise for the St Plunkett’s club whose pitch was in immaculate condition for December, and to young referee Patrick O’Mahony on a top-class display of refereeing.