JOHN Murphy jumped an incredible 290 places in the world rankings after his sensational showing at the Alfred Dunhill Links Championship last weekend.

As well as pocket a career-best €81,543 and a spot in this week’s Spanish Open in Madrid, Murphy has also risen from 896th in the world to 606th in the latest rankings.

He has also jumped to 192nd in the Race to Dubai rankings and he’s now chasing a spot inside the top 125 places that would guarantee him full playing privileges on the European Tour next season.

While his attention is now firmly on this week’s Spanish Open, Murphy probably hasn’t had time to fully celebrate his brilliant performance last weekend when he held his own against some of the best golfers in the world. Even better, he looked right at home on centre stage.

After shooting rounds of 69, 69 and 67, the Kinsale man went into the final round on Sunday in the final pairing, alongside 2016 Masters champion Danny Willett, dreaming of glory.

Back in May, Murphy was on the Great Britain & Ireland that lost to the USA in the Walker Cup in Florida, but now, five months on and having turned professional, he positioned himself right in the hunt for an incredible fairy tale win on a course that he knows well.

In 2018 he won the prestigious St Andrews Links Trophy on the Old Course – and he was hoping to repeat that triumph last weekend, but on a far larger scale.

‘It's hard not to look at the leaderboard when you are sitting in second place in the tournament,’ Murphy said after shooting a 67 on Saturday.

‘When you are not familiar with this environment, you are obviously thinking of all those things, the rewards, the money, everything. But at the end of the day, it's something you have to put to the back of your mind pretty quickly.’ 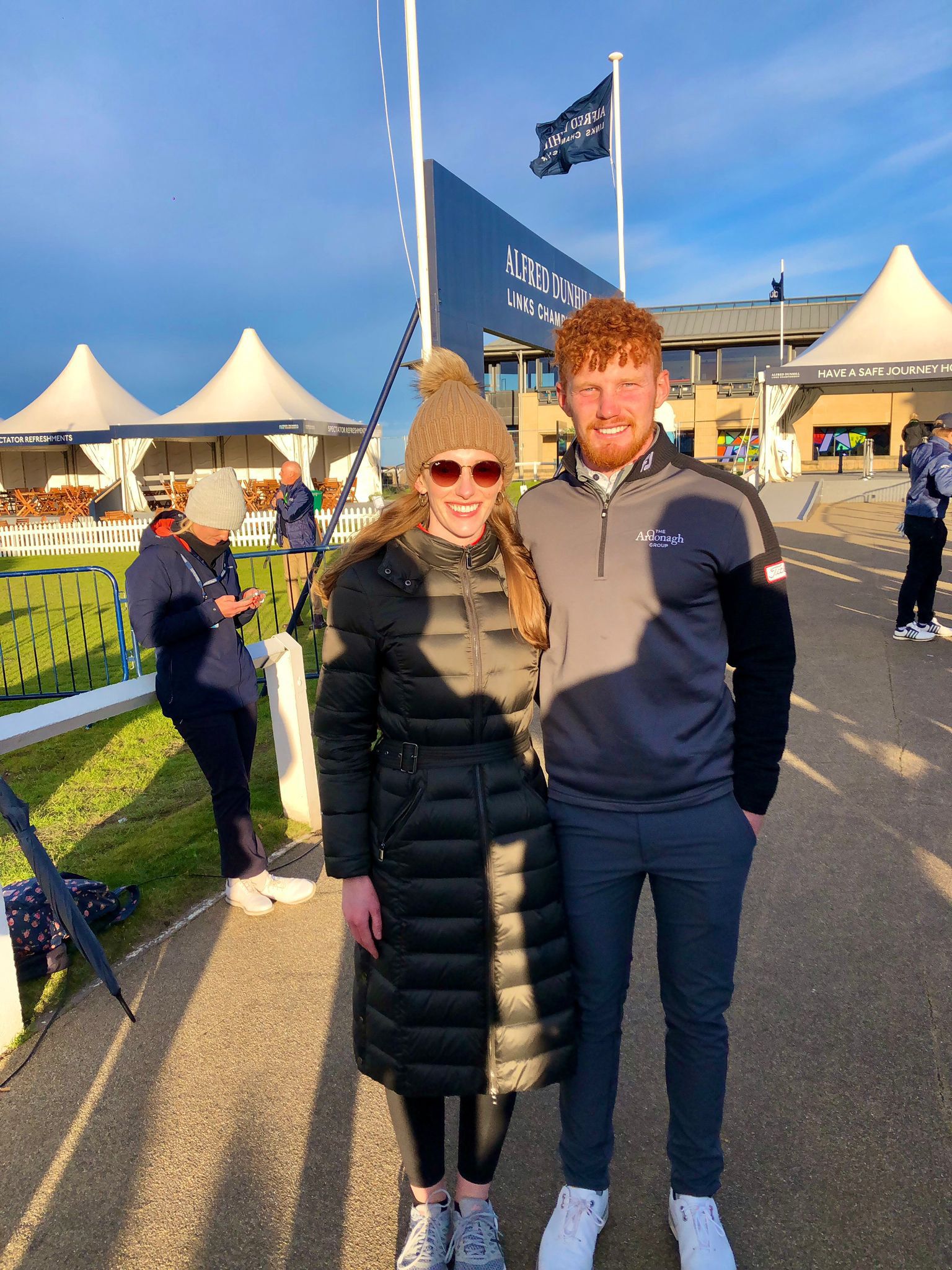 John Murphy pictured with his sister Faye after his top-ten finish at the Alfred Dunhill Links Championship.

Showing nerves of steel, Murphy enjoyed a strong start to his final round. Three shots behind the overnight leader Willett, Murphy birdied three of his opening five holes to move to 14 under and, at one stage, second place and within two shots of Willett.

But Murphy’s dream was dashed at the par-four ninth when a double-bogey six saw him slip down the leaderboard and, ultimately, out of contention for first place.

‘I hit the ball lovely all week, just that one tee shot cost two shots; it was almost a par three today, it was playing easy, and I felt like I dropped three there really. Danny (Willet) made birdie, I made double; it was a three shot swing. That was the turning point. I fought pretty hard and thankfully managed to put an under-par number on the board,’ explained Murphy, who had local caddie Stephen Neilson on his bag last weekend.

Impressively, the young West Cork golfer kept his composure and didn’t let his disappointment at the ninth affect him on the back nine, as he recorded a one-under par 71 for a 12-under par total, which saw him finish tied for ninth.

Willet’s closing round 68 saw him finish on 18-under and take home the top prize, while the top ten also included a number of the European team that had been in action at the Ryder Cup the previous weekend. Shane Lowry finished joint-fourth (-15), with Tyrell Hatton joint-second (-16) and Tommy Fleetwood joint seventh (-13) – and that’s the calibre Murphy was up against last weekend.

His target is to become a regular at European Tour events, having received a sponsor’s invite to compete at last weekend’s Alfred Dunhill Links Championship, and he’ll certainly take a lot of positives from his top-ten performance.

‘I know I have a lot of improving to do. I know that I’m not the longest hitter out there; I’m not the straightest driver out there; my approach play isn’t the best out there, my putting is not the best, but when I stand on the first tee, I convince myself that I can go to toe-to-toe with anybody out there, and I think I can,’ he explains.

‘So I’m just going to try and improve in any way I can, learn from this week. You can always get better. So I’m going to see what areas I can improve going forward, and I’m looking forward to that improvement.’

Winner Danny Willet, who played the final round on Sunday with Murphy, was impressed by how the Kinsale Golf Club man went about his work.

‘John played good and was playing lovely. He made a couple of silly errors, and nine killed him, like really killed his momentum that he had going. There was again a silly error on 16, but John played a nice up-and-down on the last for birdie to finish top 10 that gets him into (this) week. Though this is kind of what you want to do when you’re first starting out. These top-10s are massive, not only for the money, but for the opportunity to play the week after when you’re clearly playing some good golf,’ Willett said.

Murphy, a graduate of the University of Louisville, stepped into the world of professional golf earlier in the summer off the back of a stacked amateur career that included big results on both sides of the Atlantic. Now he’s starting to make a name for himself in the pro-game, and he’ll hope to carry last weekend’s form into the Spanish Open this week. This, he hopes, is a sign of bigger and better things to come.