Even if both of their goals were fortuitous, there good be no quibbling about the merit of Diarmuid Ó Mathúnas victory over Fr O’Neill’s in the Co-Op SuperStores county Junior B football championship final in Pairc Uí Rinn last Saturday.

They were clearly better-balanced than the east-Cork men, whose challenge was sustained for the most part by high-fielding Jason Hankard around the middle and particularly by the brilliance of Billy Dunne in their inside line.

Dunne’s ever-present menace meant Mathúnas couldn’t afford to breathe easily until a lobbing free by wing-back Barry Lordan was deflected to the net by Fr O’Neill’s defender Podge Butler in the 60th minute.

That made it 2-12 to 1-9 before dynamic centre-back Sean Crowley tacked on a point to put the finishing touch to a convincing display and a memorable triumph.

It featured major contributions from Crowley and Ronan McCarthy in the central defensive berths, Kevin O’Donovan at midfield, and Matthew Draper and Conor O’Sullivan in attack, although it’s fair to say every Mathúnas player put a shoulder to the wheel in the showpiece. 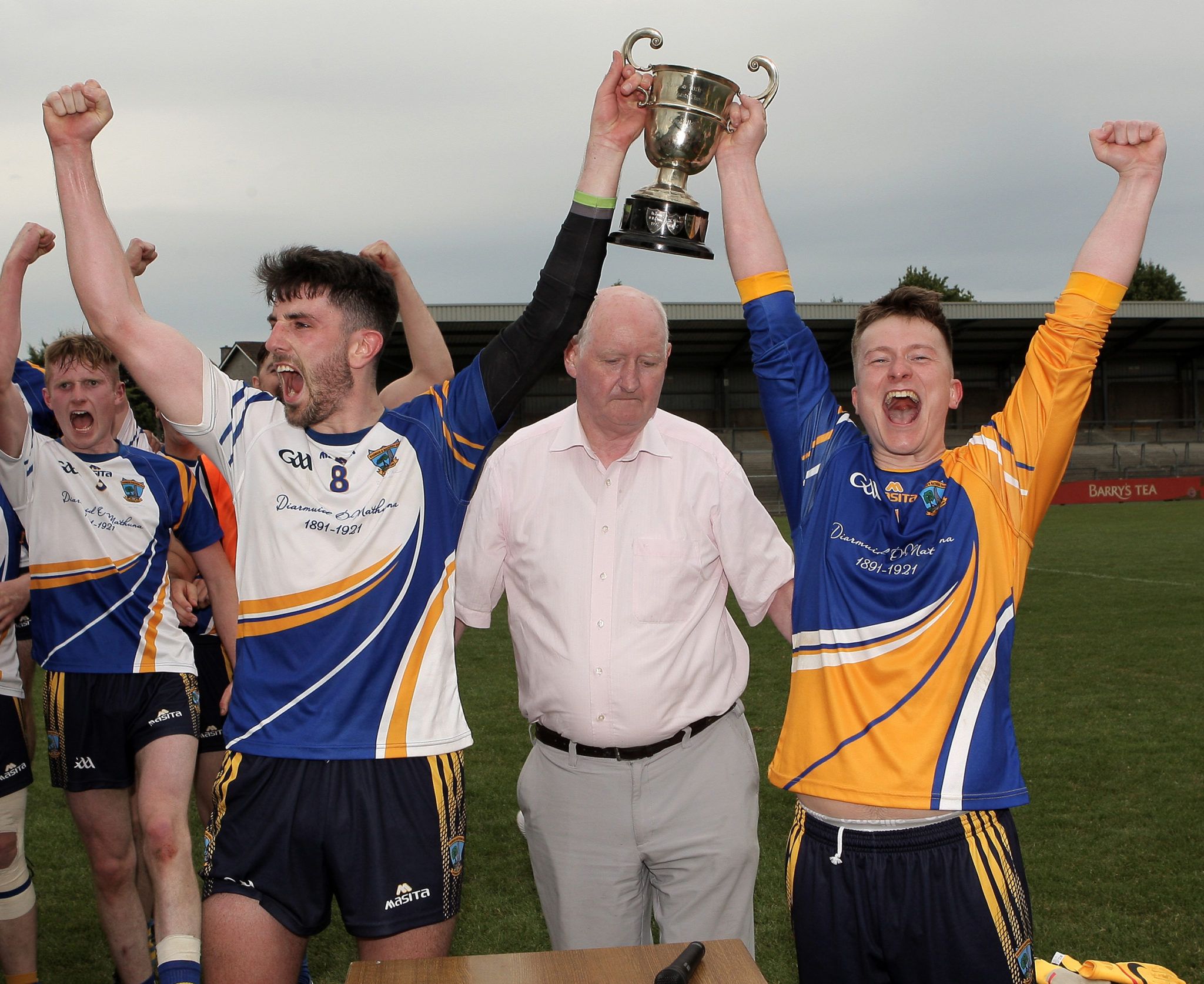 Gearoid O'Donovan and Gavin O'Leary joint-captains of the Diarmuid Ó Mathunas team raises the trophy after their team's victory over Fr O'Neills in the Co-op Superstores Cork JBFC final at Páirc Uí Rinn on Saturday.

That was acknowledged afterwards by coach Liam O’Reilly, who felt it was a case of saving the best wine until last on the part of his charges.

‘It was a fine team effort and undoubtedly the lads’ best performance of the campaign,’ said O’Reilly, pointing out that expectation levels were extremely low when he was asked to join the backroom team.

‘We were regarded as no-hopers at the start of the year, and, rightly so, because there was nothing to indicate we could play football the way we played it to get this mighty win in the final.’

O’Reilly revealed it was club Chairman JP O’Callaghan who sparked things off when deciding something was needed to freshen things up.

‘I could see the team had potential when I came on board, and once the lads realised they could play a bit, they made light of being underdogs time and time again, including today.’

Mathúnas showed no shortage of self-belief from the outset against Fr O’Neill’s, going four points up courtesy of Kevin O’Donovan, Matthew Draper, Conor O’Sullivan and Jack O’Callaghan before Kevin O’Sullivan got the losers off the mark in the 15th minute.

After Sean Crowley made it 0-5 to 0-1, however, Mathúnas early good work was undone when Billy Dunne pointed for Fr O’Neill’s and Kevin O’Sullivan scrambled in an an equalising goal, with Dunne having initially brought the best out of Gavin O’Leary between the sticks for the winners.

The tactic of operating with Daniel Harrington as a roaming full-forward yielded mixed results for Fr O’Neill’s in that his marker Ronan McCarthy got through an amount of good work outfield for Mathúnas, but the south-west side looked vulnerable at the back as Billy Dunne prospered in the resultant extra space close to goal.

To say Dunne caused the alarm-bells to sound for Mathúnas every time the ball came his way would be putting it mildly.

He was the chief-architect of almost all of Fr O’Neills’ fruitful raids, including a point by Paudie McMahon that allowed them to lead by 1-3 to 0-5 with 23 minutes gone.

Dunne set Kevin O’Sullivan up for another before completing his side’s first-half tally himself in stoppage time.

All of which meant Mathúnas had to rely on an opportunist goal in the 25th minute from Patrick Crowley - who pounced to score after a Conor O’Sullivan high delivery came back off the upright – to go in level, 1-5 to 1-5,  at half-time.

Crowley netted again five minutes into the second-half, but the score was disallowed as he was deemed to have picked the ball off the ground before shooting.

Prior to that, Gavin O’Leary had saved well from Fr O’Neills’ Eoin Motherway, who had been put clean through by the irrepressible Billy Dunne, but Ó’Mathúna’s gradually began to assert their authority as the second-half progressed.

Aided by points from Conor O’Sullivan and Matthew Draper, who chipped in with two apiece, they went three up before Jack O’Callaghan also bagged a brace, the second from a free, to make it 1-11 to 1-6 at the three-quarter stage.

They were five points to the good again, 1-12 to 1-7, after Ronan McCarthy found the target in the 53rd minute, but it took some last-ditch defending on a couple of occasions to prevent Billy Dunne from grabbing a goal that might have enabled Fr O’Neill’s to haul themselves back from the brink on the run-in.

As it was, Dunne slotted over two points to get O’Neill’s within striking range before Barry Lordan’s goal finally sealed the deal for Mathúnas.