Giddy up takes new meaning as horse racing fans get giddy with it on the run up to mid-March finishing posts. Like a child’s pre-dawn Christmas day, adrenaline heightens toward Cheltenham week. Champion chase. Champion hurdle. The Gold Cup.

But home also counts. In 1996 many West Corkonians had no choice but to choose Imperial Call.

Owned by Lisselan Estate near Clonakilty, it was a must-bet. Trained in Carrigadrohid by Fergie Sutherland, the Cork in Imperial Call was strong.

Ireland’s best hope of a Gold Cup win since Dawn Run’s breath-splitting win in 1986. One Man, clear favourite, in West Cork clearly not.

The winner’s enclosure swarmed with so many extra bodies that O’Dwyer struggled to lift his arms to unsaddle the unfazed winner. 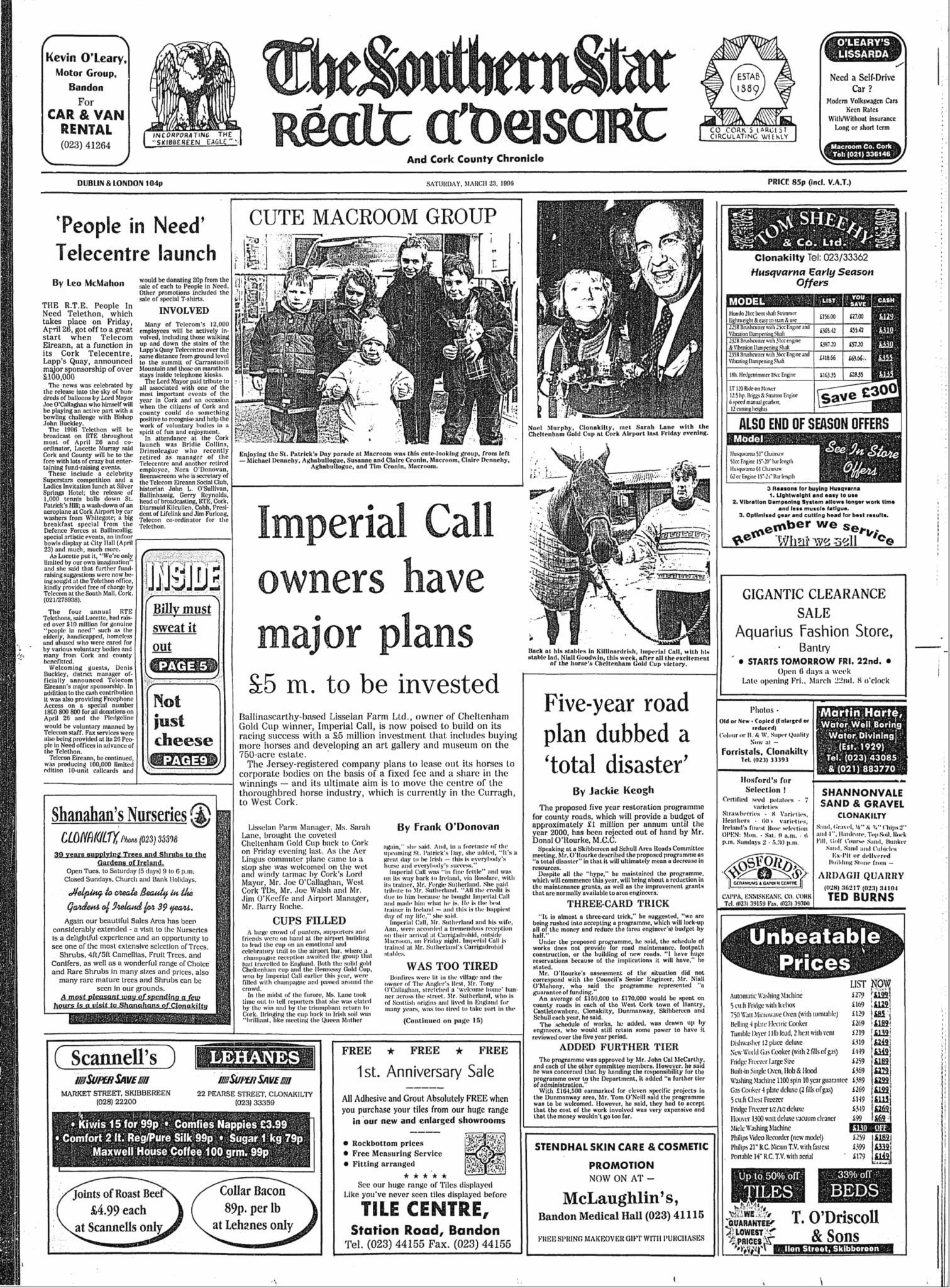 If West Cork can’t own the winner, then ride the winners. Noel Fehily from Coppeen added three top West Cork Cheltenham moments to the list. He added more than these but Championship races rise above other obstacles.

In 2012 Fehily returned to Cheltenham after missing the previous two festivals through injury. His bad luck ended flying past hot favourite Huricane Fly to win the Champion Hurdle by almost four lengths. Fehily’s champion was Rock on Ruby. Ruby Walsh rode the Hurricane.

Condolences were briefly given to My Tent or Yours, second for the third year running. Briefly lasts a blink.

Fehily beamed his way into the winners enclosure for his second Champion Hurdle victory as Coppeen championed its way into another top West Cork Cheltenham moment.

Next day brought another great victory in the Champion Chase. Brighter than any crown was Special Tiara’s win after two years finishing third - almost a case of the My Tent or Yours.

Fehily added to the theatre of Cheltenham with great stories unfolding at each race, every hurdle and fence. Although he hung up his silks in 2019 he continues to win with the Noel Fehily Racing Syndicate.

If West Cork can’t own or ride the winner, then train the winner. In 2006 a bold, up-front Newmill sailed along to win the Queen Mother Champion Chase.

First trained by Thomas O’Leary near Ballinascarthy before transferring to John Joseph Murphy at Highfort Stud near Innishannon, the West Cork credentials were solid.

Newmill was an outsider in a race which included superstars Kauto Star and Moscow Flyer. Murphy was also an underdog up against superstar trainers.

Who doesn’t shout for the under-horse? West Cork support was strong as Andrew McNamara steered forward from the off, avoiding any trouble behind him.

‘Value for money at least’ is the frequent phrase when a betting choice gives a forefront run but wanes at the end.

Nerves jangled waiting for the wane but Newmill did not fade. He relished the fast pace and thrived leading the posse. Further and further he stretched his lead, winning by nine lengths.

In the winner’s enclosure a tricolour hung over the victor like a lowered sail, or maybe like taking the wind from the sails of the horses behind him.

Directly after the climax of the Gold Cup the Foxhunters Chase is like a big concert warm-up act in reverse. Some see it as an anti-climax but maybe it is exactly the sorbet needed to control the adrenaline palette.

The Gold Cup for amateur riders. In 2006 instead of an anti-climax it was another West Cork top Cheltenham moment. 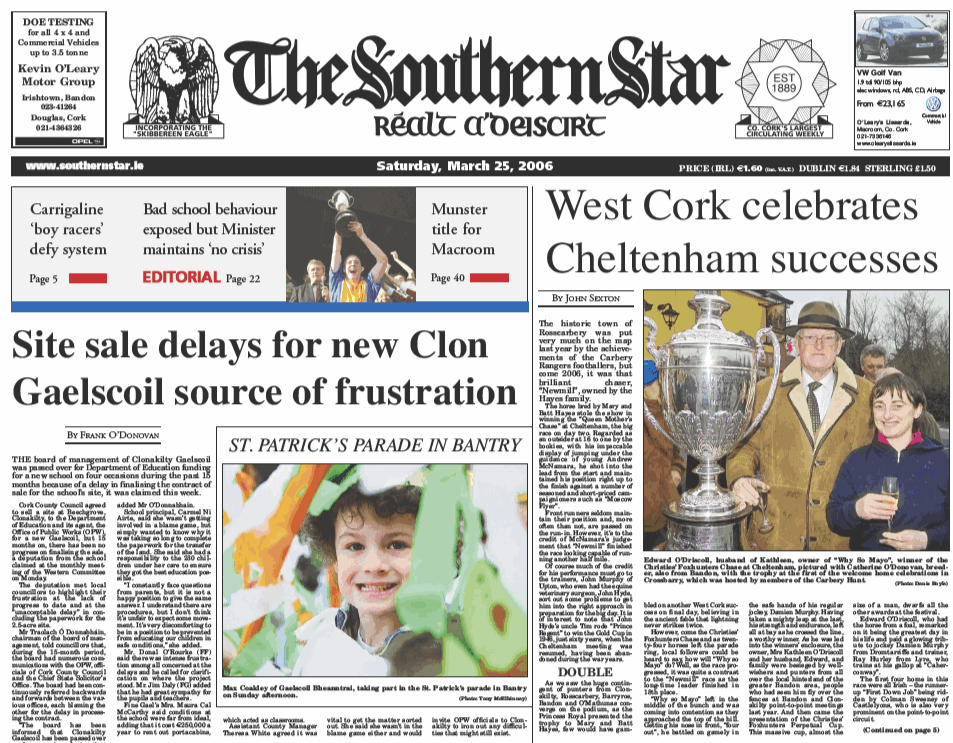 Whyso Mayo, powered ahead of First Down Jets under Damian Murphy’s navigational skills.

Stabled near Rossmore with Ray Hurley, a small stable ready and able for the big stage. He also trained Imperial Call in the latter stages of his racing career.

Owned and bred by West Cork woman Kathleen O’Driscoll, trained in West Cork by a West Cork man, this was a thoroughbred West Cork Cheltenham moment.

Cheltenham’s Stayers Hurdle is the paramount stamina test for hurdlers.

A perfect match for Dunmanway-native Gavin Sheehan, his perseverance and courage also tested in 2015.

He passed with winning colours, his first Cheltenham victory. Like many other great jockeys, Sheehan spring-boarded from the pony circuit to the professional ranks.

Did we leave out any of your favourite West Cork Cheltenham moments? Aidan Coleman steering Paisley Park to victory? The Courtmacsherry-bred On The Fringe landing the St. James's Place? Let us know by emailing [email protected]

What about this year's Festival? Four days, 28 races = exhaustion, but happy exhaustion.

And there will be horses. Above all the horses.

I came upon the horses drenched in bright sunshine, yard after yard of blue-black ironed silk - (Henri Cole)