Luke Meade has become an integral part of Kieran Kingston's Cork side.

CORK’S failure to win the All-Ireland senior hurling championship in 2021 means that the county’s previous longest wait for the title, from 1903-16, has been exceeded.

However, the fact that the Rebels made it to the final for the first time in eight years represented a clear uptick in form. Newcestown’s Luke Meade was a key figure for Kieran Kingston’s side and he was glad to have helped the graph point upwards.

‘There was progress made, that was the main thing,’ he says.

‘The 2020 season was very disappointing, there were other counties that had a couple of months to prepare for the inter-county season whereas we were coming right off club championship.

‘We thrown together nearly at that stage and had so little time to get prepared. For the 2021 season, obviously there was another bit of a lockdown but we were able to work on our own and get fit ourselves and then we had plenty of time for planning how we wanted to play and working on people understanding the system.

‘We did a bit of work on Zoom during the lockdown, we got the theory of it and the basis of it done then and we were able to go straight into it when we got back after lockdown.

‘Saying that, there was a disappointing end to it and it just shows us that there’s a lot more work to be done.’

Cork lost four games across the Allianz Hurling League and the Munster and All-Ireland championships – one was to Galway in the final league game while the other three were to a rampant Limerick that ended the season with a third All-Ireland in four years.

Having lost to the Shannonsiders in the Munster semi-final, what was the feeling like in the camp?

‘We did well up to a point and they caught us for two goals before half-time and it was an absolute killer altogether,’ says Meade, a primary teacher in Bishop Galvin Central School in Newcestown.

‘I thought we did pretty well for a lot of the game, and after a game like that, where it’s not knockout, you’re not going to be down in the dumps. You have to take the positives from it and move on and that’s what we did, really.

‘We felt that we were in a good position as we had had a good league campaign as well, so we were in an okay place.’

After that game, Cork had a bye for the first round of All-Ireland qualifiers, drawing Clare in the second round. A 3-19 to 1-23 victory kick-started the campaign, though Meade is quick to credit goalkeeper Patrick Collins for his late save to deny Clare’s Tony Kelly a winning goal.

‘That was a massive save, a turning point, really,’ he says, ‘because Clare were going very well at the time.

‘It was a massive game and we played fairly well but it still went down to the last puck of the match, but again we took the positives from it. It was a tight game and in other years we mightn’t have won games like that.

‘We were answered questions and we came through it, so there were huge positives from that.’

After that, Cork saw off Dublin in the quarter-finals and then Kilkenny after extra time in the semis to set up a re-match with Limerick. hile the intention is to always treat a final like just another game, the reality is different and Limerick’s experience of the big day was one factor in a 3-32 to 1-22 final score.

‘Everywhere you looked, it was all about the final,’ Meade says.

‘It was the first one since 2013, so it was a fairly big deal. It’s personally up to yourself really, not to block it out, but not to get carried away.

‘You try not to spend too much energy on it but it’s still a different game, bigger than you’ve played before. We’ve played in the game now, obviously it didn’t go well, but we have that experience to put away and draw back on.’ 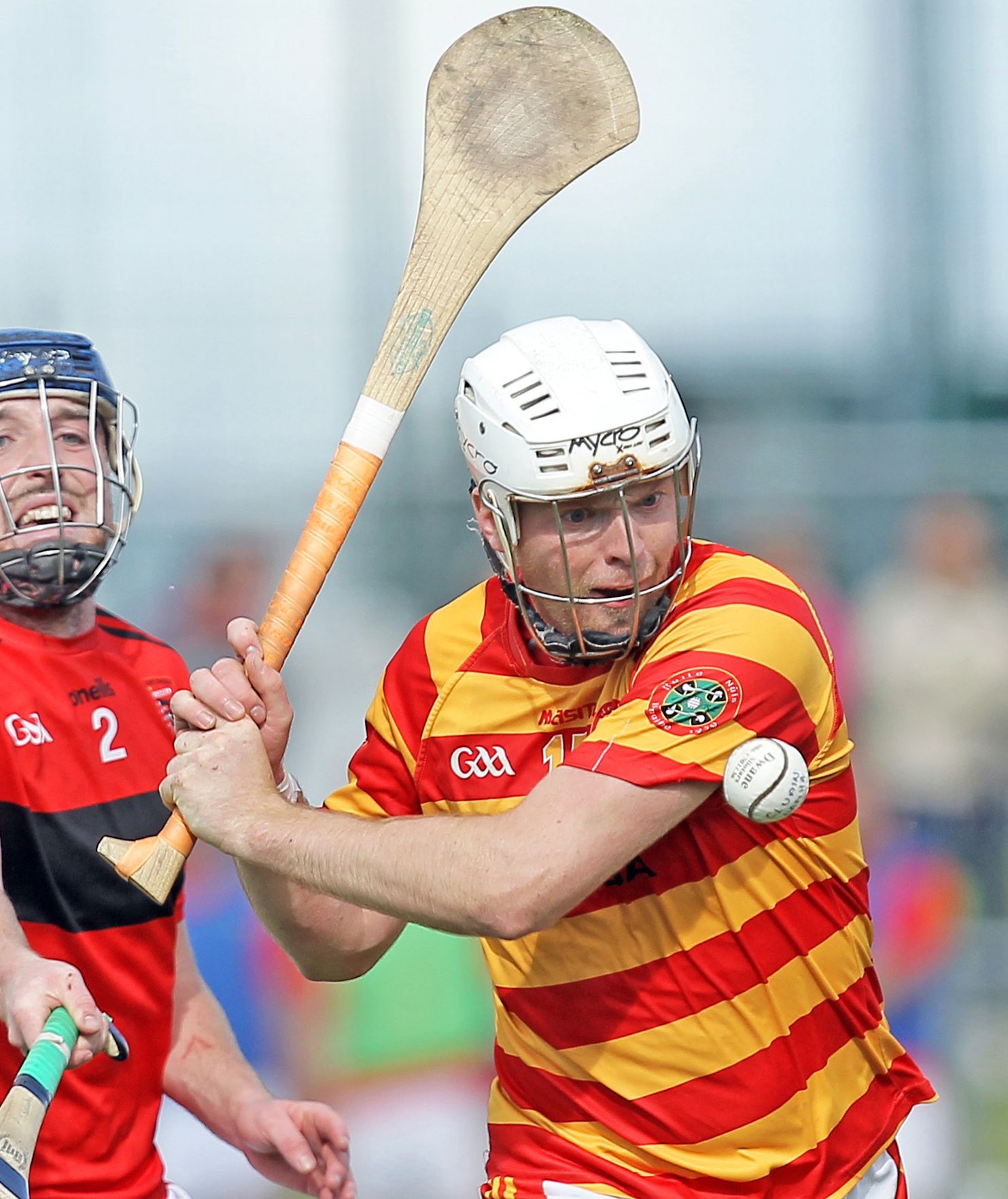 Luke Meade is a key man for his club Newcestown in both hurling and football.

And what is it about Limerick that makes them so good?

‘They’re what everyone is chasing and they showed that in the final,’ Meade says.

‘I thought we got to the final on merit but they were a lot better than us on the day. They’ve been working to the same system with a while, tweaking and improving on it every year.

‘They’re just all-round a really good team, physically and hurling-wise, they all know what they’re doing and they’re well-coached. It’s up to the rest of us to try to catch up. I’m there five or six years and it was the first final we’ve got to, so we know how hard it is.

‘The Munster round-robin is back next year and every county is going pretty well so getting out of Munster is the first job and that’ll be hard enough. We just want to make sure that we’re playing well.’

During the season, Meade featured at midfield, half-forward and as a roving corner-forward. Such versatility could be seen as a negative in terms of nailing down a regular spot but he views it positively.

‘I’ll play where I’m needed, I’m not going to be kicking up a fuss. Playing against different teams and systems, you might be needed for various jobs so I’m happy to be versatile. Hopefully, most games, there’s a role for me.’

That’s also the case with his native Newcestown, though it was a frustrating season for the club, too.

Having reached the semi-finals and quarter-finals in the last two years of senior football, they failed to get out of what was a strong group and then lost to Kanturk in the senior A hurling semi-final, beaten in extra time and seeing an eight-point lead evaporate before the end of normal time.

However, as with Cork, Meade sees a positive outlook.

‘Football-wise this year, we never really got going,’ he says.

‘We beat Ross but we didn’t even play that well in that game, either. It was kind of a blessing in one way, we were thinking that it might help us with the hurling preparations but that was heart-breaking against Kanturk. We were up eight points and a man up, too.

‘In fairness, Kanturk are a very good team and they won it fairly squarely but we should have closed it out.

‘I couldn’t see anyone retiring and we have a fairly young team. I don’t think we’ll be going anywhere, we’ll be hungry enough for next year.’