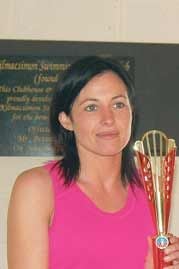 BRIAN Murphy from the Iveragh club in Kerry became the first winner of a unique cup that marks the achievements of three famous athletes from the Knocknacurra area outside Bandon.

Although the numbers for the inaugural road race organised by Kilmacsimon Swimming and Rowing Club may have been on the low side, all who participated were delighted to be part of the historic event which honoured Patsy O’Flynn, Bob Hales and Bill Nolan – three local men who went on to achieve Olympic and national honours.

Held over an undulating seven-mile route, a lovely touch added to the event was the signs outside the former homesteads of the three men who were part of the original Knocknacurra Athletic Club in the early part of the 20th century.

Murphy, a native of Valentia Island who now lives in Aghabullogue, was on his own from the start and eventually finished over three minutes clear of Bandon athlete David Craig, recording a time of 39:07 for the seven miles.

Another Bandon man, Tom Sheehan, had a fine run to take third spot and first M50 in 46:32 with fourth place going to Kevin O’Crulaoi.

There was a local winner to the women’s race as Sinead O’Regan – who lives on the race route – took the honours when finishing an impressive sixth overall in a time of 48:13. Sinead only took up running two years ago as a member of Bandon Fit4Life but clearly has made rapid improvement since.

Geraldine O’Sullivan from Bantry showed she was well recovered from the previous Monday’s Cork half-marathon where she was first in the F55 category when taking second spot in 52:24 with Anne Bamford third in 54:51.