Joan Healy is gearing up for a long 2023 season.

SHE didn’t say it out loud, but Joan Healy had planned to retire from athletics by the time she turned 30.

The Ballineen sprinter had it all worked out: qualify with the Irish women’s 4x100m team for the Olympic Games in 2021 and then bow out on a high.

But the season-ending Achilles injury Joan suffered in March 2021 dashed her dreams of competing in Tokyo.

It also means she has unfinished business with athletics.

She celebrated her 30th birthday last September, with her retirement plans torn up. Instead, Joan has stepped it up a notch. She doesn’t want any regrets.

Her school, Terence MacSwiney Community College in Cork city, agreed to her request to reduce her teaching role to part-time. She now works Monday to Wednesday, and that allows her to concentrate on athletics for the rest of the week. It’s allowing her more time to focus on recovery between training sessions.

‘It was a now-or-never moment,’ Joan explains.

‘Being honest, before the Achilles injury happened, there was a really good chance of that relay team going to the Olympics. Without ever saying it, I had seen the age of 30 as retirement age. In my head I thought that the relay team would go to Tokyo and I would retire after that. Then the Achilles injury happened and I didn’t go to the Olympics so there is unfinished business.’

Joan is determined to make the most of this chance. She is 30 now, bought a house with her fiance Fintan Brennan from Ovens last year, and they are getting married this October. She doesn’t receive any Sport Ireland carding grants, and has to dip into her own pocket to cover physio, travel and competition costs – but the West Cork woman feels this is a chance she needs to take.

She opened up her 2023 indoor season at round one of the national indoor league on January 8th – her first 60-metre races in two years – and it was a chance to dust off the cobwebs from an uninterrupted winter training block designed and overseen by her coaches, Derval O’Rourke and Marian Heffernan.

‘We were looking at getting me stronger and fitter, and we didn’t do a whole pile of speed. We are using these early races as speed sessions,’ she explained. ‘I am in a very different position this year. We didn’t aim the training programme for the start of January; we are aiming for the middle of February.’ 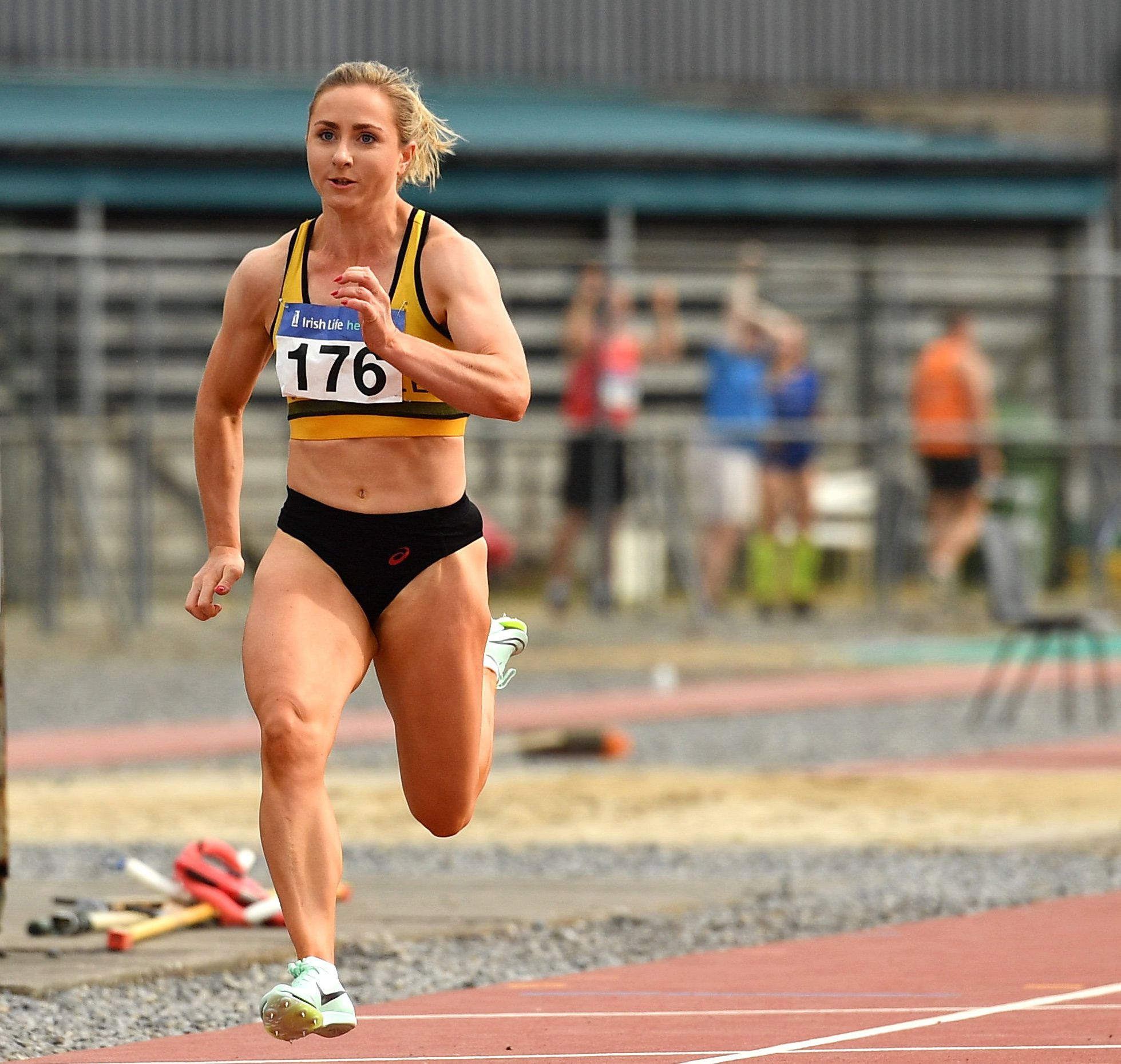 Joan Healy is planning for a long and successful 2023 race season.

Joan ran in three 60m races at the Sport Ireland National Indoor Arena in Dublin, and posted 7.40. 7.46 and 7.38. It was a mixed bag, with her reaction time off the blocks not what she wanted, but it has her up and running this season.

‘The shape I am in, I didn’t feel sharp on the track, so hopefully that sharpness will come into play in the next few weeks and I’ll knock out the times and get the European indoor standard.’

The European Indoor Athletics Championships will be held in Istanbul in early March (2nd to 5th) and Joan wants to be there in the women’s 60m. The 60-metre qualifying standard is 7.24, which is significantly faster than Joan’s PB of 7.31 set in February 2018, but she feels her new approach will help her hit new speeds in this indoor season.

‘In previous years the standard for the European championships has been 7.37 or 7.35, so they have taken over a tenth off it, and that’s a big drop.

‘Where Derval and Marian have put my mindframe is that you would want to be running that time going to these championships. I want to get the standard. I don’t want to go to Istanbul to run a heat. I want to get out of my heat and into a semi-final and challenge for a final.’

The plan is for Joan to be running significantly faster at the AAI Games in Athlone on January 29th and then stepping it up through February, with the national senior indoors on February 18th and 19th.

‘It is really about trusting the process,’ she says.

‘My coaches have taken me away from really raw speed during the winter. You stay in touch with it, but there has been a lot of covering a higher volume at a sub-max pace, and that was quite new to me.’

Her gym programme stepped up too ahead of what Joan hopes is a long season – the World Athletics Championships in Budapest are in late August and are also on her radar, ideally in an individual event and with the Irish women’s 4x100m relay team if it gets up and running again.

With the new World Athletics ranking system, it’s important for athletes to have a fast indoors as that can lead to a longer outdoor season, and Joan hopes her decision to devote more time and energy will put her in the mix. It’s now or never, as she says.