IN most circumstances, monetary requests from national school pupils to their parents are probably run of the mill. Few, though, are likely to match that of Killeady’s Jeff Quilter.

One day, and just after he hopped off the bus, his request, while not actual monetary, was very much to the point: ‘Dad, can you buy me a motocross bike?’

The fact that Jeff’s older brother Killian was in his third and what proved to be his final year (so far) in motorbikes may have had something to do with it. Indeed, Killian also showed no interest in the sport until he too asked if he could get a bike. On both occasions, their dad, Glynn, obliged.

‘Killian showed great potential off the mark and finished third in the Southern Motorcycle Championship. I put a bit of money behind him the second year and he won that championship. Indeed, he narrowly missed out on winning the full Irish Championship,’ says Glynn.

As it wasn’t a case of popping in to a local store or ordering online, it took about a month or so for Glynn to organise Jeff’s request. Once completed, it allowed Jeff hone his skills on the old soccer pitch in Killeady. The family home is just a short distance up Killeady Hill, a few kilometres from Crossbarry. The old pitch proved to be an effective stomping ground. In his first race in 2017 near the Halfway Roundabout, Jeff netted a podium finish.

On board his KTM 65, Jeff went on to compete at all the local tracks, including Vernon Mount, Watergrasshill, Brinny, Mogeely, Youghal and other places such as Carlow where he shone. He moved up to a KTM 85 but came to grief in Watergrasshill. He landed on a stone and broke his left elbow. Jeff was soon back up on the bike but landings were hurtful due to a lack of strength in his left arm. Although he took time out, he returned but this time circuit racing replaced motocross.

‘I began racing in the Irish Minibike Championship (IMC) last year,’ explains the fourth-year student of Coláiste an Spioraid Naoimh in Bishopstown.

The IMC is also referred to as Pit Bike Racing and it’s extremely popular in Northern Ireland. The concept is based on providing all competitors – regardless of age, ability or ambition – with a cost-effective series in a competitive yet family-friendly environment. It was first introduced in 2018 and this year, the fourth season, will for the first time have a race at the Kartworld track in Watergrasshill. The track, just off the N8, is a familiar venue for 17-year-old Jeff.

‘We have a lot of our track days there. David Walsh (proprietor) has been very good to us. There are times when we would like to test at the very last minute and David always facilitates us,’ Jeff says.

His first race in the ICM was in Nutts Corner, a prominent racing circuit close to Dundrod, some 15km north-west of Belfast. The journey north took almost four and a half hours, before father and son arrived at the County Antrim venue.

‘It was good fun and I finished fourth in the first race,’ Jeff says.

All forms of motorsport are dangerous and it didn’t take long for Jeff to find out that motocross wasn’t the only discipline that has its perils.

‘I crashed in the second race. The handlebars were bent and that was that for the day. Thankfully, I had no injuries. It all happened so quickly,’ he recalls. 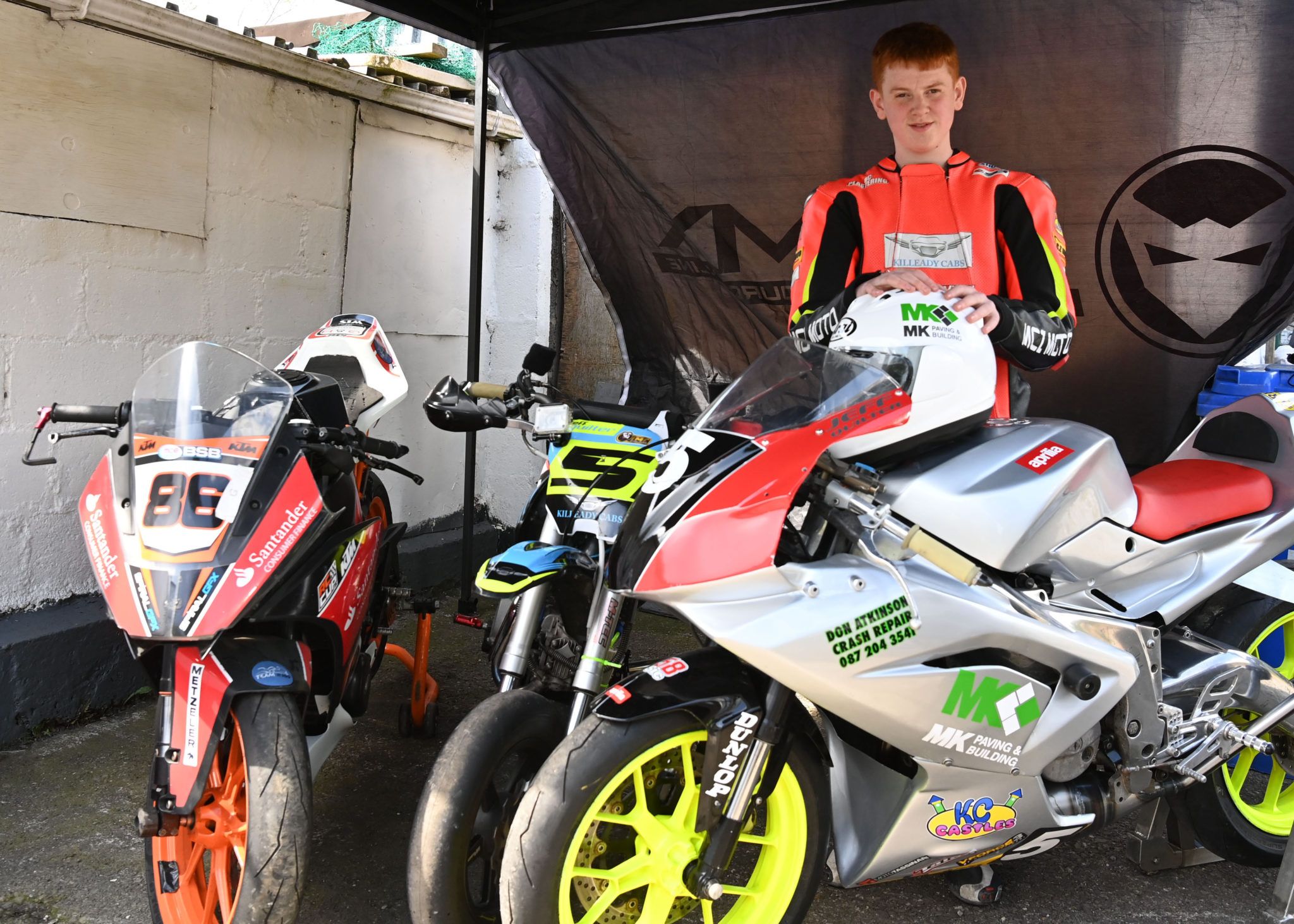 Jeff Quilter with the motorbikes he will compete on this season. From left, the Team #109 KTM 390cc machine, his Stomp 140cc Pit Bike and his Aprilia RS125.

In that first season, Jeff also raced in another famous Northern Ireland racing venue, Kirkistown, as well as in Athboy, County Meath. Recalling the season, he said: ‘I won in Nutts Corner and Athboy and finished third in the championship.’

The fact that there is one of the 2021 IMC rounds in Watergrasshill is a bonus but that’s well down the line for the moment. Jeff’s a busy boy right now as he also plans to contest the ‘Young Gun Championship’ – a six-race series that’s part of the Mondello Masters and one that will see him swap his Stomp 140cc Pit Bike for the four-stroke Team #109 KTM 390cc motorcycle. Team #109 was set up in honour of the late Sean Hurley, and Glynn Quilter knows those involved.

‘I knew Sean originally. I know Paul Tobin, the team manager, and of course Dave and Mairead (Hurley) are local to us,’ Glynn says.

‘Team #109 kindly gave us the loan of their KTM for racing. Jeff will be training and doing his track days on his two-stroke Aprilia RS125. The KTM machine has about 50 percent more brake horsepower than the Aprilia but time on the latter is used to ensure corner speed and momentum is kept as high as possible so when race day arrives Jeff is ready for the challenge.’

As for the season, Glynn added: ‘To have the Team #109 bike is great. It makes it much easier. It will be a good learning year, it’s all about enjoying it, the results will come when you are happy on your bike.’

Setting his sights a little further down the road Jeff would relish the opportunity at being part of Team #109.

‘I would like to get the opportunity that James McManus has this year (racing in the World SSP300) and I am prepared to work hard,’ he says.

Both father and son are very much in agreement that this season with the Team#109 machine will be a learning curve. It’s also likely to be very busy due to being involved in both championships, albeit on different weekends.

While Jeff’s father Glynn looks after the bikes and is also his mentor, Kevin Keyes has helped out on track days.

Sponsorship is key to Jeff’s participation and with two different championships, it’s vital. In terms of the Young Gun Championship, Team #109’s gesture is more than appreciated. Others such as Bandon-based MK Paving and Building have sponsored Jeff’s helmet while Casey Castles, John O’Connell (Plasterer) and Don Atkinson Crash Repairs have assisted with the bike and leathers.

‘Don Atkinson Crash Repair are very good to us. Don paints the bike for us and also the fairings for the 109 bike, the ones that are on it are very sentimental as they were used when Kevin Keyes won races in the BSB with Team #109,’ Glynn says.

Quite often, such hidden costs are expensive. On average, one can expect to fork out €700 or more for a helmet. Custom-made leathers begin from €400. If kangaroo leather is chosen, that cost can quadruple. Airbag jackets cost in the region of €700, but that is seen as money well spent – the very second a rider falls off the jacket will inflate and protect the rider.

While the first outing in the ‘Young Gun Championship’ is pencilled in for the end of June, the exact dates of the ICM still have to be announced. No doubt, Jeff will be geared up for sure. Once the season starts, he will be on a double shift.