Cork forward Fiona Keating in action in the 2021 season.

RISING inter-county dual star Fiona Keating made a huge decision before a sliotar was pucked or a ball was kicked in 2021 – she decided to focus solely on camogie.

On a personal level, it was the right decision, she feels. The Courcey Rovers forward blossomed even more with Cork and was front and centre of the Rebels’ charge to the All-Ireland senior final. There was heartbreak there, though, as Galway won an epic final, 1-15 to 1-12, in September – but Keating’s journey was dotted with memorable moments.

A picture taken minutes after Cork’s thrilling semi-final victory over Kilkenny in late August shows Keating and Hannah Looney and Ciara O’Sullivan celebrating into the camera lens. The pure joy on the Cork players’ faces captures the importance of that win and what it meant to the entire Cork camogie panel.

That moment, and beating Kilkenny to reach an All-Ireland final, was Keating’s personal highlight.

‘That was my first time playing in Croke Park and Cork won a huge game where we were considered underdogs,’ Keating said.

‘We knew we were going well in training. We were focused on ourselves and blocking out everything that was being said about us. You can see from that picture what that victory meant to the entire Cork senior panel. I mean, when the final whistle went, that crowd, just being in Croke Park, it was so special.

‘One of the main reasons Cork did so well, in my opinion, is because of the friendships and bonds that were formed within that team. It is a young Cork team, and I am probably one of the younger members.

‘We bridged the gap between the older and younger players on the 2021 panel. This year, I could have sat next to any member of the Cork camogie panel on a bus, or a train and it wouldn’t have made a difference. Everyone made the effort to get to know each other and you could talk to anyone about anything. For example, I was nearly afraid to say hi to Hannah Looney whereas this year, she is one of the girls I would be closest to.’

Unfortunately, there would be no fairy-tale ending. Galway proved too strong in the All-Ireland decider and took the title despite a mammoth Cork effort. From the highs of ousting Kilkenny to the lows of losing out to Galway, Keating experienced a full gamut of emotions.

‘I am still not over that All-Ireland final,’ the Cork player admitted.

‘It was my first All-Ireland in Croke Park. We got our individual (video) clips a couple of weeks after. It took me a long time to come around to even watch those. It is hard to lose at that final step. It really is. We were going so well, I thought we had it in us. When it came to the final, Galway were that bit more physical but that is something every player is working on for the year to come. Bridging that physical gap will be vital and something we are addressing.’

The last two years have been unchartered territory for everyone and Keating is no different. Education-wise, the 20-year-old changed courses and is now studying her first year of Sports Studies and Physical Education in UCC.

‘Well, firstly, the 2020 season was a weird one because everything started much later due to Covid-19,’ Keating admitted.

‘Looking ahead to 2021, I just felt I couldn’t give my all to both. I felt if I focused on one sport maybe I would get somewhere. That’s when I decided to focus fully on my Cork camogie career. It worked out for me, which I am delighted with, as it was a risk.

‘Don’t get me wrong, it was an incredibly hard decision to make at the time. Looking back now though, I am happy that I made it.

‘As inter-county level, sometimes it can be very hard to balance the two. I was missing one Cork football and camogie training session per week by trying to commit to both. So, I just wanted to give my all to one. I am happy that I did.’

By focusing exclusively on camogie, Keating also benefited from some much-needed rest and the opportunity to clear up long-term niggling injuries.

‘We were training three nights a week with the Cork senior camogie panel and going to the gym one day a week as well,’ she explained.

‘That meant I was out four nights of the week without ever kicking a football. I was lucky I avoided any serious injuries over the past 12 months. I found the previous year, when I was still involved in football and camogie, that I was tired a lot more often too.

‘It meant I couldn’t give 100 percent at some training sessions because I was still tired from the night before. By focusing on camogie, I was always fresh going into training and benefited from that. Having a day’s rest before any match was a huge bonus too. That was a big factor in helping me avoid injuries in 2021.’ 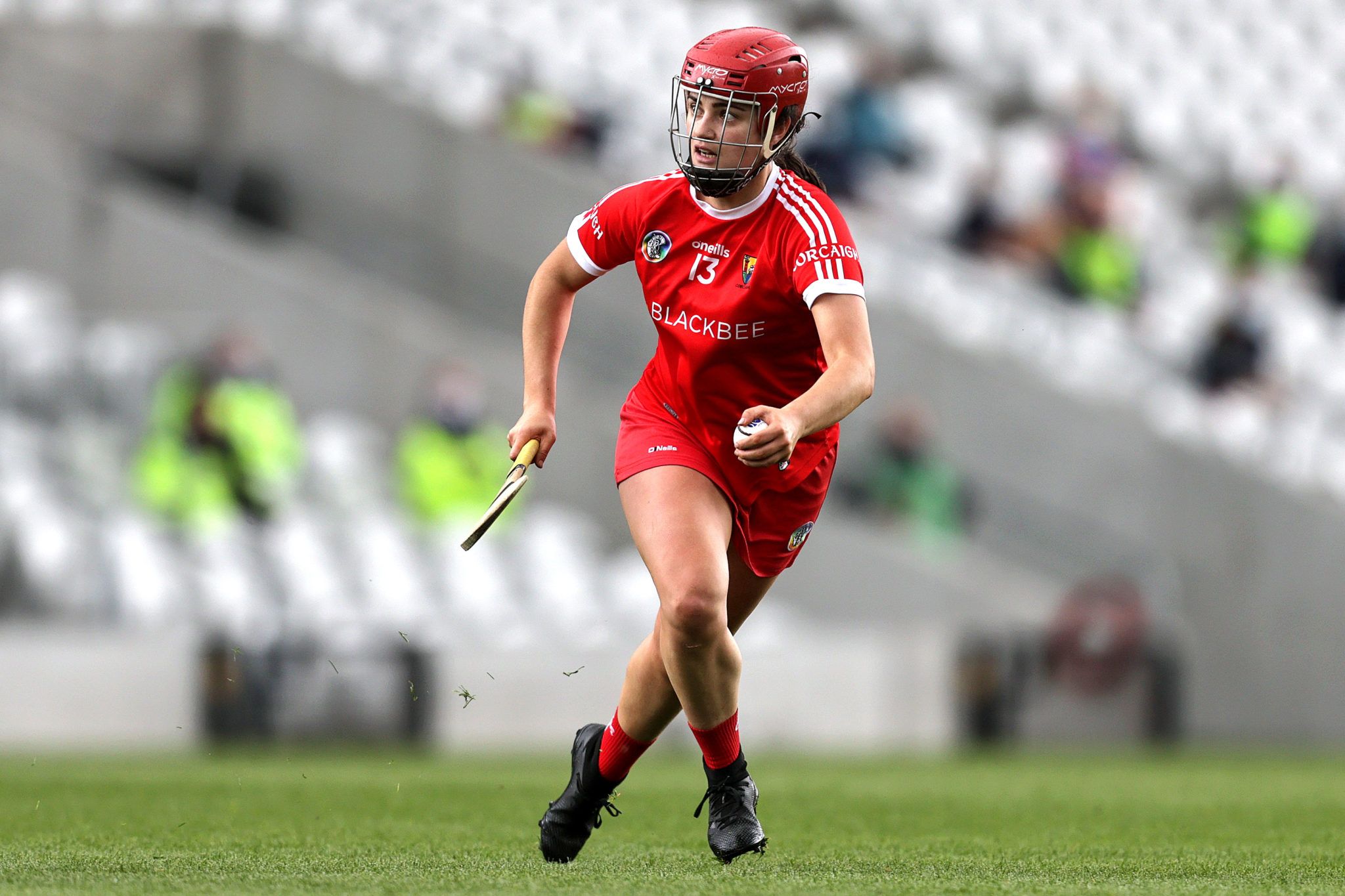 Fiona Keating impressed for Cork throughout the 2021 campaign.

Keating made her mark with the West Cork football division in winning an historic 2020 Cork LGFA county senior championship. West Cork were not involved in this past season’s championship but did that make life easier for the Courcey Rovers player?

‘Representing my division in the senior football championship was as important to me as playing at senior level for Courcey Rovers. I really missed training and playing with the West Cork girls this past year.

‘Playing in the senior championship improved me as a player. That’s because I was playing with the likes of Melissa Duggan, Áine Terry O’Sullivan, the Kielys, the list goes on. Getting to play with players of that quality has only improved me as a footballer and I missed out on that opportunity in 2021. Please God, we might see West Cork back in action soon once again.’

There was disappointment, too, with Courceys, as the 2020 county senior champions were dethroned in October, losing a semi-final to the Sars.

Keating’s form during Cork’s march to the All-Ireland camogie final underlines the value of being able to focus on one sport. The reality in 2021 is that modern-day dual players are finding it harder to make sufficient time to commit to both sports.

Clearly, the Courcey Rovers player is happy she made the choice she did at the beginning of the year. Keating still feels there is a place for dual players in the modern inter-county game provided fixtures can be accommodated. 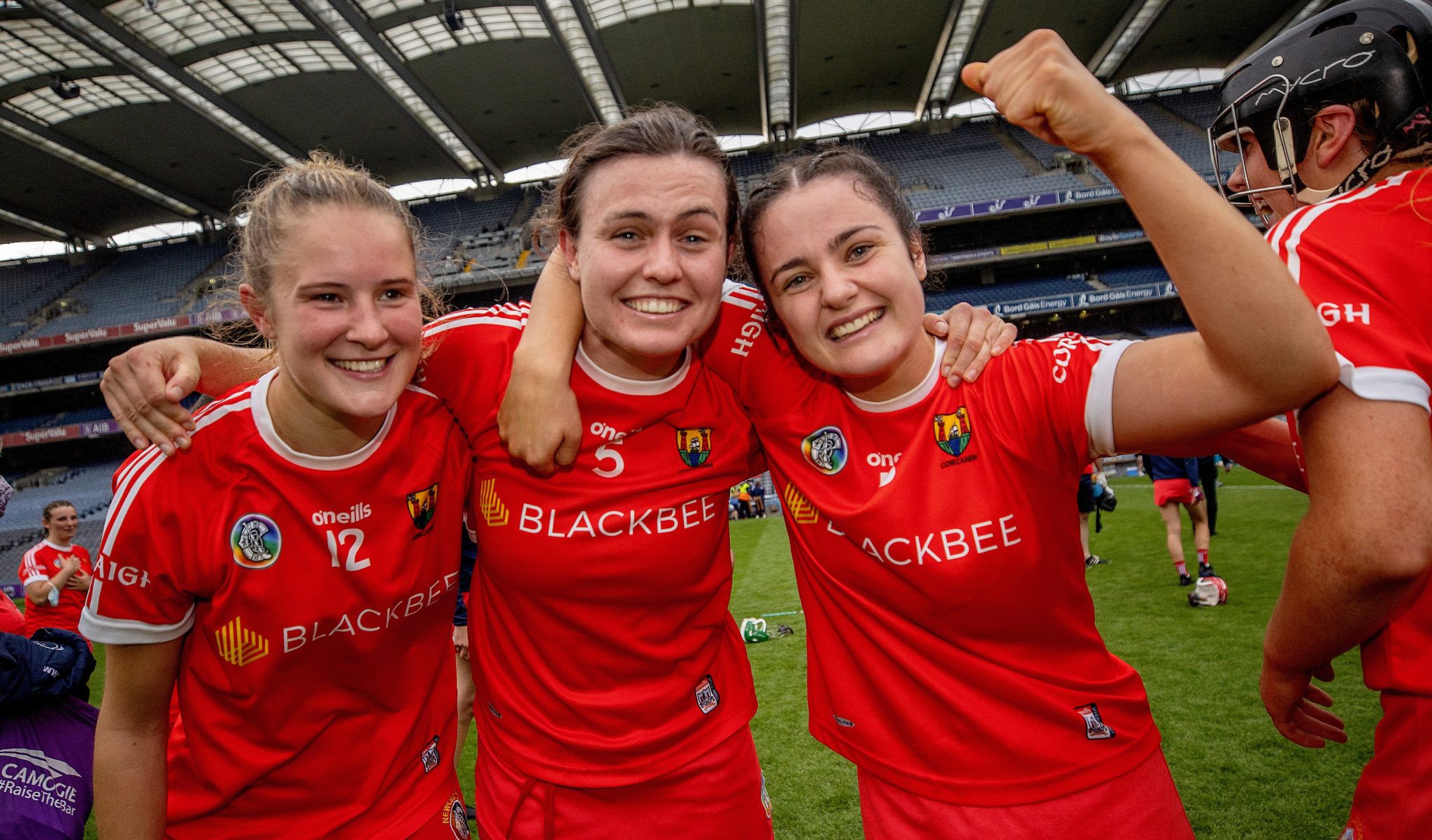 Ciara O'Sullivan, Hannah Looney and Fiona Keating celebrate the big win against Kilkenny in the 2021 All-Ireland semi-final at Croke Park.

‘I know what it’s like to put in all that time as well as the effort that goes into being a dual inter-county player which is why I have such respect for Hannah (Looney), Libby (Coppinger) and Meabh (Cahalane) and what they managed in 2021,’ Keating said.

‘The commitment is something else and you have to be really driven to do both. You must have good time management and just try to find a balance between everything.

‘There were still fixture clashes this past year, and last year, which makes things even more difficult. No doubt there will be a few more next year as well.

‘Definitely, it is becoming increasingly harder to be a dual inter-county player. For me, at the moment anyway, just focusing on the one (sport) is something I’ll be doing in 2022.

‘I would never rule it out, making a return to playing both again, sometime down the line.’