TWO West Cork clubs, Goleen and Randal Óg, will clash in the county junior B football final this Saturday in Páirc Uí Rinn, 3pm throw-in – and it promises to be a real thriller.

At present there are two county championships for junior B clubs. The first, featuring junior B divisional winners, dates back to 1984 and includes the second/third teams of big clubs as well as the smaller junior B clubs. Kilmeen were the original winners in 1984 and West Cork teams have done exceptionally well in winning that title, including Kilmeen, Argideen Rangers, Kilbrittain, Diarmuid Ó Mathúna, St Oliver Plunkett’s, Kilmacabea, St Colum’s, Barryroe, Muintir Bhaire, St Mary’s and Clann na nGael. Randal Óg were beaten finalists in 1999 and Goleen in 2019.

Then, in 2015, a second county championship solely for junior B teams was introduced and this is the final that will be played on Saturday. Kilmeen in 2015 and Argideen Rangers in 2017 brought the title back to West Cork but both Goleen and Randals will be seeking a first title in the championship.

This final is a real rubber match between Carbery’s only two junior B clubs, as they have met twice already this season in the South West junior B championship. In the first round on September 3rdthey went to extra time in Skibbereen before the Mizen men, who staged a great late rally, won by 2-9 to 0-10. Both teams later progressed to the final and this time Randals proved the superior side on the day, winning by 0-11 to 0-4. So now they step up another rung on the ladder to decide which side will progress to junior A for 2022.

In 2016 Goleen were actually campaigning in the county junior C football championship and won the county title when beating Abbey Rovers by 1-13 to 3-5. A number of that team will be still involved on Saturday, looking for their second county medal.

In Round 1 of the championship, Goleen received a walkover from Kilbrin and thenbeat Doneraile in the quarter-final on September 25thby 2-14 to 1-11. Semi-final opponents were Deel Rovers last weekend and by the tightest of margins, 1-8 to 0-10, Goleen won through to the county final on Saturday.

Goleen will again look to the ageless John Cullinane for inspiration once again in this final, while Darren O’Donovan has been providing the bulk of the scoring for a long time now and he will provide the chief threat to the Randals’ defence. Jack O’Driscoll and the Sheehans will backbone the defence while Dan O’Driscoll will look to break even at midfield. Padraig Reidy, Tadhg Cullinane and Patrick Scully will be the main supports to O’Donovan and John Cullinane in attack. Coach Pat Connolly, the former Ilen Rovers’ star, will have Goleen in peak form for this outing. 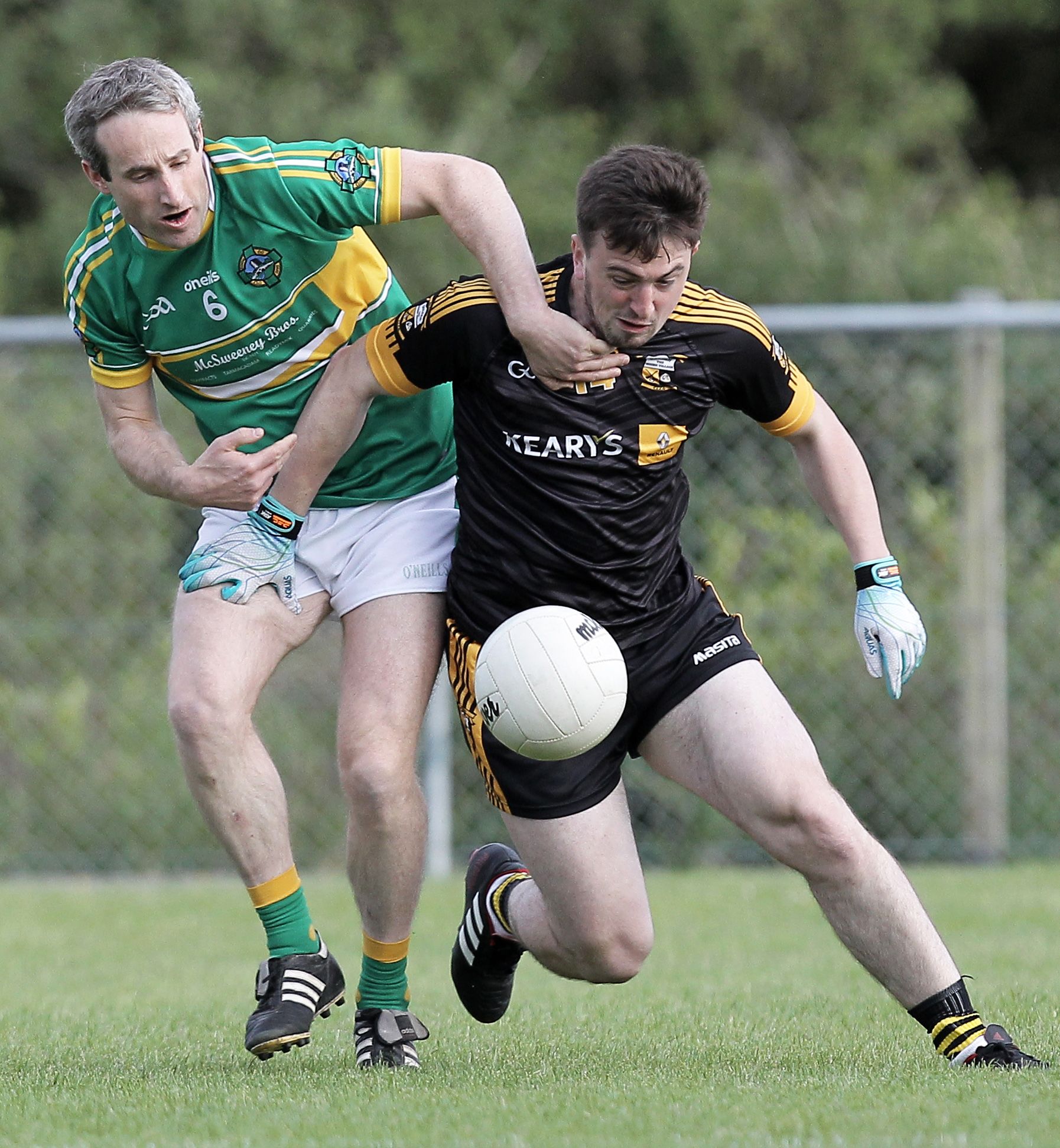 Goleen's Darren O'Donovan in action against Randal Óg's Shane Patterson in a previous meeting between the two Carbery clubs who clash in this Saturday's county junior B football final.

Randal Óg have been one of the busiest dual clubs in the county since the start of the present season in July. They have hardly seen an idle weekend, trying to finish the 2020 championships as well as progressing the 2021 championships. Last season they won the Carbery B hurling title and followed this season with the B football title.

Coach to the Randals’ team is Dave Aherne of Bandon, who enjoyed a lot of success with the Lilywhites and got roped in by a friend to help out with Randals last year.

‘It’s been a busy season, alright, but it’s been a blessing in a way as the players love playing games every weekend, with only light training in between. In my time it was 25 training sessions to every match and I’d love to be playing now,’ Aherne said.

Randals and Goleen are no strangers to each other, being the only junior B clubs in the division but familiarity doesn’t breed contempt.

‘The players know each other very well now, having met so often over the past few seasons,’ said Aherne. ‘I’ve only been involved since last season, so that rivalry doesn’t bother me. We also have a good few young players new to championship and they don’t carry any baggage.

‘We got a good awakening from Goleen in the Carbery championship. We were cruising to a win when they hit us with a blitz. That taught us a good lesson, so we were ready when we met them in the final. That game went exceptionally well for us.’

Randals won Round 1 of the county championship on August 20thwhen they accounted for Deel Rovers by 1-11 to 0-6. In the quarter-final, they were convincing winners over Abbey Rovers, winning by 3-14 to 1-3 on October 17th. Semi-final opponents were Beara side, Garnish, and this was a hard-fought win, 2-12 to 1-10 on October 30th.

Randals are particularly strong in the middle of the pitch with Donncha and Peter Collins providing pace and finishing, while Seamus Crowley, Ian Crowley and Shane Patterson backbone a solid defence. In attack, Seadhna Crowley, Conor O’Neill and, particularly, Sean Daly, form a lethal partnership.

Either way, the county B cup will be coming back through Bandon on Saturday evening.