EOGHAN Barry is rowing faster now than ever before – but he’s not content with that, he wants more.

That won’t surprise those who know him. He has high targets to reach, rowing internationally for Ireland being one, and he’s determined to get there.

Eoghan is a remarkable young man. He was born with upper limb deficiency on his right-hand side where his arm stops a couple of inches below his elbow – but that hasn’t held him back.

Instead, the inspirational 16-year-old from Lisheen, the same parish as 2016 Olympic heroes Gary and Paul O’Donovan, is leaving no stone unturned in his quest to row faster.

Back in the summer of 2018, Eoghan rowed his first competitive race for Skibbereen Rowing Club at a regatta in Fermoy. That was a breakthrough moment.

An incredible amount of work went on in the background to get Eoghan to that particular stage because developing a prosthetic arm to allow him row has always been a challenge.

It’s been a journey of trial and error, of constant tweaks and upgrades – and it’s involved countless rolls of sticky tape to keep the attachments in place.

Creating a rowing arm that won’t break, like others have in the past, and that also allow Eoghan to ‘feather’ – the action where the rower, after pulling the oar out of the water, rotates the oar handle 90 degrees so it runs parallel to the water – has always posed a problem.

Because his arm stops just below his elbow, he’s never had the wrist movement he needs to feather the oar. It meant the oar would slap off the top of the water, slowing him down. He wasn’t on a level playing field with rowers he was racing against.

Eoghan took another step forward recently when he appeared on the RTÉ series, Big Little Fix, a show that challenges a group of leading designers, engineers, computer programmers and technology experts to create inventions that will transform people’s lives.

Dr David McKeown was tasked with creating a rowing arm and a system for Eoghan's boat that would allow the Skibbereen rower compete.

The end result: a titanium attachment to a prosthetic arm that allows Eoghan feather the oar. That’s progress.

‘It’s made a big difference. It’s not 100 per cent yet, but we’re getting closer,’ Eoghan explains.

‘The attachment is spot on. My right oar can feather now, so automatically it’s more streamlined and I can row better and faster.

‘I feel I am moving some bit fast.’ 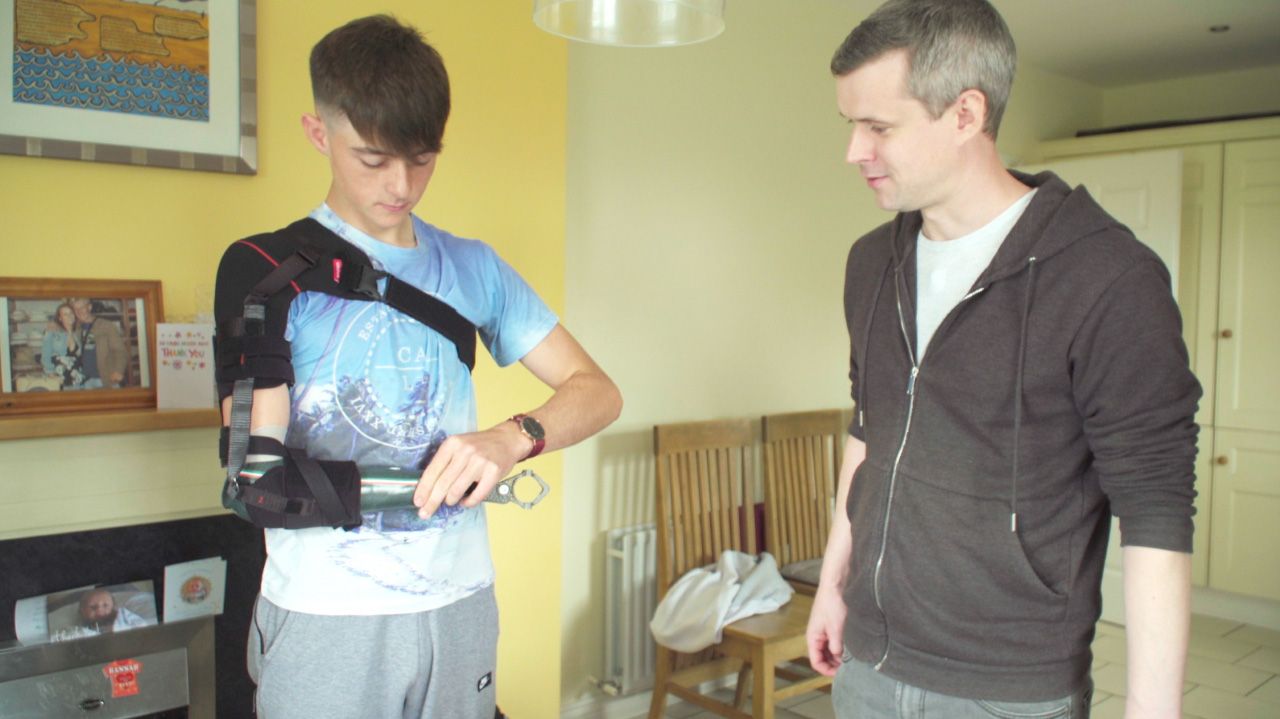 Dr David McKeown has continued on the great work undertaken locally in the past few years, with Eoghan’s rowing coaches Mike Cotter and Richie Keating, and Tadhg Collins at the forefront of the efforts to help Eoghan. It’s been a community effort long before the TV show came on the scene.

‘I don’t think I am too far away from where I want to be, to be honest,’ Eoghan explained.

‘Now it’s just to get the strapping right more than anything else, that’s the big thing.’

The strapping has always been an issue. It’s what holds the rowing arm in place. Before Big Little Fix came along, the strapping Eoghan used left him in pain.

The strapping cut into his back, leaving him with weeping sores.

‘It would leave blisters on my shoulder blade and the strap would be rubbing off it with every stroke so it was piercing and you couldn’t physically row with it,’ Eoghan said.

‘I could row for three weeks straight but I had to stop for a week and go on the bike to let it heal.’

The strapping with the new rowing arm and attachment is another step forward. Again, Eoghan is a lot closer to where he wants to be.

The next step is to get out on the water and really test his new attachment, but all Skibbereen rowers are off the water at the moment due to the Covid-19 outbreak so Eoghan will have to wait a little longer. The coronavirus pandemic will also stop Eoghan racing in Ghent in May as part of a Skibbereen four.

Time is on his side though, and now he has a better chance of fulfilling his potential.

‘I’d love to represent Ireland, and row at the Paralympics, I suppose,’ Eoghan said.

Living around him at home are a number of the world’s elite rowers. On the same road is Shane O’Driscoll, a former world lightweight champion. Not too far away is the home of Gary and Paul O’Donovan, the latter a four-time world champion, and Eoghan has high ambitions too.

Given his commitment and dedication, and seeing how far he has come so far, you wouldn’t bet against him.