Eileen Rose McDaid pictured with her family - sons Kevin and Mark and husband Eddie- in the grounds of Wake Forest University in USA where Mark is in college.

EILEEN Rose McDaid has never regretted her decision to turn down the lure of professional golf.

In the mid 1990s the option was there. The Skibbereen woman was the best Irish women’s golfer of that era after winning three Irish Women’s Close Championship titles in six years (1990, ’92 and ’95). She also played on the Great Britain and Ireland team at the 1994 Curtis Cup in Tennessee.

McDaid was at the top of her game and the next step was to turn professional – but she opted against it.

‘I did think about turning pro but realistically I would have had to go to America to make a decent living,’ she explains.

‘It was always something I had in my mind but at the time the money wasn’t great on the European Ladies Tour and you couldn’t make a proper living from it. The only option really was to go to America, travel all around the place and try to scratch out a living. I didn’t want to do that.

‘I was getting married around that time and I felt it wouldn’t be a good life if you wanted to start a family as well so I decided not to turn pro.’

It’s a decision she’s still happy with. She had a good job with the Bank of Ireland and enjoyed the best of both worlds – the support and time off to play in tournaments while knowing there was also a salary at the end of the month.

‘Golf was still a sport, it was enjoyable, and I wasn’t sweating over a three-foot putt that could have decided my next week’s wage,’ explains McDaid, who now lives in Kilkenny. 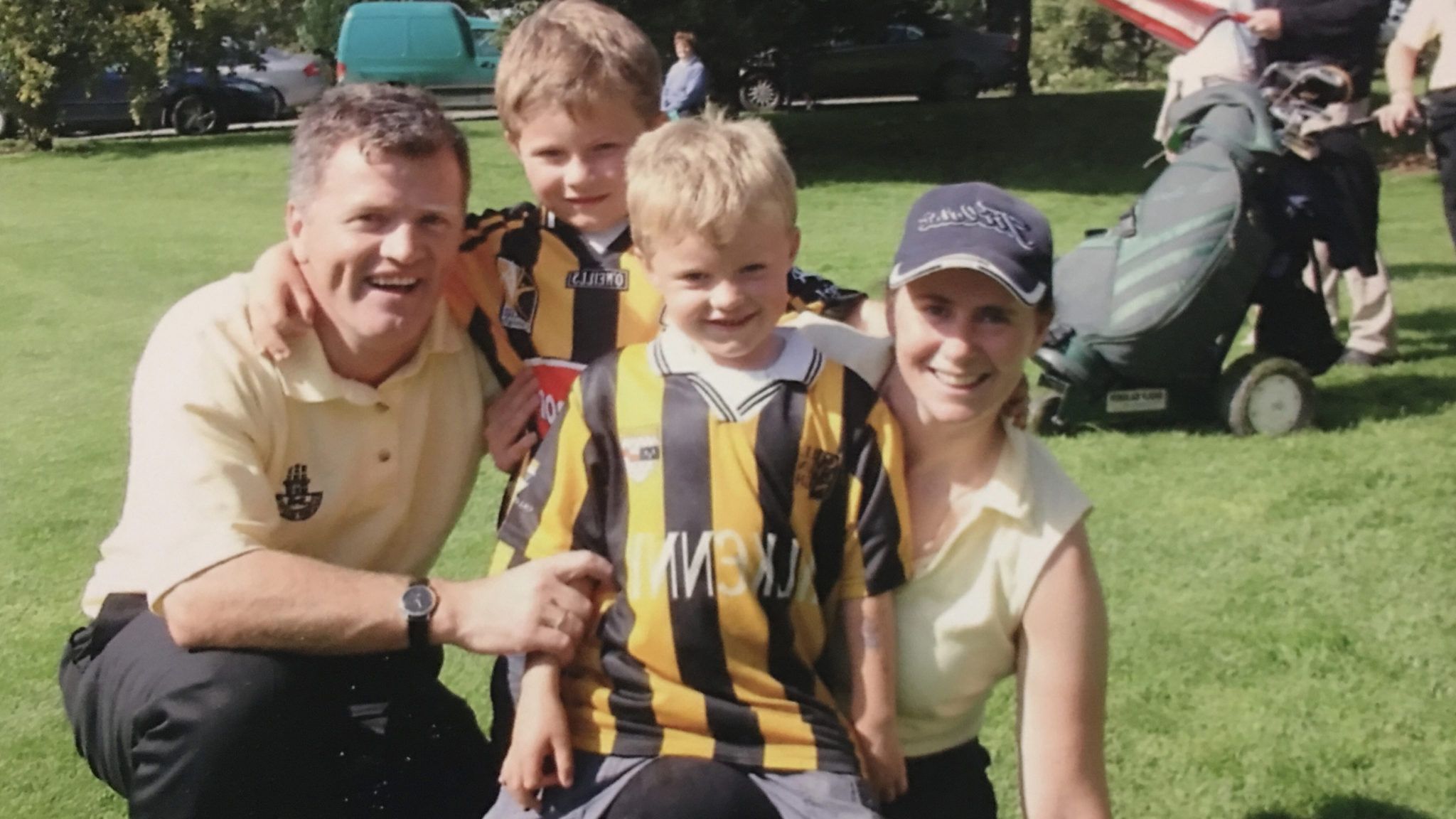 Eileen Rose McDaid pictured with her husband Eddie and sons Mark and Kevin after she won the All-Ireland Senior Cup in 2009 with Kilkenny Golf Club.

As a golfer, her game was incredibly strong. Hence the success. Modestly, she describes her game as ‘steady’, but it was much more than that. She could hit the ball a long way, but wasn’t wild and, nine times out of ten, found the fairway. Her temperament was key, too; she never swayed too much up or down.

‘My dad used to caddy for me a lot and I loved that; I felt he was a good influence,’ McDaid explains, and it’s from her parents and brothers that her love of golf developed.

She was just six weeks old in 1966 when her family swapped Letterkenny for Skibbereen, as her father, Dr Kevin McDaid, started a job in the West Cork town. The family made the move and lived out the Baltimore Road. Her father enjoyed golf, while her mother Eileen played for Ireland in 1959 and also played on Connacht and Munster teams. Her three brothers – Brendan, Kevin junior and Paul – were all keen golfers, too.

‘I was surrounded by golf so it was a natural progression for me,’ she explains.

‘My brothers used to play in tournaments, like the Munster Boys and all of those, and I would tag along. I’d be watching it, enjoying it and I got involved too. We spent a lot of time on the course in Skibbereen Golf Club so that’s how I got into it.

‘Another big thing is that we also had a mobile home in Lahinch and when we went there on holidays we played a lot as well.’

Her talent was obvious very early on. In 1983 she won the Irish Girls’ Close Championship in Ennis – that was a breakthrough moment.

‘I was only 16 years old and any time you win an Irish title you feel that you are going in the right direction,’ she says.

‘Also, there was an Irish U21 team and I got picked on that when I was 16. I was always playing with people who were older than me and I was striving to be as good as them as well. You are always trying to get on to the next step on the ladder.’

McDaid quickly climbed that ladder. Honing her talent at Skibbereen Golf Club – ‘it’s such a friendly club and the ladies there always helped and encouraged me, and they took a big interest when I was playing tournaments’ – she soon snaffled up numerous titles all over Munster and beyond. Her reputation was growing and she was setting her sights high from the start.

‘When I first made the Munster U18 team I was 14 years old and I really enjoyed the team aspect. Then when you win you want to get more and you want to get better. The pinnacle of amateur women’s golf is to make the Curtis Cup team – that’s a Great Britain and Ireland (GB&I) team – so I was always striving towards that,’ McDaid explains.

In 1994 the Skibb golfer was selected on the Great Britain and Ireland team that played America on The Honors Course in Chattanooga, Tennessee. She conquered her Everest. The teams finished level, on nine points apiece, and GB&I, as defending champions, retained the trophy.

‘It was always my goal so it was rewarding to get there,’ she says.

‘That was my first time to go to America, never mind my first time to play golf in America. All my brothers came over and it was lovely that they came to watch me play when you think that I grew up watching them play. Brendan was a professional at that stage and he was coaching me as well. It was great to have that support.’

Another huge support is her husband Eddie Power, also an iconic figure in Irish golf. He was a three-time men’s Irish Close champion. Together, they were the perfect match. When they married in Skibbereen in February 1992 it made page four of The Southern Star. ‘Top golfers wed in Skibbereen,’ the headline said. On and off the course, she made headlines, and just as she developed a love for golf from her parents, her sons – Kevin and Mark – are now carrying on the family tradition.

Mark is rated as one of the top young golfers in the country and has been named on the Great Britain & Ireland team that will take on America in the Walker Cup next week in Florida. Kinsale golfer John Murphy is also on that team.

‘For me, the Curtis Cup was the highlight and the Walker Cup is the men’s equivalent so we’re very proud of Mark,’ she says, and she still plays too, though more for enjoyment these days. 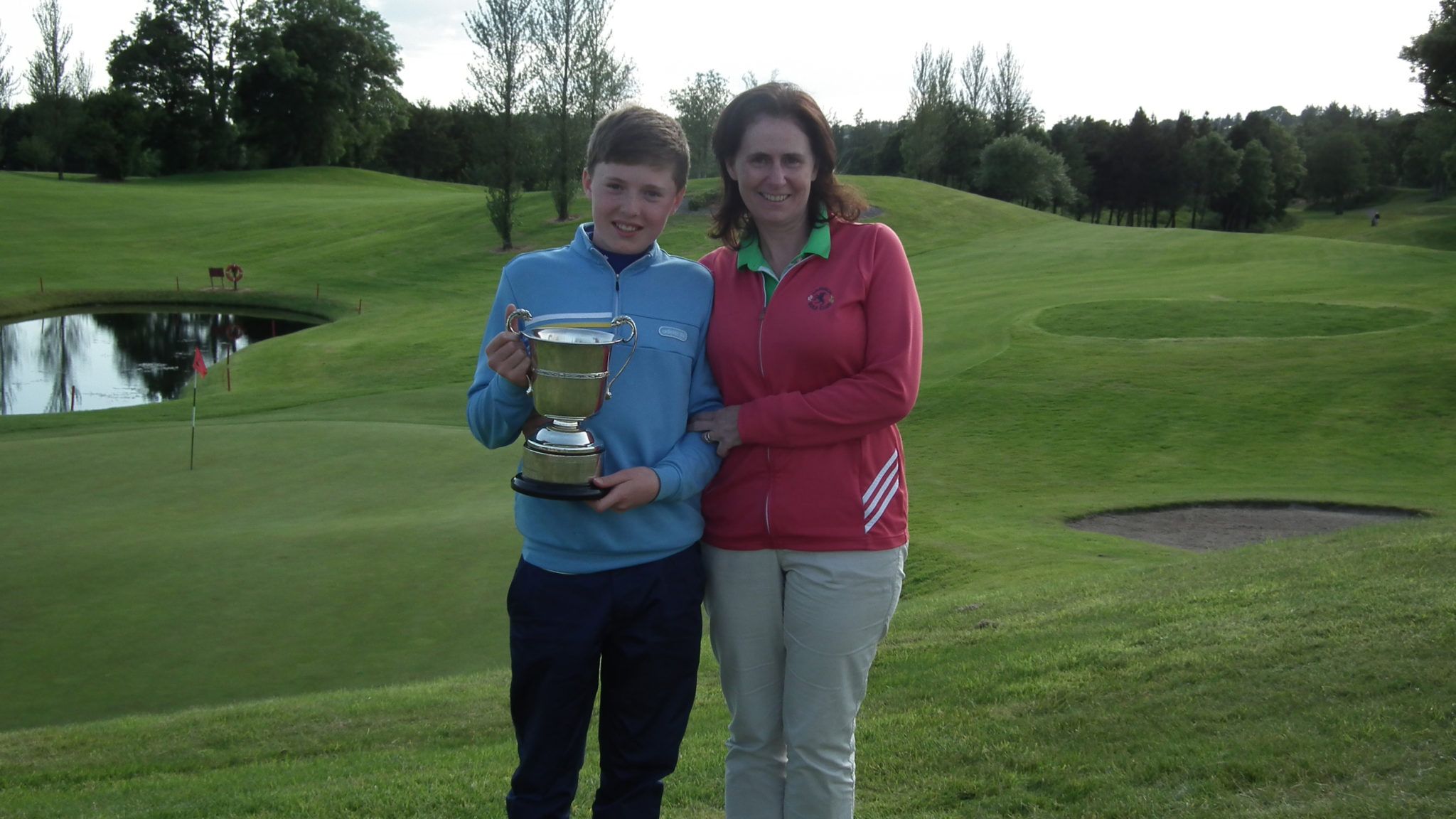 Eileen Rose McDaid with her son Mark after he won his first boys' championship - the Connacht Boys U15 Championship - when he was 12 years old.

‘I try and play once or twice a week at our club, Kilkenny Golf Club. If I was in Lahinch I would probably play a bit more.

‘I stopped playing there for a few years because I had frozen shoulders (a condition that affects your shoulder joint). I got frozen shoulder in one and it went into the other so I stopped playing for a bit, but when I got over that I went back playing. It’s mainly very casual these days, but I still play on the Kilkenny GC Senior Cup team so that is one thing I would be gearing up for.’

In 2009 McDaid led the Kilkenny club to the Senior Cup title, showing she has lost none of the skill and talent that took the Skibb woman right to the top of Irish women’s golf. She can look back on her career knowing she achieved her targets and goals. That brings a great sense of fulfilment. She came, she saw and she conquered.