Preparations: Drinagh Rangers' Legends' Vincie Collins, Robert O'Regan and Robert Jennings in action at a training session last weekend as they get ready to face the Liverpool Legends on Saturday, July 25th. 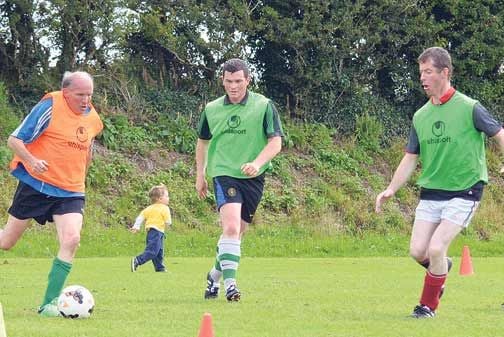 Preparations: Drinagh Rangers’ Legends’ Vincie Collins, Robert O’Regan and Robert Jennings in action at a training session last weekend as they get ready to face the Liverpool Legends on Saturday, July 25th.

FORMER Drinagh Rangers’ greats are flying home from as far away as America to take part in the upcoming charity match against Liverpool Legends on Saturday, July 25th (3pm kick-off).

It promises to be the biggest occasion in Drinagh Rangers’ 32-year history when they welcome the Liverpool Legends to Canon Crowley Park, and it’s fitting that a host of the club’s most famous sons will tog out on the day.

While Liverpool Legends can call on John Aldridge, Ronnie Whelan, Ray Houghton, Phil Babb, Jason McAteer, Alan Kennedy, Mike Marsh, Gary Gillespie and a host of other Reds’ giants, Drinagh Rangers have pulled out all the stops with their talented squad of 25 for this must-see match.

‘There are a couple of fellas coming home from America to take part. Paul O’Driscoll was the first captain of Drinagh back in 1983 and he’s coming home from San Francisco to play. Daniel O’Regan is home from Boston for the game as well,’ Don Hurley confirmed to The Southern Star.

Hurley is one third of Drinagh’s management team for the big occasion, along with Connie Curran, who has been involved with Drinagh since the start, and Declan Deasy. This trio is busy plotting the downfall of Liverpool’s European Cup and league winners – a task easier said than done, Hurley laughs.

Mike Doolan will captain the Drinagh team and the experienced striker will cause the Liverpool Legends’ no end of problems. He was a real handful for the Republic of Ireland Masters’ defence when starring for the West Cork League Masters in last summer’s charity match in Dunmanway.

Doolan is one of several current Drinagh Rangers’ Masters’ players who will be involved, along with JJ Hurley, who won seven West Cork League titles as a player, Robert O’Regan, Darragh Connolly, Alan Shorten, Dave Curran, Liam Curran, Denis O’Driscoll and Vincie Collins, who has been involved with the Masters’ league in West Cork since it started and he is also the oldest player currently playing in the Masters.

Other Drinagh Rangers Legends, who are befitting of the title, include Timmy Daly who scored in the 1990 Beamish Cup final, while David O’Regan played in the first Drinagh team back in 1983.

Another member of Drinagh Rangers’ first team that will take on the Liverpool Legends is Declan Deasy. He has been involved either as a player or joint manager in every season since ‘83 with Drinagh. Deasy has won four league titles as a player and seven as manager. A founding member of the club, James Walsh will also feature.

No stone has been left unturned to ensure that this will be a weekend to remember, with a number of the Liverpool Legends’ squad to take part in a golf classic in Skibbereen Golf Club on Friday, July 24th, before a road bowling exhibition on the morning of the game, hosted by Drinagh Bowling Club, as well as Mike Marsh’s coaching exhibition (see separate story).

The designated charity on the day is Cancer Connect.