IT may have been late November and under lights on a Monday night but this Bandon Co-op junior C/D football championship final in Dunmanway served up a highly enjoyable hour for the large attendance.

Clon entered this final as favourites in light of performances in earlier rounds but at stake was the Dullea Cup, which commemorates a great Doheny GAA family – and the Dunmanway men were determined not to let it go easily.

In truth, they were the better side in this final, their mix of youth and experience working extremely well. Clon, on the other hand, seemed over-balanced with veteran players who gave their all but found Dohenys’ pace and mobility just a little too much to handle.

Dohenys also possessed more scorers in their ranks than Clon, who seemed to rely too heavily on the talented Jonathan Leahy for their scores. There was hardly a kick of a ball between the sides all through, the biggest gap being two points, until Stephen Collins kicked a third insurance point for the winners, who led by two at half time, in the 60th minute. 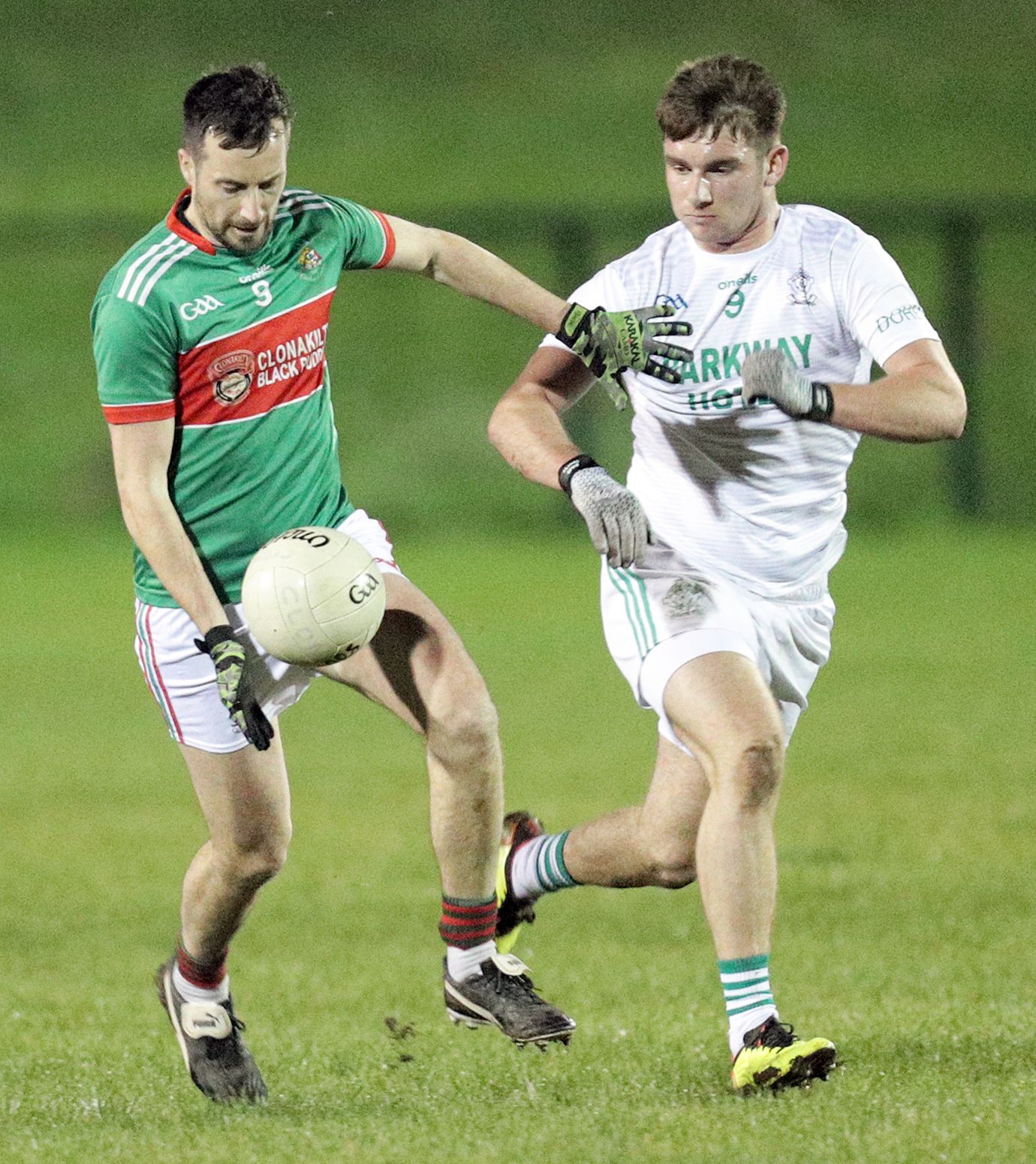 ‘We put in a long year with this bunch of players in the B and C grades,’ said a delighted Doheny mentor Kevin Crowley.

‘We played 21 games and most of these lads were subs on the B team that reached the South West final. We got a good run in this championship. We beat Mathúnas and then we caught St Colum’s with a last-minute goal down here in the bottom pitch. In the semi-final we had a good win, by a point, over Ross so we were building up nicely for tonight.

‘Clon came in as favourites but I think we were the better team on the night. Aaron Mannix at midfield is a serious young prospect and Dara O’Connor at centre back. Two young lads playing soccer and rugby all year and we got them back for this. Hopefully, we can hold onto them now for next season.

‘We started last February in the league above in Newcestown and 21 games later we’re taking home some silverware. We can relax now and celebrate for Christmas.’

It was Dohenys who got off to the better start in this final, with midfielder Aaron Mannix, a talented Cork City soccer player, quickly getting a firm grip in the middle and full forward Johnny Hurley causing problems in front of the Clon goal. Points from Hurley, Mannix (free) and lively centre back Dara O’Connor had the home side three to the good before Clon settled. With the Lyons brothers, Ger O’Donovan, Aidan McCarthy, Denis Murphy, Dave O’Regan and Noel Griffin to the fore, the red and green were level with points from the classy Jonathan Leahy (free and play) and Timmy Anglin (mark) by the 17th minute.

A great save by James O’Brien in the Clon goal from Johnny Hurley led to Aaron Mannix’s point from a 45 but Clon levelled again through Leahy, free. We had a really good contest now and it was Dohenys who finished the half stronger with points from Mannix (free), whose kicking of dead balls was superb, Denis Healy and Dara Kelly (free). Clon’s only reply was another Leahy free as Dohenys led by 0-7 to 0-5 at the break.

With sub Aaron Griffin making an instant impression, Clon hit the ground running in the second half and two pointed frees from Colin O’Donovan plus one from play from Liam Knowles, had them in front.

However, Leahy had picked up an injury which clearly limited him and it was Dohenys who surged forward again, with Tom Murphy, Paul Deane, Noel Collins and Dara O’Connor prominent in defence, Mannix continuing to impress at midfield and Stephen Collins, Johnny Hurley, Dara Kelly and Denis Healy showing well in attack. Points from Mannix and Dec Dwyer shoved Dohenys in front and Leahy levelled it all up for the fourth time, 0-9 each, as the last quarter dawned.

It was Dohenys who were looking livelier as both sides went all out for victory and their defence was proving very hard to break down. At the other end, Hurley and Collins were causing lots of problems and the scores came from Hurley, who blasted over the crossbar from close range, Collins (2), and Kelly (free), with Clon managing only a single point from Leahy.

It finished 0-13 to 0-10, with genuine delight as Martina Burns, PRO Carbery Board, presented the Dullea Cup to Doheny captain, Noel Collins.