MAEVE O’Neill has to pause for a moment when she is asked to select her highlight from the past year.

It’s not a straightforward decision. It’s a packed shortlist, but then she settles on one.

‘It was definitely the European U20 Championships in the summer,’ the 17-year-old athlete says.

‘That was an amazing experience, I loved every minute of it. Getting to the semi-finals in my own race was amazing and then being on the relay team and getting to the final was such a bonus,’ she adds, looking back on those championships in Tallinn, Estonia in July.

In her favourite 800 metres the Doheny AC teenager qualified for the European semi-finals. Maeve was also on the Ireland women’s 4x400m relay team – along with Lauren McCourt (Bandon AC) – that finished fifth in the final and set a new national U20 record of 3.37.39. Incredible memories – and that gets the number one vote as her 2021 highlight.

Or Maeve could also have selected breaking Sonia O’Sullivan’s 34-year-old 800m record at the South Munster Schools Track and Field Championships during the summer. Maeve smashed O’Sullivan’s time, taking almost seven seconds off the record that had stood since 1987.

Or the Ballinacarriga teenager could have picked her 800m PB run (2:06.40) when she raced at an U18 European meet in Paris in late July.

Or the MICC Dunmanway fifth-year student could have championed winning the 800m gold medal at the national junior championships in June.

Or magic Maeve could have opted for her 400m and 800m double at the All-Ireland U18 championships in August. 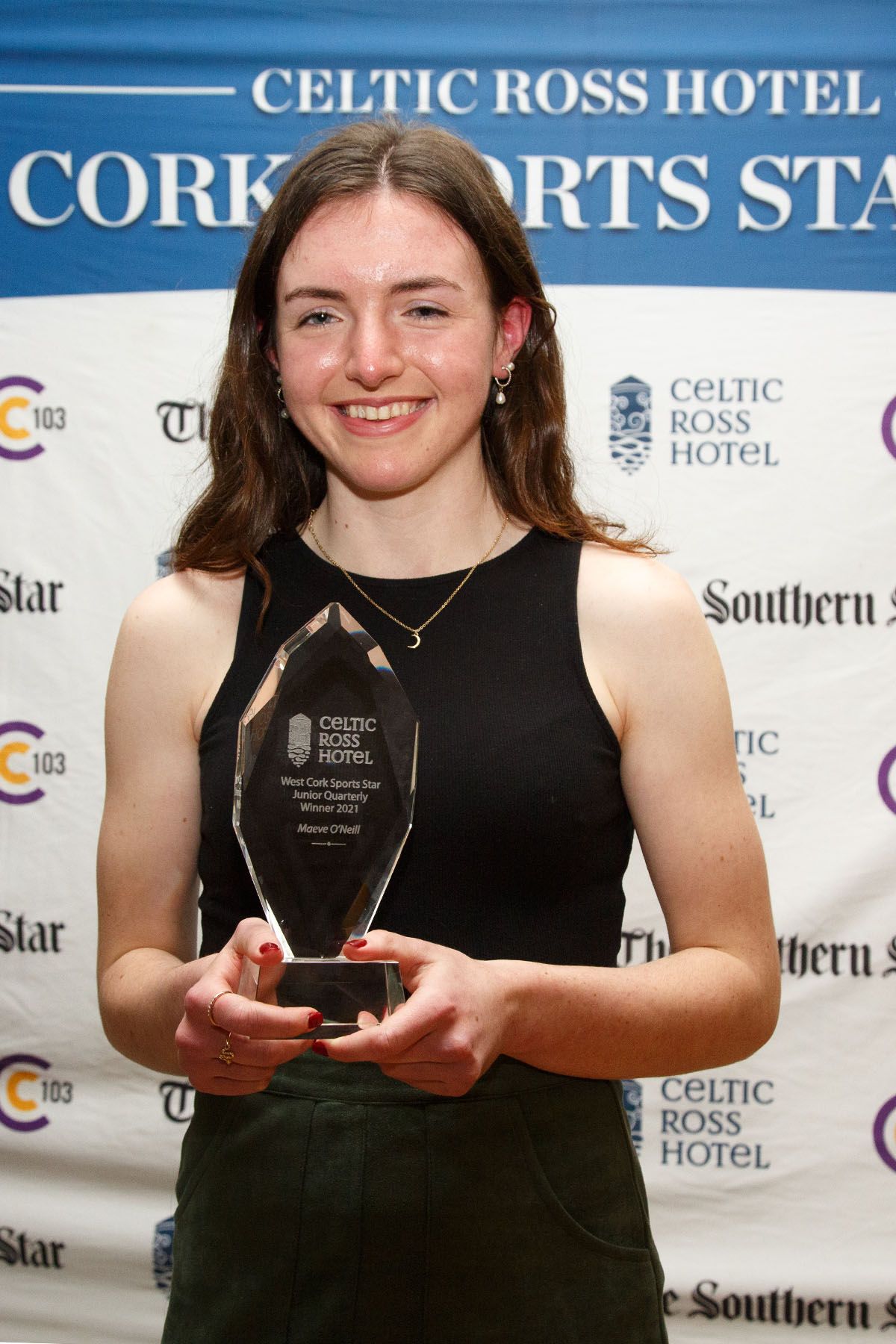 They are some of the many highlights of a memorable year for one of West Cork’s most promising young athletes who is enjoying life in the fast lane. Perhaps it’s no surprise that Maeve is in the headlines. Athletics is in her DNA. Her mom, Anna, was a top runner in her heyday, even representing Ireland at the first European cross-country championships in 1994. Like mother, like daughter. And while now it’s Maeve’s turn to take the spotlight, Anna is playing her role, as is Maeve’s dad, Tony.

‘I’m coached at home, mainly by my dad, but I run with my mom sometimes and I love that; she’s a big inspiration to me,’ says Maeve, who was presented with a Celtic Ross Hotel West Cork Sports Star Youth quarterly award in recognition of her impressive form and medal haul this year.

‘All my siblings ran at some stage but they all stopped and I kept going!’ she adds – and that was a wise decision. The good news is there is more to come in the years ahead.

‘We try not to focus on competitions as targets. Instead, we just look to keep improving and keep going on the same path that I am on. It would be great to get down closer to two minutes flat for the 800m over the next while; that’s going to take time but I’m going in the right direction,’ Maeve explains.

She’s in her winter block of training now and is preparing for the indoor season in early 2022 when she hopes to build on her success and fast times of 2021. There’s a lot more to come.