AS omens go, it’s a good one. Otherwise, it’s a useless fact. We’re plumping for the former. Conor Hourihane was born in 1991, the Year of the Ram, and he has just signed for Derby County, whose club nickname is the Rams.

Sticking to that theme, even the Bandon man feels fate played a role in his latest move. Out for a bite to eat with his family, they bumped into new Derby boss Liam Rosenior. Hourihane’s kids decided to get involved in his search for a new club.

‘Being a free agent, I was out for lunch in a restaurant with my wife and two kids and Liam so happened to be in there as a little bit of fate. We got talking for five or ten minutes after my kids ran up to his table and caused a bit of noise. Low and behold weeks later I’m here so maybe there was a little bit of fate in that,’ Hourihane says.

Whether or not this latest move was written in the stars, it’s the right move for Hourihane (31) at this stage in his career.

He had a whirlwind rise through the leagues, from the fourth tier in England to the Premier League in five seasons. He put himself on the map with Plymouth Argyle in League Two. Became a cult hero with Barnsley after his exploits in League One and the Championship. Then helped fire Aston Villa to Premier League promotion in 2019. Hourihane hit the big time: the boy from Bandon was a Premier League footballer. Signed a new three-year deal that summer, too. In that 2019/20 season, he made 27 Premier League appearances and scored three goals. But that was as good as it got.

The last two seasons seemed to have slipped by. With opportunities limited at Villa, he spent huge chunks of the last two campaigns on loan with Swansea City and then Sheffield United, both in the Championship. It didn’t go exactly to plan, despite a red-hot start to his Swansea loan. So when his Villa contract ran out this summer Hourihane was a free agent and had a choice to make. There were suitors. He’s a Republic of Ireland international (35 caps) with a magical left foot who has lit up the leagues in past years. He’s also a midfielder with an eye for goal and assists – 82 goals in 483 career games is an impressive return. 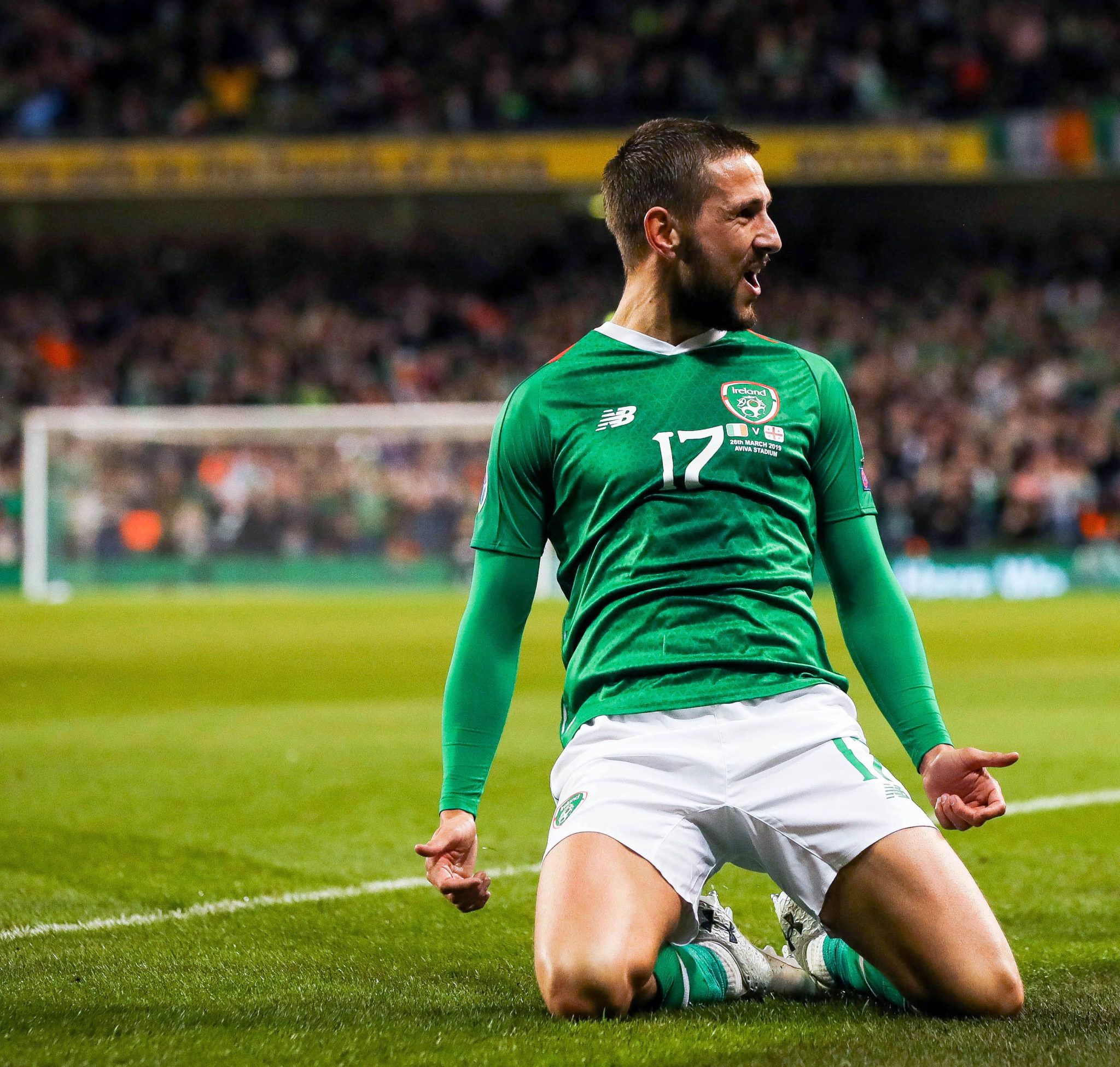 Conor Hourihane celebrates scoring for Ireland against Georgia in 2019.

In his 2014/15 season with Barnsley in League One he scored 13 goals and had 14 assists. The following season in the same league he netted ten goals and 12 assists. He has the talent, experience and attitude to make a difference at this level. Look at the games he’s played in: Premier League, play-off finals, play-off semi-finals, cup finals. He made an impact before and he can again. That’s good news for Derby County, already rated as one of the favourites for League One promotion next season. They’ve signed the ultimate pro. The secret to his success? Work hard. First into training, last out.

‘That’s my secret – I always think that hard work gets you the rewards,’ he says.

Derby know signing Hourihane is a coup. A natural born leader, he is the man to pull the strings in their midfield and orchestrate a promotion push, but it works both ways.

After loan spells the last two seasons, now the West Cork man has certainty. He signed a two-year deal. This is a chance for him to show us all what he can do and why Aston Villa chased his signature in January 2017. It’s at a level where he can shine. He’s 31 now so will want to play regularly while in his prime years. Hourihane will get his chance at Derby and regular game time will also keep him relevant at international level too. He knows that. If he wants to stay in Stephen Kenny’s plans he needs to play. He needs to rediscover the form that saw his star rise. Remember his match-winning free kick against Georgia in 2019? That was his Ireland high point.

He has slipped from a starter under Martin O’Neill to a squad player under Kenny, and Hourihane knows he needs to play at club level to keep his place in the Ireland squad.

He has a knack of proving his doubters wrong.

‘People have written me off at all the levels I’ve played at, even at League Two and League One and then stepping up to the Championship,’ he told The Shropshire Star in 2020. ‘There are always people who have looked and thought: “I’m not so sure about him”. Proving people wrong is just something I have liked to do.’

It’s time to prove the doubters wrong again, and that there’s more to this success story.