GOALS win games and goals were also worth their weight in gold in the appalling weather conditions that prevailed in Skibbereen last Saturday week for the first semi-final of the Bandon Co-op JAFC.

Driving wind and heavy rain prevailed for the entire game and once again full forward Eugene Daly, who has made a habit of scoring goals this season, delivered for Tadhg MacCarthaigh on the double.

The first goal came in the 20th minute as the Caheragh men played against the elements and it helped his side to be level at the break. The second goal came in the 45th minute as MacCarthaighs struggled to transfer their dominance into scores, being only a point in front at the time. There was to be no catching the winners following that score.

‘We saw Ross playing against St James and we knew how good they were with their mixture of seniors and good young lads,’ Tadhg MacCarthaigh manager Gene O’Driscoll told The Southern Star.

‘We had decided to play with the wind if we won the toss but they did instead. We knew they would have to get up a score in the first half so we worked very hard to stop that. Eugene’s goal was vital, it’s his first season on the team and he has scored five goals in three games. We were level at half time but we knew we would have to get scores on the board in the second half.’ 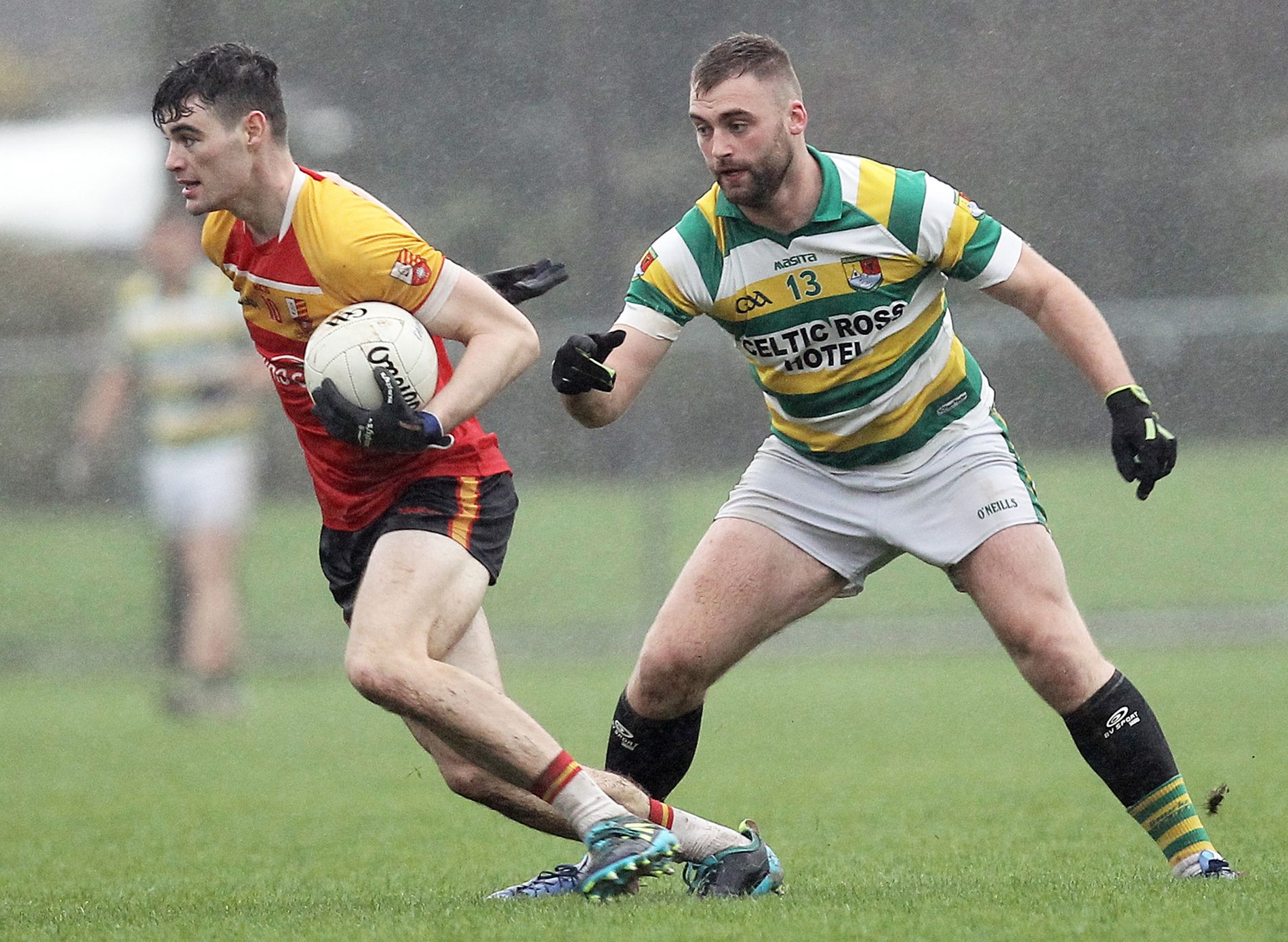 Coincidentally, last season Tadhg MacCarthaigh were beaten by Kilmacabea in the semi-final in similar weather conditions in Dunmanway and they had learned their lesson well from that defeat. Against the wind and rain, they used Colm O’Driscoll as a very effective sweeper and with his brothers, Brian and Kevin, having the upper hand at midfield in the first quarter, they held the Ross men to a two-point advantage, 0-4 to 0-2, by the first water break. Timmy O’Donoghue, Colm O’Mahony and Pa Hurley (two frees) kicked points for Rangers while Brian O’Driscoll and Paddy Burke answered for MacCarthaighs.

The vital first goal came in the 20th minute, just when Rangers’ Michael Mennis and Brian Hodnett were beginning to get a grip at midfield. Colm O’Driscoll broke through the Rangers’ defence and his shot rattled back off the crossbar. Eugene Daly reacted fastest to the rebound to shake the rain off the Rangers’ net. Tadhg MacCarthaigh were now in front against the elements but not for long as Pa Hurley levelled from a free.

Rangers’ fortunes suffered another blow two minutes later when effective centre back Stephen O’Donoghue was injured and black-carded in the same incident Tadhg MacCarthaigh took the lead again with a Charlie McCarthy point. Even though Hurley again levelled from another free before half time, 1-3 to 0-6, MacCarthaighs were in the driving seat as the drenched players retired to the comfort of the now-allowed dressing rooms.

‘The third quarter was tough. They missed some good chances, hit the crossbar and then we got our second goal. It was crucial, just coming on the water break,’ said Gene O’Driscoll. 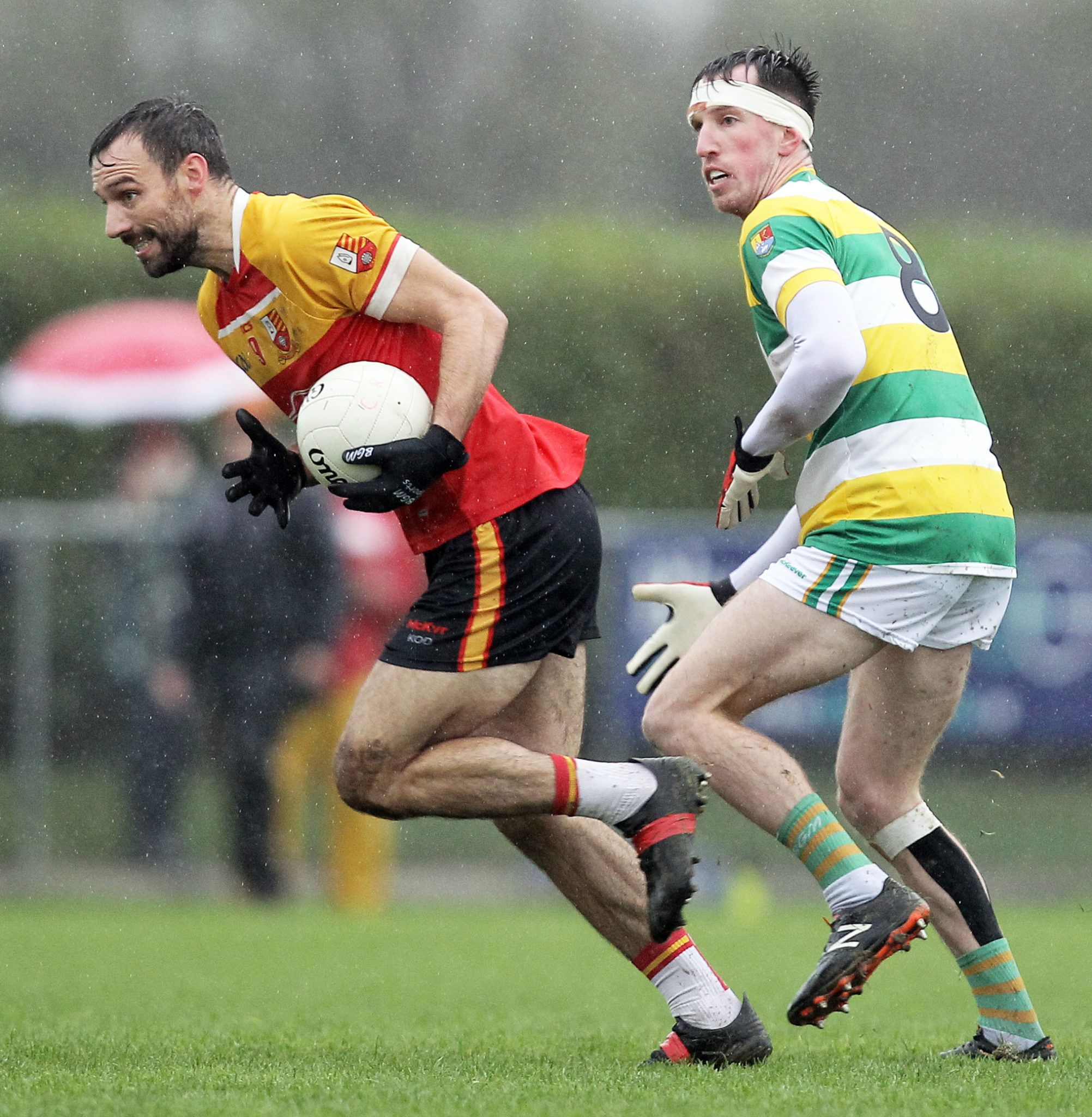 Any notions MacCarthaighs might have had of the elements being enough to guide them to victory were dispelled by a Rangers’ outfit that came out battling in the second half. With Michael O’Donovan, Peter Óg Hill, John O’Brien, Mennis and Hodnett defending well, MacCarthaighs were limited to a single point in the third quarter from a Brian O’Driscoll free, but Rangers missed a few clear chances of scores, including a shot that came off the crossbar.

Then came the second vital goal when Eugene Daly availed of a defence-splitting pass from Michael O’Donovan to kick his second goal on the stroke of the second water break. It couldn’t have come at a more opportune time as the Caheragh men led by four, 2-4 to 0-6, turning in to the last quarter.

As the rain lashed down, the final quarter turned into a perseverance test and a tough, hard battle. Brendan Herlihy, Kevin O’Regan, Killian Murray and Dan Kingston starred in defence for the winners, the O’Driscoll brothers continued their big influence on proceedings and, up front, Sean McCarthy, Charlie McCarthy and Paddy Burke were lively and effective. For Rangers, Pa Hurley, Ciaran Calnan, Timmy O’Donoghue and, especially, Ciaran Santry, tried to close the gap on the scoreboard but the fact that Rangers were confined to three points from play over the full hour shows how tight-marking the MacCarthaigh’s defence was. Charlie McCarthy (free) swapped points with Timmy O’Donoghue as did Sean McCarthy with Pa Hurley (free), but it was the winners who finished stronger with scores from Gavin O’Neill and Charlie McCarthy.