CORK will put their Munster U20 football crown on the line when they venture across the county bounds and into enemy territory next Monday.

The young Rebels travel to Austin Stack Park in Tralee to take on Kerry in this year’s provincial U20 football decider (7.30pm throw-in).

Cork’s last U20 victory on Kerry soil in this competition was back in the 2016 final when Cian Dorgan scored an injury-time match winner (3-9 to 1-14). Since then, Cork have lost the 2018 and 2020 finals in Tralee, but this year’s Rebels will hope to reverse the recent trend.

When the teams met in the John Kerins Cup in February, Kerry won on Cork soil with a bit to spare, 3-16 to 0-13, so new U20 boss Bobbie O’Dwyer is well aware of the challenge ahead on Monday night.

‘Kerry gave us a trimming about two months ago and gave us a great lesson in football, so we know what we are up against,’ the Urhan man told The Southern Star.

‘We know this Kerry team reasonably well, we would have come across them over the years at underage levels. They are a hard-working side, quite a defensive outfit but when they get the opportunity to score, they are well able to score. We’re looking forward to the challenge.’ 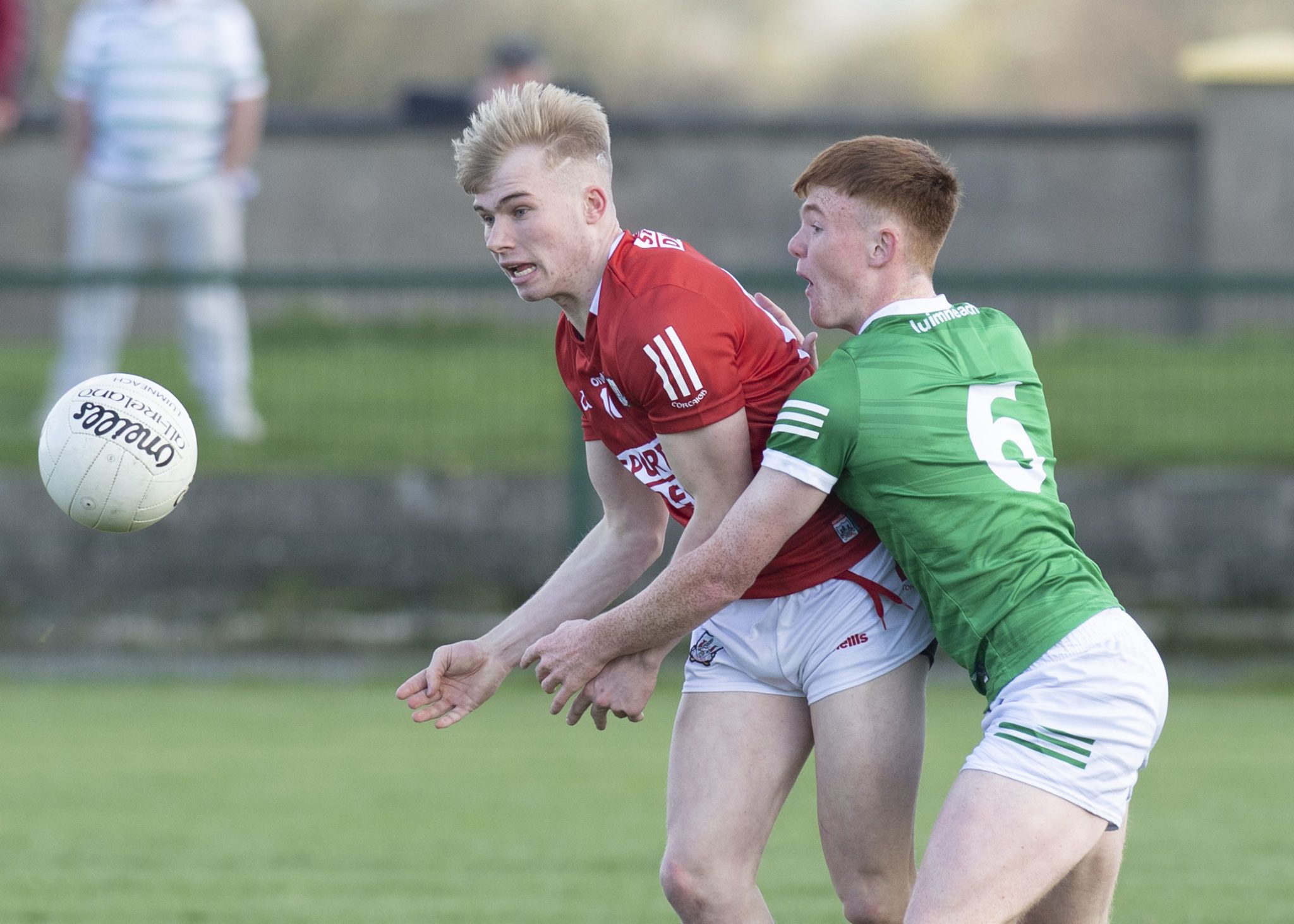 Newcestown clubman Richie O’Sullivan gets his pass away despite the close attention of Limerick’s Aaron Neville during the Munster U20 FC semi-final at Ballyagran, Co. Limerick. (Photo: Martin Walsh)

While Cork made light work of Limerick in their semi-final on Monday, winning 2-15 to 0-5, with Barryroe’s Ryan O’Donovan shooting 1-7, Kerry were made to scrap for their 1-11 to 0-8 away victory against Clare. In both games, Cork and Kerry turned the screw in the second half to get the results they wanted.

‘I was very pleased with the performance against Limerick. The hard work was done in the first half when we were playing into a strong breeze and we were two points up at half time,’ O’Dwyer explained.

‘We were able to suss out what they were about and our two goals at the start of the second half saw out the game for us.

‘Defensively I thought we were strong. Offensively, we took some good scores. A couple of times, our decision-making to get the ball into the scoring zone … we need to work on that. There are other areas we need to work on too, and that’s why this game was important because it gives us a good sense of where we are at.’

With only six days between the semi-finals and the Munster final, O’Dwyer’s immediate target is making sure his Rebels are fresh for the trip to Kerry.

‘With the short turnaround it depends on what you’re looking for. Every game is different. Some teams, you might be chasing their kick-out and going very aggressively. With some teams you might feel you have a chance of improving your transition or looking at your defensive set-up, but in six days it’s all about keeping the lads fresh. Tactically, you set up slightly differently for every team you play against so it’s about keeping them as fresh as you can,’ O’Dwyer explained.

Cork and Kerry have shared the last six Munster U20 football titles with Cork winning in 2016, 2019 and 2021, while Kerry took home titles in 2017, 2018 and 2020. Both counties have also won this particular championship 28 times each, so on and off the field there is little to separate the two. Kerry have home advantage on Monday, which will work in their favour, but Cork are primed for the challenge and ready to surprise the locals across the county bounds.