The county-winning Clonakilty football team marching to glory ahead of the 1996 final against UCC.

1996 CORK SFC winner Eoin O’Mahony sees plenty of similarities between the challenges he faced in overcoming UCC and what this year’s Clonakilty side will come against when they take on St Finbarr’s this Sunday (Páirc Uí Chaoimh, 3pm).

Before we start, a confession. Eoin O’Mahony was one of my favourite Clonakilty footballers when I was growing up. His ability to float over frees or long-range points from open play, irrespective of the angle, made him an instant hit in a lot of young supporters’ eyes.

For me, it was O’Mahony’s ability to rifle a shot into the roof of the net and give the opposing goalkeeper little time to get out of the way let alone attempt a save is what elevated the supremely talented forward above all other Clonakilty players in the late 1980s and early 1990s.

O’Mahony’s medal-haul further underlines his talent. Munster and All-Ireland inter-county minor successes in 1981, Munster U21 success in 1982, a Munster senior medal in 1983, Munster and National League senior medals in 1989. That same year, under Billy Morgan, O’Mahony was on the bench for Cork’s 1989 All-Ireland final victory over Mayo.

O’Mahony’s controversial transfer to Nemo Rangers resulted in a county senior medal in 1988 and All-Ireland senior club medal in 1989 with the Capwell club. His personal tally of 1-8 in that All-Ireland club decider has only ever been matched by the late Mick McCarthy and Dubin senior’s Diarmuid Connolly.

I, along with all the club’s supporters was heartbroken at news of his transfer but relieved when Eoin O’Mahony returned to play for Clonakilty towards the end of his career. O’Mahony’s return helped end the club’s 44-year drought for a county title and became one of the highest points of his long playing career.

Eoin’s sons, Barry and Jack, have gone on to wear the famous red and green jersey, representing Clonakilty at senior level. Jack has featured prominently in the Clon full-forward line throughout the Brewery Town’s run to this year’s county final and is likely to be a key player against the Barr’s. On the same afternoon, Barry and Jack’s father will walk out the tunnel with the team mates that lifted the Andy Scannell cup at Páirc Uí Chaoimh 25 years before. It will be a poignant moment.

‘It was a big shock to everyone that we won the county in 1996,’ Eoin O’Mahony told The Southern Star.

‘We were written off more than the lads playing St Finbarr’s are in this year’s final. Championship is funny though, the more you start winning the more you get on a roll. Five of the Clon starters against UCC (in 1996) were aged over 33. That’s a third of the team which was unusual.

‘I didn’t know much about the college (UCC) apart from maybe Mark O’Sullivan. Seamus Moynihan was only starting out and Eamonn Fitzmaurice was there too. I’d say the moment we knew we were on to something was the night we shocked Ballincollig in Newcestown (in the second round). We had a bit of work done before we met Duhallow and got over the line there as well.

‘We were haunted against the Barr’s in the semi-final considering we had to play three-quarter of the match with fourteen players after Brian Murphy was sent off. I was taking the frees that day and had a 45’ to level it up near the end. It dropped short because I didn’t get under it enough but Padraigh Griffin got a hold of it and scored a goal. It was the same for (Terry) Dillon’s goal in the final, I didn’t get under the free that led to his goal either. I’ll claim them as assists, real ‘training ground routines’ they were (laughs)!’

Unlike his Clonakilty team-mates, Eoin O’Mahony was living and working in Cork at the time of that 1996 success. Yet no one could not have anticipated the outpouring of emotion immediately after the final whistle or the subsequent weeks and months of celebrations that followed.

‘I was living in Cork and wasn’t around for a lot of it,’ O’Mahony admitted.

‘My lads were only young then so I was only getting down to Clon for training and heading straight back up. We had previously lost a county final to Nemo Rangers in 1983 having played poorly and were unlucky against the Barr’s in the 1985 county. 1996 marked 44 years since Clonakilty had last won it. I suppose, for anyone living in Clon and who was in their 60s or 70s, 1996 was a ferocious win. Anyone younger wouldn’t have witnessed anything like that before either so the celebrations were understandable.’ 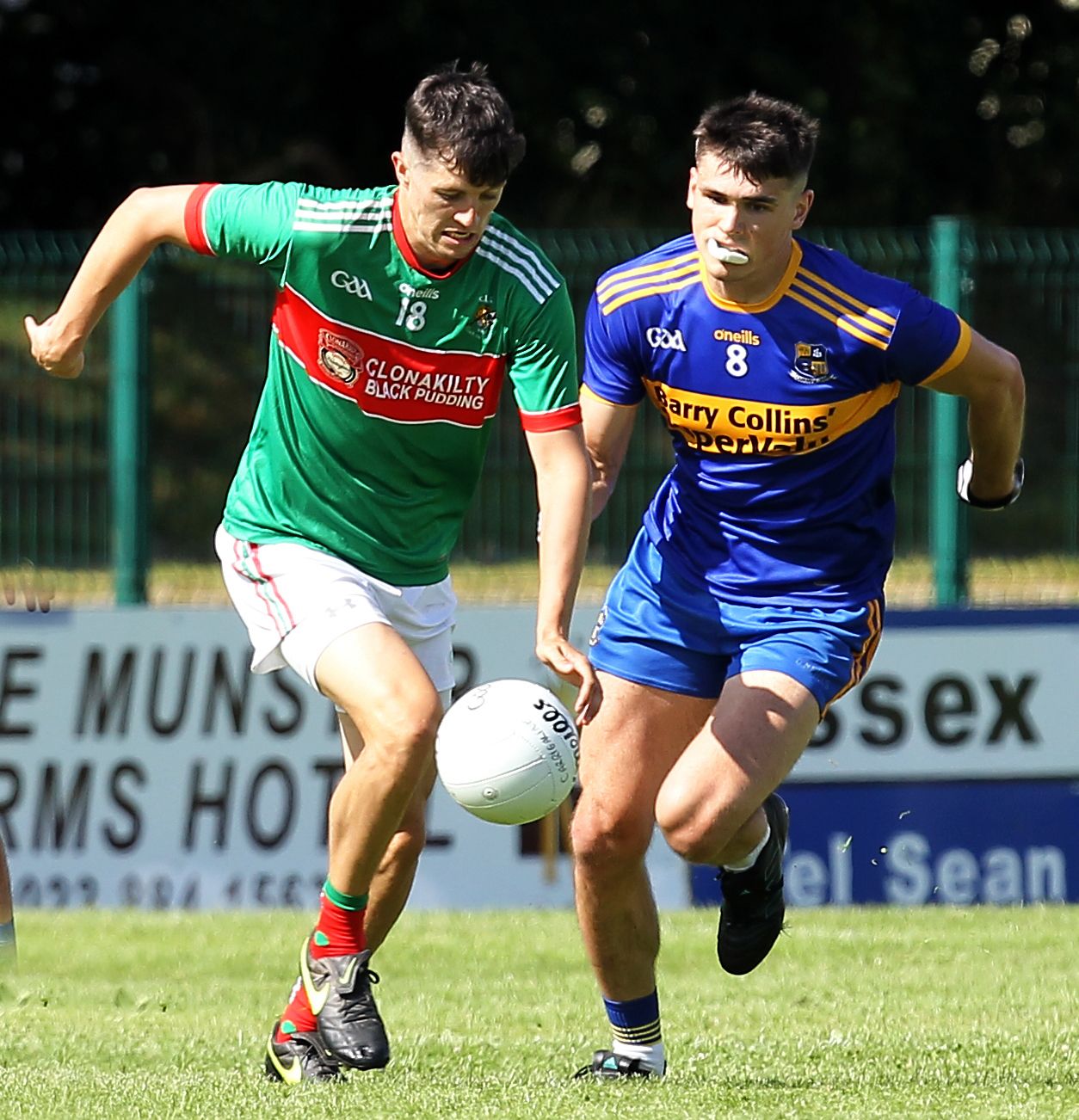 Following on from the 1996 heroics, seeing his two sons graduate to the Clonakilty senior ranks represented another proud moment for Eoin O’Mahony and his family.

‘Ah yeah, sure you love to see them involved alright,’ the former inter-county forward said.

‘It is a massive achievement to get to a county final and a great honour to walk out on to the Páirc Uí Chaoimh, for every one of them. Nowadays, I am not too bad at watching. I kind of sit back, within reason (laughs). When this Clonakilty senior team was very young, I would have coached them at U12 and then they passed on up into the U14s and U16s.

‘This group would have been quite successful at underage even though Thomas (Clancy) crew lost a U16 county final. We won a Minor Premier 2 county with the likes of Jack and Sean White involved. If you compare it to 1996, Casey (O’Donovan, Liam O’Donovan’s father), Billy (Crowley) and myself had never won a single football medal with Clonakilty during our careers until that year. The only thing we ever won underage was a West Cork U16A Premier hurling championship.

‘I first started playing in the senior championship in 1979 so it was 17 years before I got a football medal with Clonakilty and that was against UCC in the 1996 senior county final.’

This weekend, Clonakilty faces a similarly formidable challenge to their 1996 counterparts. St. Finbarr’s are the form team of the 2021 championship and it is going to take something special to beat them.

‘I am sure Haulie will have a plan,’ O’Mahony concluded.

‘It was a breath of fresh air to watch Clonakilty playing (Douglas) the last day. They had a different game plan against Duhallow but it worked. Space seems to open up an awful lot more in Páirc Uí Chaoimh compared to when you are playing on smaller, tighter pitches.

‘Páirc Uí Chaoimh seems to suit Clonakilty. Jesus, you’d be praying they will do well. It would be great for us to win as it would keep the 12 or 13 year cycle going of 1996, 2009 and 2021 county championships. Three county titles in 25 years would be a good return.’