IN 1983 and 1985, Clonakilty lost two county finals, against Nemo and the Barrs, but between 1985 and 1995, they won only two games in the county senior championship.

So poor was their form in losing to championship newcomers, RTC, in 1995, that the demand for the team to re-grade to intermediate was beginning to gather serious momentum. However, a senior tradition that dated back to 1932 could not be easily broken and it was the players themselves who convened a special meeting early in 1996 and decided to give the senior championship one more serious go.

Nobody in their right minds at that stage could have envisaged that a gap of 44 years stretching back to the last tile in 1952, could be bridged.

Paddy Barrett, an outstanding Limerick senior footballer in the 1970s, 80s and 90s arrived in West Cork to work in Ballineen in 1986. He decided to throw in his lot with Clon seniors to keep up his form for the Limerick senior team. Little did he realise how poorly timed that move was.

‘Unfortunately, my success with Clon amounted to winning two championship games in ten years and with Limerick, I managed to play in a Munster final against Kerry,’ Barrett told The Southern Star.

‘I did get a run with the Irish team, and that was good. At the end of 1995 there were lots of calls for the Clon team to re-grade to intermediate and to tell the truth the players were disgusted. We knew we were not achieving but we didn’t think we were that bad. The players actually felt insulted at the suggestion. It was Mike ‘Haulie’ O’Neill and ‘Casey’ O’Donovan who took the bull by the horns and got the players together to read the riot act. It was decided to make one super effort to address the situation.’

Clon’s first outing in the championship in 1996 certainly didn’t inspire confidence as they scraped past city division Seandún by a single point, 0-7 to 1-3. Another blow-in, Mark Naughton, was the saviour that day with five points but it was far from inspiring stuff. There was a huge improvement for the second round against Ballincollig. Goals from ‘Casey’ and Brendan Walsh led to a 2-8 to 1-9 victory and for the first time in ten years the team had won back-to-back matches in the championship.

The success-starved supporters were now beginning to get behind the team and turned out in their droves for the quarter final against divisional side Duhallow, a 2-8 to 1-7 victory.

‘The main memory from that game was the goal scored by Tom Mannix,’ said Barrett. ‘Tom hit a rasper from 35 yards and it would have been the goal of the year only for Padraig in the semi-final.’

The Clonakilty team that won the 1996 Cork SFC final will be honoured at Páirc Uí Chaoimh on Sunday.

That semi-final was against St Finbarr’s – this Sunday’s Premier SFC final opponents – and a great effort by Clon as they led for 56 minutes seemed in vain as the Barr’s took the lead in the dying minutes. Then came a goal for the ages from young Padraig Griffin in the last minute. All bedlam broke loose among the supporters as they celebrated reaching the final for the first time since 1985.

‘I honestly though Padraig was stone mad to try for a goal,’ Barrett said. ‘We were a point down and he could have kicked an equalising point but he went for goal. My heart almost stopped but he got it at the second attempt and the crowd went berserk. It was mighty stuff.’

Queue the whole town going mad for weeks as Clon faced the final, looking for their first title in 44 years.

‘It was crazy stuff, the whole town got involved, went mad, the place covered in red and green. Amazing how quiet it is this season compared to then,’ Barrett said, with a hint of nostalgia for the days when the GAA was the town. ‘In fact, we did most of our training in Douglas, to get away from the mayhem and some of the players were students in Cork. We didn’t get bound up in the hype.’

Opponents were the students of UCC, who had won the Sigerson for the two previous years and had inter-county players all over the pitch, including Seamus Moynihan, Eamomm Fitzmaurice and Johnny Crowley from Kerry, as well as Mark O’Sullivan and Johnny Buckley from Cork. Also on the team were Ilen Rovers’ Chris Collins and Jason Whooley. Clon weren’t given a prayer of a chance by all the scribes and experts. 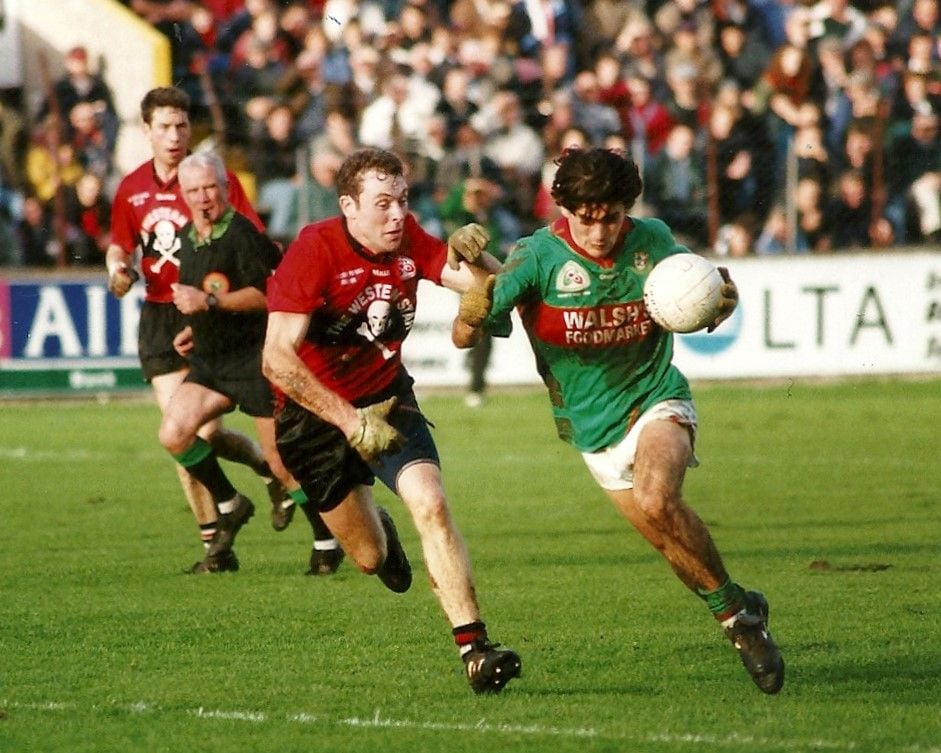 ‘We knew we were complete underdogs going into the game but it didn’t bother us as we had been underdogs in all our games in the championship,’ Barrett admitted.

‘It lashed rain all morning but that didn’t bother us, either, as we knew how fit we were and we really believed we were going up there with a good chance of a win. It probably looked dicey at half time as we trailed by a point having played with the elements but we knew we could play well against the wind as we had a good, running team. The defence was outstanding in that second half, the two Griffins, Eamonn Walsh, Diarmuid Cahill (Paddy was wing back) and when Terry got the goal early in the second half, we weren’t going to be beaten.’

In arrears at half time, 0-4 to 0-3, the golden goal arrived in the 36th minute when Terry Dillon fisted to the net and even though the College drew level in the 55th minute, there was no denying a flying Clon side and points from Eoin O’Mahony and Dillon had the supporters in ecstasy. It finished 1-9 to 0-10 and Clon, the complete underdogs, were champions, the eighth title landed after a gap of 44 years. There was no talk of relegation after that.

‘I remember the crowd bursting on to the pitch in their hundreds at the final whistle, absolute bedlam. It was incredible, never to be forgotten,’ said Barrett. ‘From no-hopers to heroes, just like Clon next Sunday. The reception home, the celebrating, amazing.’