Kilmeen's Cian McCarthy in action against O'Donovan Rossa's Joe Lynch during this year's Clona Milk U21 B football championship semi-final. 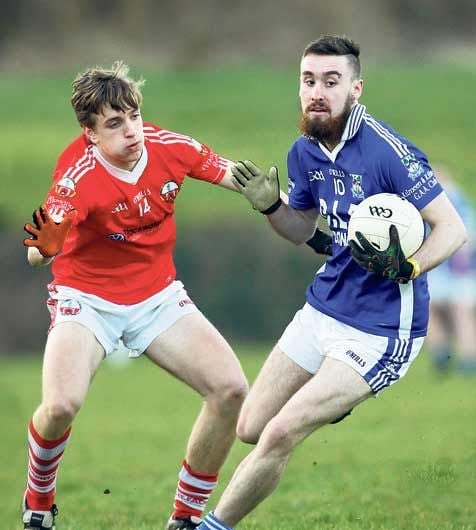 Kilmeen’s Cian McCarthy in action against O’Donovan Rossa’s Joe Lynch during this year’s Clona Milk U21 B football championship semi-final.

KILMEEN are hoping to claim the county U21 B football championship at the expense of Cill Na Martra in Páirc Uí Rinn on Friday evening in what has already been a memorable year for the Carbery club.

The blue and whites return to the venue where they finally annexed the county junior B football crown at the end of July following consecutive losses to Diarmuid Ó Mathúnas and Castlelyons the two previous years.

A comprehensive defeat of Grange was attained utilising the talents of a youthful squad and many of the players involved in that triumph will be togging out again tomorrow evening.

Kilmeen’s path to this year’s county decider began with lifting their Carbery divisional title following a narrow one-point win over Tadhg Mac Carthaigh in the quarter-finals and 1-15 to 0-10 defeat of O’Donovan Rossa in the last four.

Diarmuid Ó Mathúnas proved no match for Kilmeen in the divisional final going down 4-8 to 1-8 and qualifying the Kibree club for the county section in style. A 5-10 to 1-8 quarter-final defeat of Castlelyons and 4-9 to 0-9 semi-final win over Charleville sees Kilmeen in excellent scoring form ahead of Friday night’s final.

Cill na Martra should provide the West Cork club with their sternest test to date however, having overcome Passage and Dromtarrife to qualify for this year’s U21 B decider.

Much of Kilmeen’s hopes rest on the shoulders of Damien O’Gorman and Shane O’Donovan. The two young forwards have dovetailed superbly up front during their club’s march to the final and were equally impressive in helping their juniors claim county glory.

O’Gorman’s free-taking ability will be pivotal to Kilmeen’s chances of success whilst O’Donovan’s eye for goal (he netted twice in the junior’s county final win over Grange) should pose plenty of problems for Cill Na Matra’s defence.

This is a solid Kilmeen team from one to fifteen however and one that has come up through the Carbery and county ranks together from an early age. Playing in Páirc Uí Rinn will not faze a talented squad that appears more than capable of adding another title to the trophy cabinet at the expense of Cill na Martra.