Michael Burns pictured playing with Cork against Kildare in a league game in February 1984. 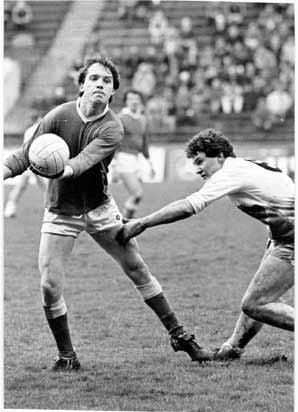 Michael Burns pictured playing with Cork against Kildare in a league game in February 1984.

CASTLEHAVEN GAA Club is mourning the loss of one of its greatest sons, Michael Burns, who died suddenly earlier this week and was laid to rest today (Friday).

Burns – survived by his wife Anna and sons David and Keelan – is regarded as one of the club’s finest products, having enjoyed a stellar club and inter-county career.

A versatile player, he could play corner back, centre back, midfield, centre forward or full forward.

Highly-rated as an underage player with Castlehaven, he won divisional titles at U14, U16, U18 and U21, and he captained the club to the South West U21 A title in 1982.

Burns a was major player in the club’s first U21 county final victory, in 1981, against Na Piarsaigh.

A senior footballer in the late 1970s, 80s and 90s, Burns played midfield for Castlehaven in the famous county semi-final victory over the All-Ireland club champions, Nemo Rangers, in 1979.

The talented footballer lined out at centre back on the Haven team that won the club’s first senior title in 1989 when they beat the Barrs in the county final, and then they went on to defeat St Senan’s of Clare in the Munster final.

Burns won two senior county titles (1989 and 1994) and three Munster club titles (1989, ’94 and ’97). Castlehaven represented Cork in ’97 in the Munster club championship because Beara won the county but could not represent Cork in the provincial series.

On the inter-county stage, he played with the Cork minors in 1979, lining out at corner back in the drawn Munster final, and then midfield for the replay, which Cork lost.

The Castlehaven clubman won a national league medal in 1988/89 and a Munster championship medal in ‘89. He retired from inter-county football after the ’89 season.