SEASONED campaigners Castlehaven had to dig deep to see off newcomers Éire Óg before guaranteeing their spot in the knock-out stages of the Bons Secours premier senior football championship.

With two wins from two games, and a meeting with Carbery Rangers to come later this month, Castlehaven are assured of their place in the next phase of the championship thanks to their three-point win in Enniskeane recently.

Two goals by the Hurley brothers, Brian and Michael, in the first quarter seemed to indicate a safe passage for last season’s finalists but each time the Haven opened a gap in the scoring, Éire Óg fought back bravely. The result was that a seven-point lead in the first quarter was wiped out and the scores were tied at half time.

Again, in the third quarter the Haven surged into a five-point lead but that was reduced to a single point by the 55th minute and the issue was hanging in the balance. Credit to the Haven who responded well in the closing minutes, lifting their game again to kick four vital points in a row as they emerged deserving winners by three points.

‘We started very slowly, next thing we sprung into life, the two Hurleys were on fire, great goals,’ explained Castlehaven manager James McCarthy.

‘Éire Óg came at us again, they drew level and we only scored one point in the second quarter. We could have made a raft of changes at half time, but we trust the players we have, that they would sort things out. We had a great third quarter, then we died a bit again in the last quarter. We had a five-point cushion and if you lost that, you’d really be kicking yourself. 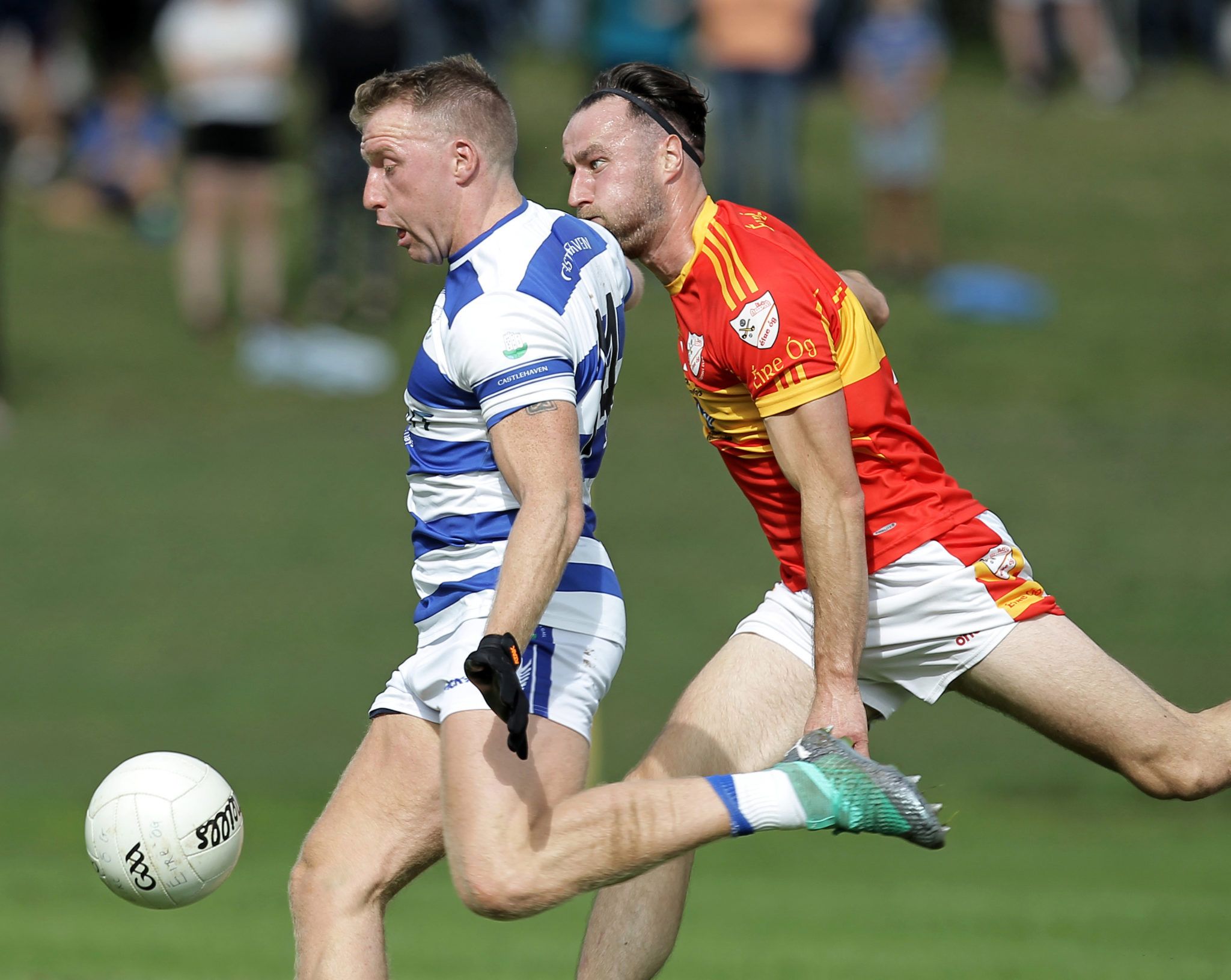 It started well for the West Cork men when Michael Hurley, in the very first attack, blazed over the bar with a goal chance beckoning. Cathal Maguire added a point as the Haven hit the ground running. Undaunted, Éire Óg battled back and a Ronan O’Toole point was followed by a goal from wing back Diarmuid Dineen in the fourth minute, set up by impressive centre forward Colm O’Callaghan.

But with the Hurley brothers causing havoc up front, it was all Haven for the next ten minutes. Goals from Michael in the ninth minute, set up by Brian, and by Brian in the 13th minute, set up by Jack Cahalane, supplemented by points from the influential Mark Collins, Michael Hurley and Brian Hurley (free) had the Haven in front by 2-5 to 1-1, in complete control. A late free and 45 by Daniel Goulding made it 2-5 to 1-3 at the water break.

Éire Óg continued their improvement into the second quarter and limited the Haven to a single Brian Hurley point as they kicked six points themselves, a pair each from Goulding and O’Callaghan. Éire Óg were the happier side at half time as they retired level, 1-9 to 2-6.

Castlehaven upped their game again in the second half, opting to take their points, and we saw four fisted points from the impressive Conor O’Driscoll and hardworking Cathal Maguire as the Haven raised nine white flags. Éire Óg responded with four as the pace never eased off and it was 2-15 to 1-13 at the water break.

Once more, looking in control, the Haven eased off starting the last quarter and when a breaking ball was finished to the Haven net by Dylan Foley, followed by a point from impressive sub Rian O’Flynn, there was only a point between the sides with time almost up. Not for the first time in the game, the Haven showed the ability to lift their game when threatened and four points in a row in injury time from Brian Hurley (play and frees), Jack Cahalane and Conor O’Driscoll put the seal on a deserved victory, although brave Éire Óg finished defiantly with scores from lively Dermot Herlihy and Dylan Foley. 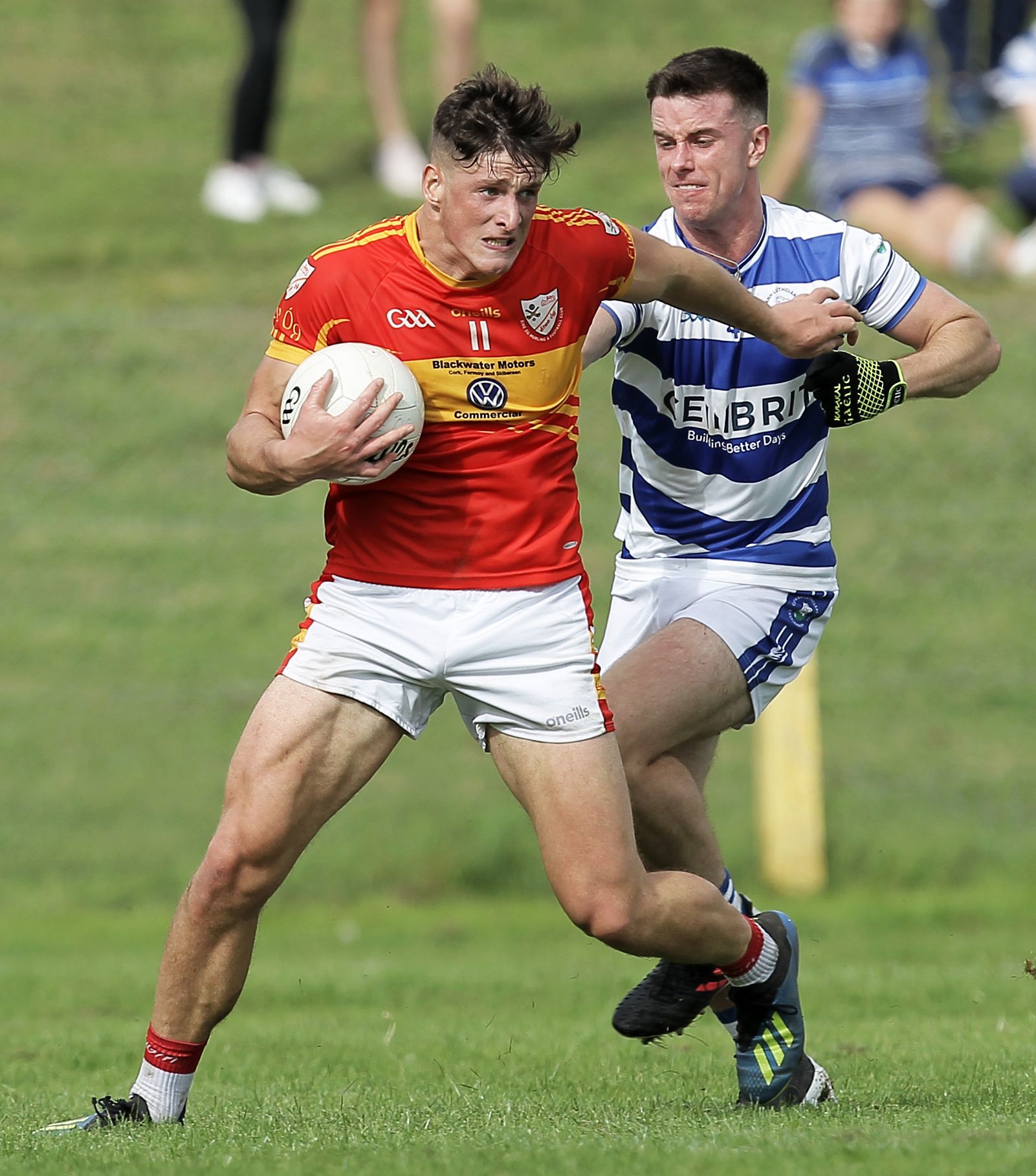 In a fast-paced, free-flowing game, the Haven were thankful to the Hurley brothers who accounted for 2-8 between them, while Conor O’Driscoll had a fine second half, with four points to his name. For Éire Óg, who showed they are well able for the premier grade, their midfield pairing of Ronan O’Toole and Jack Murphy were highly effective, and in defence, Dermot O’Herlihy was a real livewire, with good support from John Mullins, John Cooper and, especially, Diarmuid Dineen.