GLORY, glory, Beara Community School. The West is well and truly awake after the Beara school’s brilliant band of brothers won an All-Ireland football title for the first time since 2010.

‘These lads had fire in their bellies and gave it every last drop of energy they had to get us over the line,’ Beara joint-manager Dara Crowley told The Southern Star shortly after the school’s historic – and dramatic – triumph.

A day never to be forgotten for Beara Community School, their players, joint-managers Dara Crowley and Cian O’Connell plus a loyal band of supporters ended in tears of delight with All-Ireland senior D football final success in Gurteen, Clare.

The rural West Cork school claimed their first All-Ireland trophy since 1995 after a magical campaign that has included Munster glory – but last Saturday was the day when they scaled the All-Ireland summit.

The Br. Edmund Ignatius Rice Cup will reside in Beara Community School for the next 12 months thanks to a dogged performance in seeing off 2014 and 2017 All-Ireland champions, Our Lady’s College from Belmullet.

‘It is hard to put all of this into words, to be honest,’ Dara Crowley said.

‘It is a dream come true for the lads. They set this target but to actually accomplish it, they are looking around and saying that they can’t believe they are All-Ireland champions.

‘To win a Munster title was fantastic but to go on and win an All-Ireland in the same year is something extra special. Everyone is exhausted after the final but they gave absolutely everything they had today. We just had enough in the tank to get over the line.

‘We were six points down in the second half at one stage. That’s when the lads had to dig deep but they responded. We couldn’t be prouder of them.’

Fintan Fenner’s goal settled Bera after nine minutes but that was the Mayo school’s cue to crank up through the gears. Brendan Conway and Charlie Ginnely raised green flags in quick succession to build the first of two six-point leads.

Credit to Beara who reduced the deficit to three at the break, thanks to Tommy O’Sullivan, Mikey Orpen and Tom O’Connor efforts. A converted Brendan Conway penalty put Belmullet back in the driving seat shortly after the restart however, but once again Beara CS dug deep and mounted a comeback.

‘Belmullet are two-time All-Ireland champions and really put it up to us,’ Crowley explained.

‘We knew we were going to be up against it. They are an experienced team with experienced management who had their homework done on us. It came down to a war of attrition and who wanted it more.

‘That’s when the willingness to do whatever it took and the never-say-die attitude of our group shone through. It took everything we had but the lads got there in the end.’ 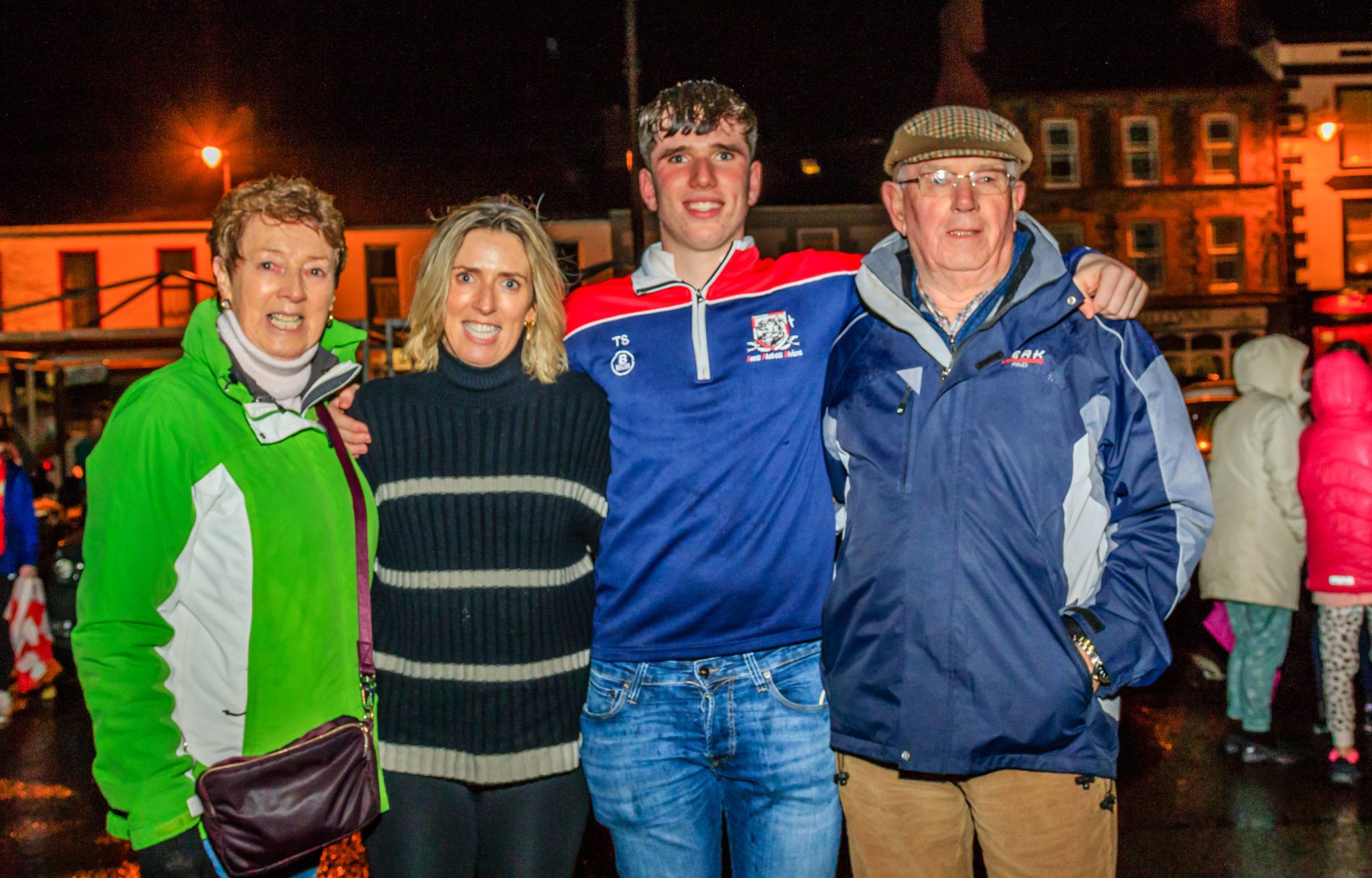 Tiernan O'Sullivan with his proud mother Orla and grandparents, Siobhan and Mick O'Shea.

It was Beara’s third-quarter revival that helped secure this famous All-Ireland success. They earned a spot-kick less than a minute after conceding a penalty at the opposite end. Fintan Fenner made no mistake to revive his school’s fortunes. Gerard O’Shea kept Beara on the front foot with some well-taken points and needed to as Belmullet hit back.

An engrossing All-Ireland decider’s major turning point came seven minutes from the end. A flowing Beara Community School move, begun deep in their own territory by Niall O’Shea, ended with Dylan Crowley firing into the net from close range. Beara saw out the remaining time before their players and a huge number of supporters celebrated the school’s magical 3-11 to 3-9 All-Ireland final triumph.

‘The support we got today was unbelievable,’ the Beara CS joint-manager Crowley stated.

‘In fairness to the Beara crowd, they are always willing to travel to support the team. We were in a dogfight but they got behind the team and carried us through. The team fed off that. The tougher the situation got the harder the boys tried. They are just one of those teams that doesn’t shy away from a fight.

‘The lads deserve this success. All the training and commitment they have put in. The consistent numbers we have had at training made a huge difference this year. They are just a great bunch of players. It took a massive effort to get over the line in Munster and now the All-Ireland. We are just so delighted for them. They deserve all the plaudits coming their way. These days don’t come around too often so we have to soak it all in. This success is what makes it all worth it.’