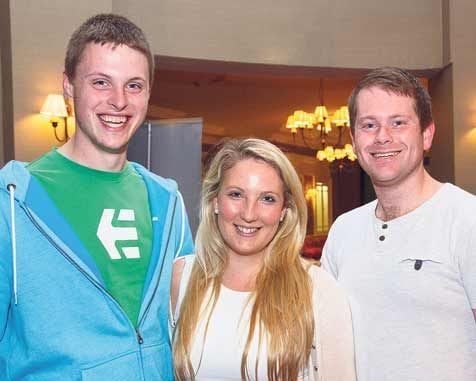 ONE of the most popular sports in West Cork has received a significant boost as a new sponsor has come on board.

At the recent launch of the South West coastal rowing season, held in the Celtic Ross Hotel, it was announced that the Rosscarbery hotel is now the flagship sponsor of this competitive championship, ensuring a big year of coastal rowing lies ahead for the South West’s nine clubs.

At the launch reception, Neil Grant, General Manager of the Celtic Ross Hotel, commented: ‘We are delighted to take our partnership with the South West Coast Yawl Rowing Association (SWCYRA) to the next level through becoming their flagship sponsor.

‘We have enjoyed a great relationship with the SWCYRA and we continue to support their ongoing initiatives. We are looking forward to an exciting series of championship races throughout the summer.’

The five regattas making up the Celtic Ross Championship will take place in Glandore on June 21st, Baltimore on June 28th, Union Hall on July 5th, Castletownshend on July 12th and Schull on August 9th.

The South West will also host the Cork county coastal rowing finals this year in conjunction with Courtmacsherry Rowing Club at their superb Broadstrand venue on the August bank holiday weekend.

At the recent launch, June McCarthy, chairperson of the SWCYRA, sincerely thanked the Celtic Ross Hotel for their continuing generosity.

Each year the South West strives to become bigger and better for its members and this year is no different. Two key initiatives announced by June McCarthy are the launch of a new promotional video for social media purposes, targeting younger audiences, and further training support for the clubs to ensure the highly competitive standard of the South West coastal rowing clubs can be maintained.

Chairperson June McCarthy stated: ‘initiatives commenced last year have gone from strength to strength – our coxswain training course, with just nine attendees in its first year, grew to 24 attendees this year, ensuring continued development of the next generation of rowing coaches for the sport in West Cork.’

Looking back on the South West’s considerable success in the All-Ireland championships last year, McCarthy continued ‘although we had some fantastic results, it’s clear that we have to continue to evolve in terms of our training approaches and techniques, to ensure we can continue to maintain our traditionally high competitive standing at a national level’.

With nine member clubs based in the coastal communities of West Cork, the popularity of coastal rowing as a sport lives on and the level of competition continues to grow, promising an exciting and action-packed summer season ahead.