St Mary's Stephen Keohane holds off the challenge of Bantry Blues' Kevin Casey during the Rowa/Rowex Pharma junior A football championship round two game at Dunmanway on Sunday. 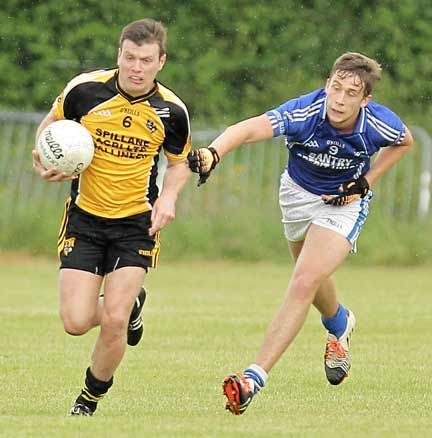 St Mary's Stephen Keohane holds off the challenge of Bantry Blues' Kevin Casey during the Rowa/Rowex Pharma junior A football championship round two game at Dunmanway on Sunday.

FOUR of the five teams that will be involved in the South West JAFC relegation battle are now known after a busy weekend of second round action.

Clonakilty, Ballinascarthy, St Oliver Plunkett’s and Bantry Blues are all thrown into the relegation scrap, and they will be joined by the loser of Argideen Rangers and Clann na nGael, who meet next weekend.

Mathúnas came from four points down with 20 minutes left to beat Clonakilty 1-15 to 0-13, with Padraig O’Driscoll’s goal capping off a fantastic comeback, while St Colum’s scored 1-8 in the final quarter to blow Bal away, 1-14 to 0-8, as Denis McSweeney grabbed a crucial goal and Sean O’Shea finished with 0-8 (7f) for the winners.

Elsewhere, Bantry lost 1-11 to 0-5 as champions St Mary’s got back to winning ways with a very easy win. They led 1-5 to 0-2 at the break, Eanna Kelleher with the goal. The second half saw the Saints pull away in a game where they were never troubled.

Last year’s semi-finalist’s Plunkett’s are in trouble after a 1-10 to 0-10 loss to Muintir Bhaire, as Frankie Arundel was the star of the show with 0-4, while Brendan O’Dwyer scored a second-half goal for the winners.

Don’t miss this Thursday’s Southern Star for full reports and reaction from this weekend’s South West JAFC action, plus the round three draw.