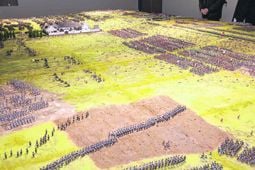 Some of the 15,000 soldiers on display in the ‘Battle of Waterloo’ exhibition at the Toy Soldier Factory Visitor Centre in Kilnamartyra.

FOR the first time ever, over 15,000 toy soldiers have been assembled in one place.

The venue for this world exclusive is Europe’s only toy soldier factory – in Kilnamartyra, near Macroom.

The Prince August Toy Soldier Factory scored a major coup by getting, on loan, a replica Battle of Waterloo scene, kindly donated by the owner.

When Kilnamartyra factory owner Lars Edman saw the display, he knew the perfect place for it was his own toy soldier ‘home’ in West Cork. 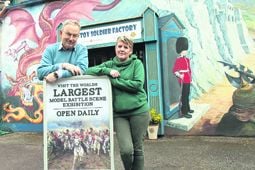 The exhibition, which opened to the public on Sunday, sees the thousands of tiny figures mounted on diorama boards decorated with replica grass, walls, and buildings – all part of the mini battlescene.

Lars had the exhibition pieces shipped over from Cologne for Sunday’s opening, which featured a wonderful explanation of the battle by Prince August webmaster Michael O’Brien. The exhibition will be in situ for five years, but this is the first phase, says Prince August’s Mary Moynihan. ‘Phase Two will involve an audio visual display, but that will be next year,’ she told The Southern Star.