Marie Farrell: evidence was recalled in court this week 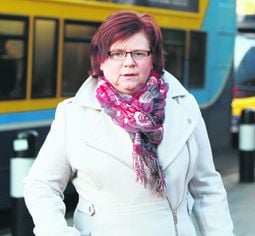 Marie Farrell: evidence was recalled in court this week

IAN Bailey did not appear to be a ‘very troubled individual’ when reciting a poem for a video of the Christmas Day swim in Schull in 1996, a local woman has told the High Court.

Florence Newman from Schull said she ‘got a fright’ when she saw scratches ‘like squiggles’ on Mr Bailey’s right hand after he responded to her extending her hand to him to wish him a Happy Christmas. This happened after he recited a poem for her while she was filming the Schulll swim with a camcorder.

‘I knew when I shook hands with him that I got a fright.’ The scratches struck her as unusual, she wondered how they got there.

She said she still speaks to Mr Bailey but it was ‘not the same’. There was not ‘a conscious shunning’ but people did not want to get involved and it was ‘human’ for that to happen, she said. Mr Bailey did re-emerge into society, ‘maybe not at the same level’.

Ms Newman was giving evidence in the continuing action by Mr Bailey against the Garda Commissioner and State over the conduct of the investigation into the murder of Sophie Toscan du Plantier whose body was found near Toomore. Schull, on December 23rd 1996. The defendants deny all of Mr Bailey’s claims, including wrongful arrest and conspiracy.

Caroline Leftwick, from Skibbereen, said Mr Bailey was due to collect seed garlic from her on December 23rd 1996 but phoned some time before 1pm to say he wasn’t coming, there had been a murder and he had the story. She said she had asked who was killed and Mr Bailey said it was no one she knew – a French woman.

Ms Leftwick said she only took one call but he may have spoken to another member of her family. When told her husband gave a time of the call between 12pm and 2pm, she said her husband was not very good in relation to times.

Linda Morgan, owner, with her husband, of the Schull golf clubhouse in the late 1990s, said Marie Farrell worked for another woman at the clubhouse restaurant and had no responsibility for locking up the premises.

Ms Morgan said she knew nothing about an alleged incident where Ms Farrell said Sgt Maurice Walsh exposed himself to her in the ladies toilets. Sgt Walsh has denied any such incident occurred.

In a statement to the court, Bernie O’Shea said she employed Ms Farrell from 1997 at the clubhouse restaurant. It was not a regular occurrence for her to lock up the premises and she knew of no reason she would be cleaning the toilets.

Ms Farrell never told her she was attacked in the ladies toilets. Ms Farrell was ‘always blabbing’ she said, and, if that had happened, she believed Ms Farrell would have told her.

Nina Hickey said she and her husband were good friends with Sgt Maurice Walsh in the late 1990s and went for dinner with him and his wife at Schull golf club one summer’s evening to celebrate with Sgt Walsh. There was no incident of any kind at all and Sgt Walsh was ‘most definitely the most upright citizen I could wish to meet’.

Bernie Griffin Sheehan said she let properties in Schull from 1996 to Marie Farrell and her family but they failed to keep up rent payments, and she had great difficulty getting them out of their house.

Earlier, the court heard that Ian Bailey was upset and crying when he put his arms around a man and said: ‘I did it, I did it’. Richie Shelley said, when he asked Mr Bailey what did he do, Mr Bailey said: ‘I went too far.’

Mr Shelley said this happened sometime after 2am on January 1st 1999 at Mr Bailey’s home at the Prairie, Schull, after Mr Bailey had been looking at newspaper cuttings about the murder of Sophie Toscan du Plantier.

Asked what he believed Mr Bailey was talking about, he said: ‘I think the murder was heavy on his mind because it was the main subject of the night.’

Mr Bailey was ‘obsessed’ with the murder and had earlier produced a shoebox of newspaper cuttings about it, he said. His understanding of Mr Bailey’s remarks was that he was admitting to murder.

Mr Shelley, then aged 24, said he was shocked by what Mr Bailey said and would remember it ‘until I die’.

Asked about Ms Thomas’ evidence that Mr Shelley was so drunk he could not have accurately remembered events that night, he said he did not accept that. He had had four or five drinks prior to going to the house and drank two cans of lager when there.

He believed his girlfriend Rosie, now his wife, had heard Mr Bailey’s remarks, made to him in the kitchen of the house. She was nervous and they left Mr Bailey’s home by foot shortly afterwards, he said. They were picked up by his father whom he had rung earlier for a lift home, but had not said anything to his father because he did not wish to worry him.

Geraldine O’Brien said she was working in Marie Farrell’s shop on June 28th 1996 when Ian Bailey came in looking to talk to Ms Farrell. Ms Farrell was quite nervous and asked her to contact Det Garda Jim Fitzgerald, she said.

Between November 2013 and February 2014, she said Ms Farrell, during a phone conversation about fees for courses being operated by Ms O’Brien in Cork, had said there was a case coming up in which Ian Bailey was involved. Ms Farrell said she had been told he would get substantial money, maybe a couple of million, and Ms Farrell would get some of that too, Ms O’Brien added.

She agreed Ms Farrell had denied making those comments.