Alan Kelly with his 'rock' - his wife Caroline 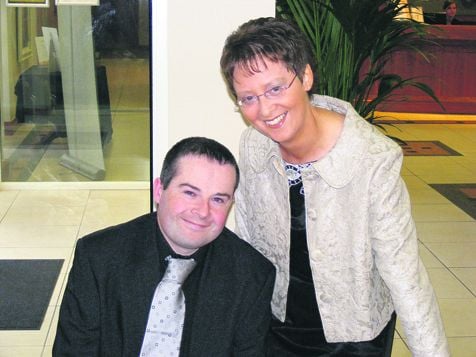 Alan Kelly with his 'rock' - his wife Caroline

WHILE some of us tremble at the thought of turning 40 years of age, it’s a different scenario for Alan Kelly from Cloughduv.

Born with cystic fibrosis, it’s an age Alan thought he would never see, and to celebrate the occasion, he’s going to climb Croagh Patrick this June.

It wasn’t until Alan was 37 years of age that he started to get seriously sick and discoverd that he would need a double lung transplant.

‘I was doing very well up until then but it was a rapid decline for me and within months I was down to 10-12% lung capacity. I was able to work remotely from home which was great, but my health got extremely bad, so a lung transplant was vital,’ said Alan, speaking to The Southern Star.

‘I had to go to the Mater Hospital in Dublin for a week of tests and x-rays to determine if I was bad enough to go on a transplant list. Also they had to check what blood group I was on, and also whether I was fit and able enough to come out of the operation the other side.’

Alan was subsequently given a two-year window in which to get the double lung transplant.

‘I had gone into the second year when I got the go-ahead for the transplant and it was a long operation but it happened so quickly that I didn’t have time to think about it,’ said Alan.

The fear never goes away and there is a need for constant health monitoring. Nevertheless, Alan feels it’s going very well.

His new lease of life has seen him back at work in the office and he has even joined a gym for the first time in his life.

He’s even preparing for the Croagh Patrick climb with his wife Caroline who, he said, has been his rock over the last number of years.

‘Now I’m thinking of the future and planning ahead and my 40th birthday is a day I can’t wait to see. I’m in the gym, playing pitch and putt and it’s the healthiest I’ve ever been.’

While Alan never met his donor, it’s someone that he thinks about every day and he feels that Organ Donor Awareness Week is vital for highlighting the need for organ donors.

‘For every donor that comes along, four to five people benefit from it and the most important thing is to discuss organ donation at home in a relaxed environment so that everyone knows the wishes of the donor in the event of an untimely death.’

Organ Donor Awareness Week runs until Saturday April 4th and during the week ‘forget me not flower’ emblems will be on sale throughout the country, from Irish Kidney Association volunteers.

The focus of Organ Donor Awareness Week is to raise awareness about the ongoing and ever increased demand for transplantation, which replies on the public for organ donation.

Organ Donor Cards can be obtained by phoning the Irish Kidney Association LoCall 1890 543639.

You can also Freetext the word DONOR to 50050 or visit the website www.ika.ie